About a month after Kaki, our seal mitted Ragdoll kitten, came home, we were on the look for another Ragdoll to fill our hearts with joy. Since Kaki was a present for me, I thought it would be nice for my boyfriend to have a kitty friend to love on and cuddle with. After showing him the many, beautiful varieties Ragdolls can come in, he chose to look for kittens with mink and solid colorations. The search was a little more intensive this time, as a kitten from Kaki’s breeder did not work out. Starting all over to find a reputable breeder with our desires was a little tough. After contacting around ten breeders, only one got back to us- Righteous Ragdolls of Wilmington, NC. My boyfriend got his pick of four, blue mink boys. It wasn’t long at all before deciding on the baby of his choice- as the one he chose was, by far, the cutest- in our opinion, of course! 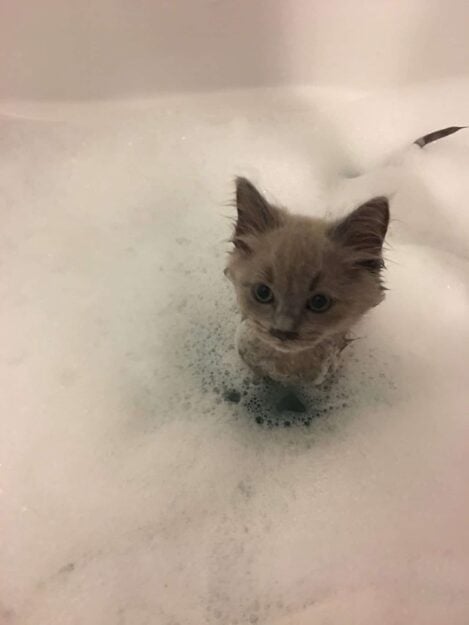 He decided to name his new baby Lycan. He was named after the word “lycanthrope”- meaning werewolf. Not only did he name him “Lycan” for personal reasons, he also thought Lycan resembled a wolf. 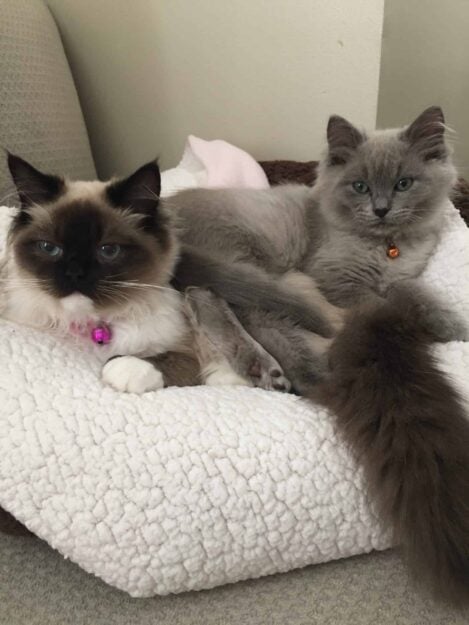 Lycan was born on October 18, 2016, which meant he would be ready to take home after Christmas. As far as Lycan’s breeder, Righteous Ragdolls, is concerned, I would neither recommend them nor steer away from them. We had what I would call an “okay” experience. Courtney, the owner of Righteous Ragdolls, is a very nice person. She will answer any questions you may have and is very good about getting in touch with you throughout your waiting process. About a week before we picked Lycan up, Courtney texted me saying Lycan had his wellness visit and everything looked great- except for the fact that he had a “kitten sniffle” and was on antibiotics. At the time of notification, I was not concerned, as I was expected for him to maybe be sneezing here and there: however, I was not pleased at the condition Lycan came home in. In fact, instead of going home after we picked him up, we took him straight to our local emergency vet. His snout was covered in discharge, every few minutes he would sneeze large amounts of mucus from his nose, and every now and then he would sneeze so badly the mucus would block his airway and he would not be able to breath. As soon as we got into the examination room, one of the veterinary technicians said, “It’s a shame a breeder let a kitten go home this sick!” He was tested with a combination test for feline AIDS, Leukemia, and heartworms, which came back negative. He was diagnosed with an upper respiratory infection- a bad one at that. We went home with more antibiotics- not only for him, but for Kaki incase she were to get ill, as well. One can make their own opinion about Righteous Ragdolls- I personally was uncomfortable with Lycan coming home with us so sick- especially after paying such a large quantity for Lycan, in the first place, and then paying hundreds more to make sure he was healthy. 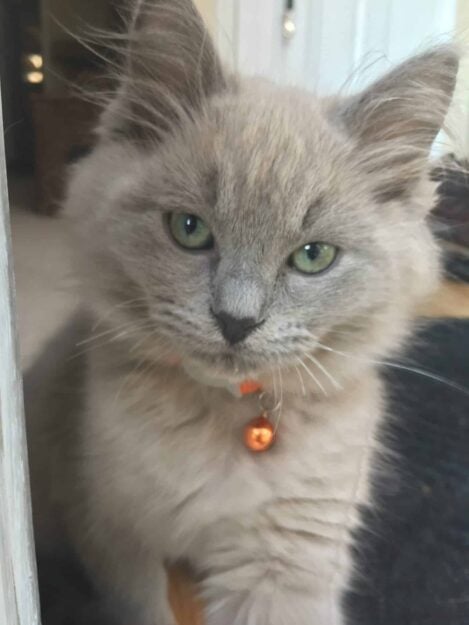 Kaki did not get sick, as we kept them separate his whole treatment period. We also kept them separate for smooth transitioning. We wanted to make sure Kaki and Lycan would be the best of friends, so we followed Jenny’s advise exactly. We are very pleased with Kaki and Lycan’s relationship now. They are the best of friends- playing and sleeping together! 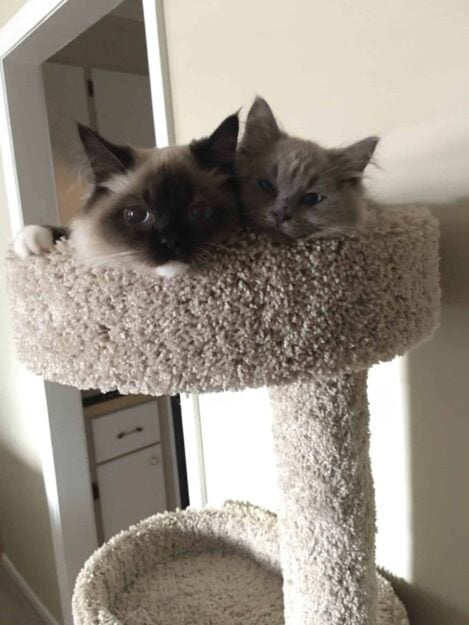 Lycan’s transition into our lifestyle was very smooth and effortless, as he was such a happy and cuddly boy. All he wanted to do was be around his daddy. Overall, Lycan is a very good boy. He does not get into trouble and he always wants to be around us! He definitely fits the stereotype that Ragdolls follow their owners around because that little booger is like a torpedo at your heals! 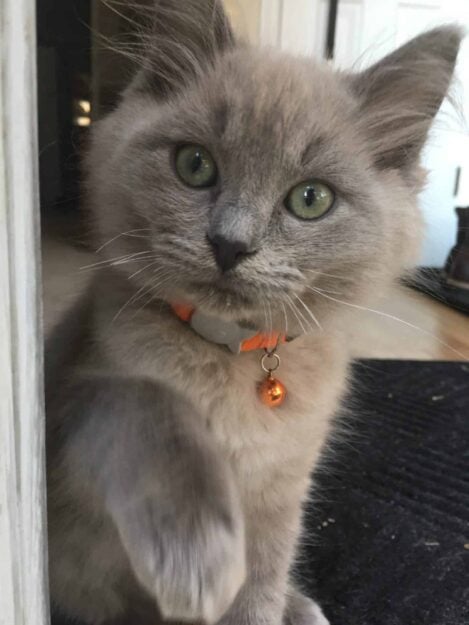 Both Kaki and Lycan are on Orijen Cat & Kitten formula and Tiki Cat canned food. Our goal is to get both of them on an all can diet by their first year, as we are in the beginning stages of transitioning to an all canned diet. Both cats love the two foods they are given and I would highly recommend each brand! 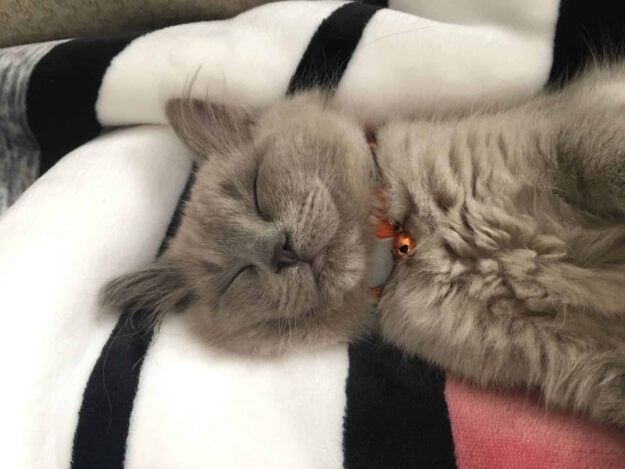 Lycan is a very mellow kitten. He sleeps most of the day- either with Kaki or one of us. He will play for maybe two or three hours and go right back to sleep! We think he is going to be a big boy because he has quite the large paws for his age (11 weeks).
Since he has Kaki to play with, I don’t see him playing with a lot of toys himself- other than his tunnel and a few balls. He does very much enjoy the cat tower and often shares and section of it with Kaki. One thing Lycan does not like is to be put on his back, so I cannot say he “flops” like some Ragdolls. I will say Lycan does very much enjoy playing in the presence of people. If Kaki wont play with him, he will shoot right over and beg one of us to play with him. 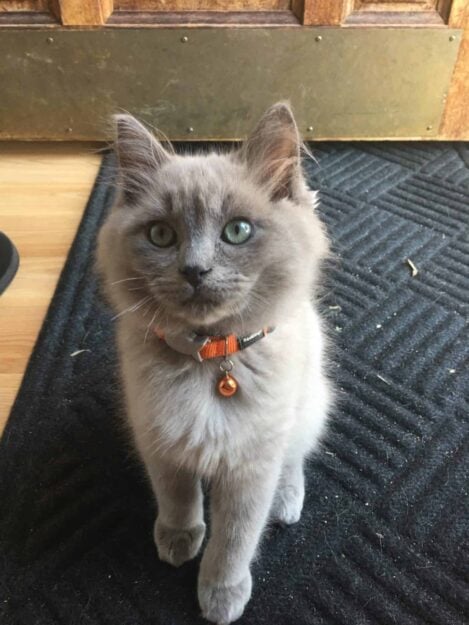 Overall we are very pleased with the new addition to our family. We love how cuddly and friendly he is. We cannot wait to see him grow!

3 thoughts on “Lycan – Ragdoll Kitten of the Month”