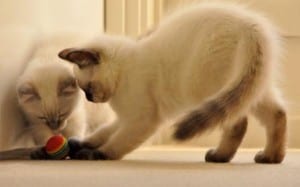 max and claude as kittens

Once-upon-a-time there lived a princess named Rebecca. The princess had such a perfect life. She had married a handsome prince named Paul and they lived happily together in their castle in the kingdom of Australia.  However, there was one thing that made the princess sad. The castle just didn’t feel like home without a cat.

Unfortunately Prince Paul was not a cat person and he thought that the castle would be more homely if they had a dog.  Luckily Princess Rebecca had an idea. If only she could find a cat that acted like a dog. Then Prince Paul would be happy and they would all live happily ever after! 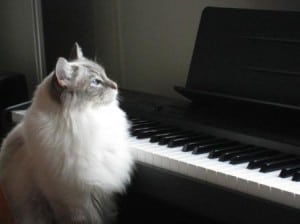 The princess took it upon herself to do some research.  She consulted the castle library and read all about different breeds of cat in a book called “the internet”.  She came across a breed called the “Ragdoll”.  It sounded just like the perfect match.  It was a big cat that loved to be around people and would follow its owners all around the castle. It even liked lots of cuddles. She was sure that Prince Paul would like this type of cat.

Prince Paul agreed that the “Ragdoll” might be just right for their castle. So Princess Rebecca arranged for them to go on a journey to visit Queen Debbie.  Queen Debbie lived in a palace called “Guysndolls Ragdolls” where she bred lots of the most beautiful big Ragdoll cats with amazing blue eyes. 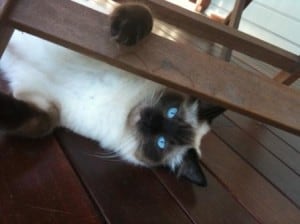 When Prince Paul got to cuddle one of her cats it was love at first sight.  The prince and princess decided to get two of Queen Debbie’s kittens, which were born on the 5th day of February in the year 2009.  They decided that the kittens were to be named Claudius and Maximilian after the famous Roman Emperors. Princess Rebecca felt that this was quite fitting, as they are such regal boys.

When the prince and princess got to take the new kittens home to the castle they were amazed at the difference they made to their lives.  Princess Rebecca was no longer sad, as she loved to spend time watching the boys’ chase each other all over the castle and also liked to sit quietly and brush their beautiful soft fur.  Prince Paul no longer wanted to get a dog as the boys would always greet him at the door when he got home, and Maximilian in particular loved to cuddle upside down on his lap for hours. Claudius especially loved to listen to the Princess play the piano and would come from any room of the castle just to sit on the back of a nearby chair when she started to play.

And so it came to pass that Claudius and Maximilian were the most spoilt cats in all the kingdom of Australia.  They loved to dine on freshly caught game (kangaroo mince) and the finest tuna in the kingdom.  They lounged on a purpose built pedestal (funkycat.com.au) , enjoyed a fresh smelling bathroom (Petmate Litterlocker Plus) and were just as happy as could be.

So it really was a happily-ever-after story.