My husband and I had been married for a couple of years when we decided we were ready to add to the family. I convinced him a kitten was the way to go. I have always loved cats since I was a little girl, especially the big, fluffy, loveable kinds. (I had 2 different cats named Fluffy growing up.) 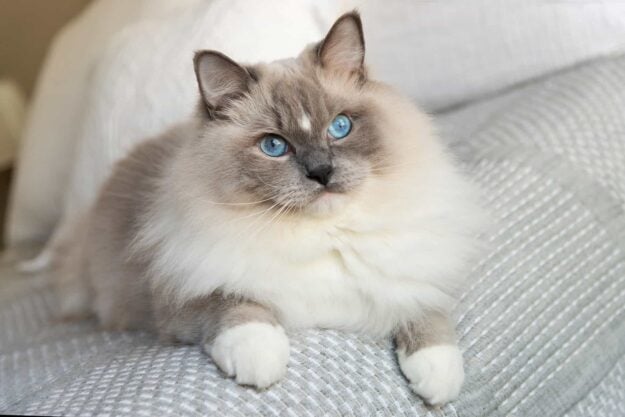 I wanted a purebred, so I began to look for local breeders who might have what I was looking for. I found one about 20 minutes away. She had two Ragdoll kittens available. I had never heard of Ragdolls, so I began to do my research and soon knew I needed one of these precious babies in my life. 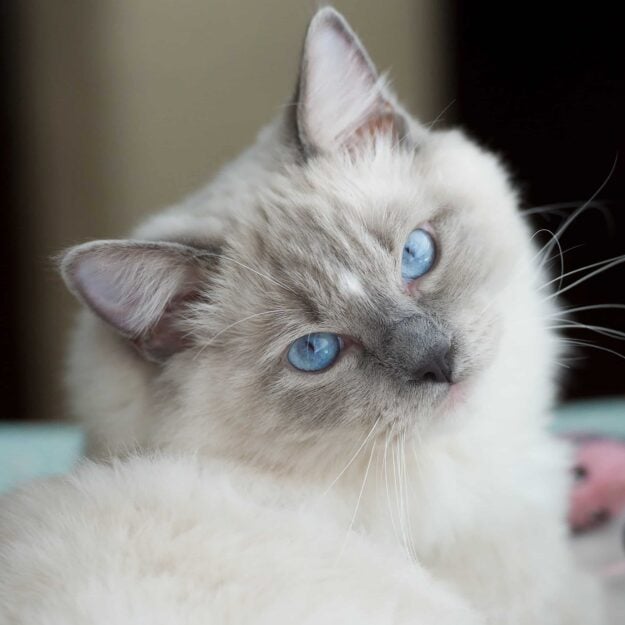 I called the breeder who was happy to let me decide between the last two Ragdoll kittens in her litter. When I met Leo and his brother, I knew Leo was the one I wanted because he had the cutest little face with a white blaze perfectly symmetrical between his beautiful blue eyes. 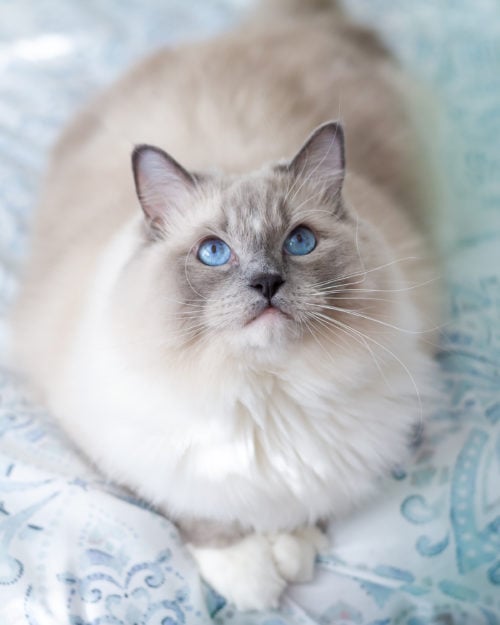 He was born February 28, 2018. He’s a blue mitted ragdoll and I named him Leo after Leo Dicaprio because of his handsome good looks and pretty blue eyes. We brought him home when he was 12 weeks old, one day before my husband’s birthday. At first my husband was skeptical about getting a kitten. He thought he would have preferred a dog. What he and I didn’t realize at the time was that Leo would soon have him wrapped around his little paw.

Besides their beauty, I decided I wanted a Ragdoll cat because of their easy-going personalities and affectionate nature. We soon realized Leo wasn't a typical ragdoll. He's a beautiful boy, but he isn't always affectionate. One day he’s all about being right there with us, following our every footstep, sitting or lying right beside us. The next day, he’s in his own little world. 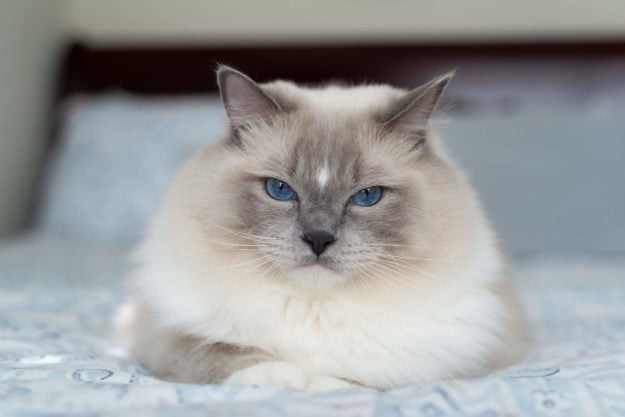 There are times he’d rather hide away under the recliner or bed and be left alone. He absolutely does not want to be held and cuddled. He will allow you to hold him for a little while if you’re standing or walking around, but don’t dare sit down! He doesn’t go limp and “flop” in your arms either. He will let you rub his neck and head, purring the whole time, but once he’s had enough, he lets you know, either by a love nibble or just simply walking away. He's the same with brushing. He’ll come running when I bring out the brush and lay down for me to groom him, but after a couple of minutes, he’s had enough.

He absolutely hates baths, vet visits, and leaving the comfort of his own home.

Like most cats, he also hates doors being closed. If we ever can’t find him, all we have to do is go into the bathroom and close the door and suddenly he appears, vocally letting us know this isn’t acceptable.

He loves drinking water from the bathroom sink and will sometimes wake us up in the middle of the night asking for us to turn on the faucet. 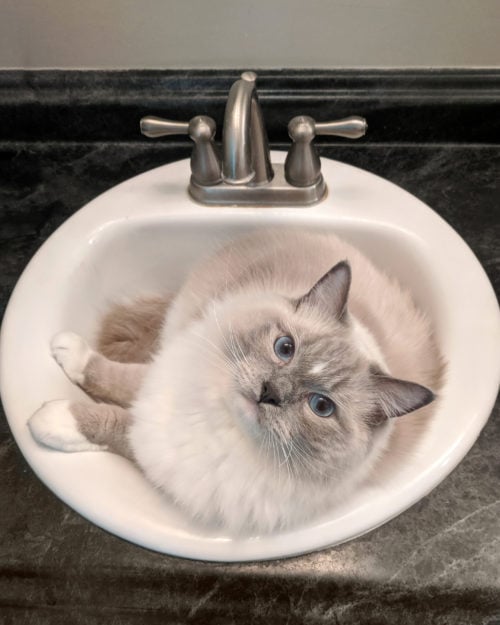 Speaking of bathrooms, one of his favorite napping spots is my husband’s sink. He loves to curl up there in the mornings and sleep while I get ready.

Most nights he sleeps on the bed, usually at our feet but sometimes directly on top of my legs. Sometimes I even wake up to him sitting on my pillow watching over me as I sleep. He’s also a good alarm clock. He makes sure we know it’s time to get up and get to work in the mornings by singing to us. He’s such a considerate kitty.

He loves long naps, afternoon treats, and most of all playing hide-and-go seek. He loves to “hide” behind doors and jump out and tag you on the back of your leg as you walk by. Then he takes off running, goes in his tunnel, and waits to be chased out to his next “hiding” spot. Sometimes I think we’re done playing, and he makes sure to let me know we are just beginning. He’ll lay in the hallway and meow over and over until you come look for him, then off he goes again, darting and sliding across the floor. 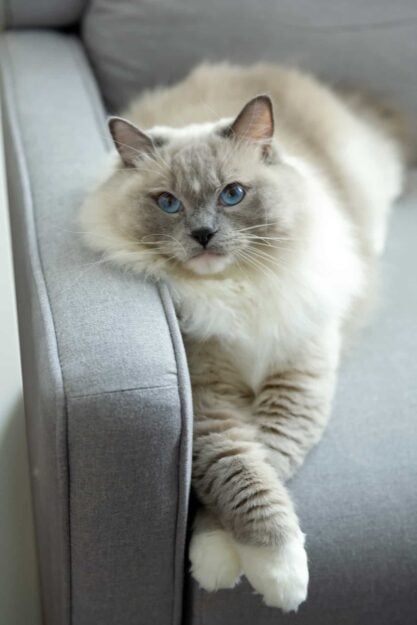 He does catch me by surprise sometimes when he hides behind a piece of furniture and jumps up the door frame at me just as I’m leaving the room. I think he really enjoys this activity.

He’s very inquisitive. He never fails to notice something new in the house. Whether it’s a new toy for him, new bedding for us (and him), new piece of furniture, or even a new dish towel in the kitchen. He notices things are new or different and has to check it out. Also, just moving a toy or chair to a different spot in the house will get his attention, and he goes right to it like it's brand new.

He's very helpful as well. He helps make the beds, do the laundry, fold the laundry, and inspect boxes and bags. However, vacuuming is not his thing. He will also point out if a bug is in the house, but never kills it. 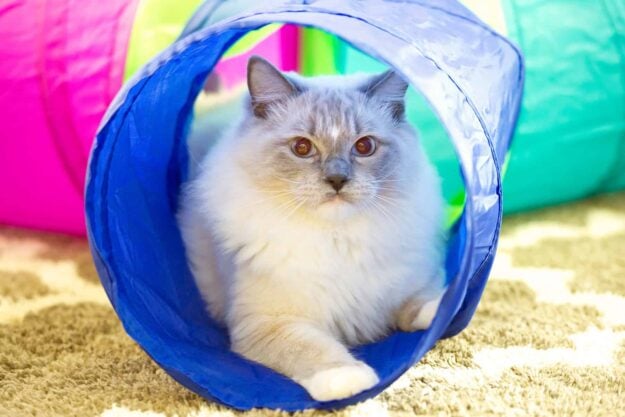 He’s a good kitty model for me too. He doesn’t mind posing for the camera, and he is quite photogenic.

He’s full of personality. He may not fit the typical Ragdoll mold. He may not have all the characteristics I was expecting as far as being a “lap” cat and craving affection. But he's brought so much joy and laughter to our home. Leo is such a sweet boy. To us, he’s purrfect.