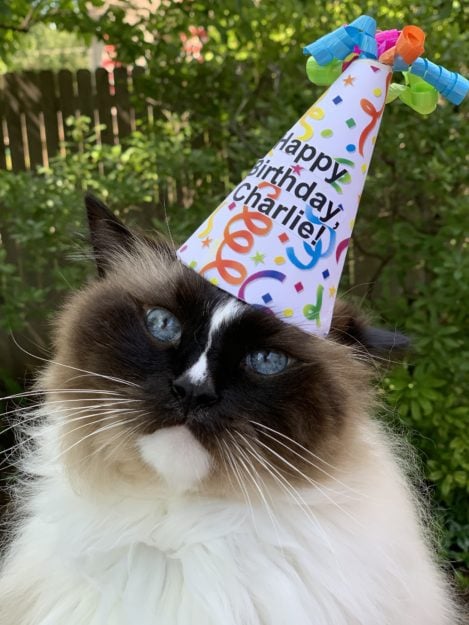 I look at that photo above and say in my head, “Oh, my Woo.”  As many of you know, I have many names for all “my” cats.  Charlie has many – Charles, Charlemagne, Woo-ee, Woo, Bub, Bubber, Zerzee and probably more I am missing that I will not remember until they just come out of my mouth.  I do not try to come up with them, they just come out of my mouth one day and it sticks.  My cats know all of their names.

I do call him “Charlie” a lot – Charlie’s name, I knew before I knew Charlie.  I picked it out years ago, knowing one day I would name my cat that. 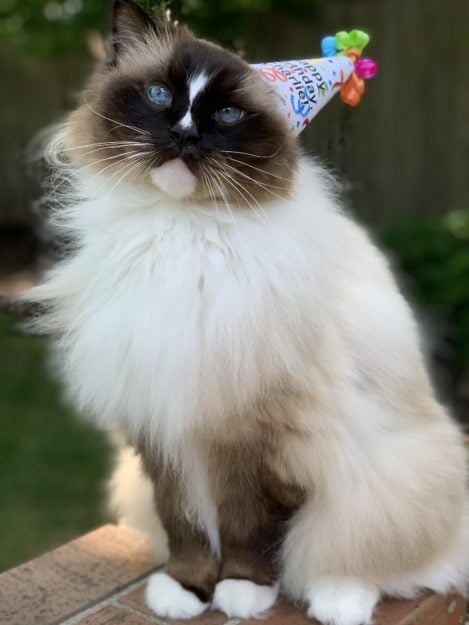 Charlie is the first cat I’ve had that openly shows how much he loves me like a dog would.  Charlie’s dedication to me reminds me of all of our German Shepherds growing up and their devotion to my mom.  While I truly detest breed stereotypes, Charlie does fit the Ragdoll cat description in being a puppy cat.

My family has a theory on blaze cats – that they are outgoing and Charlie fits the bill.  He is always around, always wants to be where the action is.  He is a curious cat, and also a very proud cat.  He also meows a whole bunch.  More than I am used to and more than my nerves can take sometimes.  Sometimes I have to say, “Enough!” to get him to stop.  But then I always feel badly afterwards.  My Rags (reason for Floppycats) hardly ever meowed, so I am not used to such a meow-er. 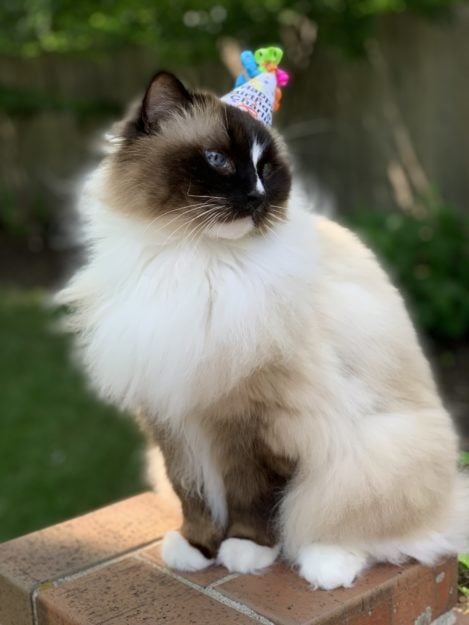 I have learned a lot from Charlie.  Many years ago, a vet from Scandinavia was watching one of our video and told me that Charlie had a crepe coat.  She mentioned that Charlie’s coat was a result of flat hair follicles and Trigg’s was from having round hair follicles.  She talked about how his coat was perfect for weather in Scandinavia because it takes forever to get wet – isn’t that the truth! 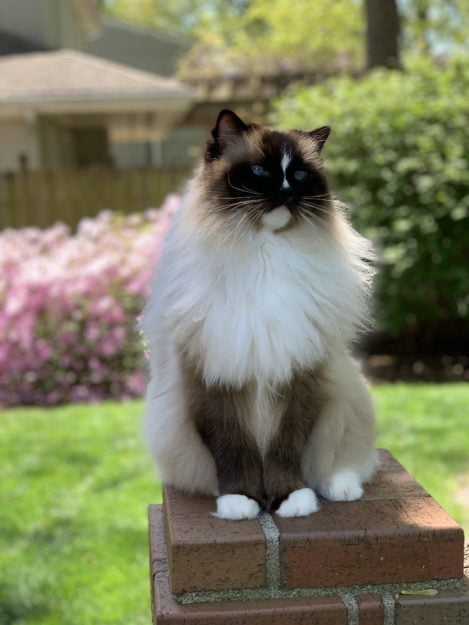 When Charlie and Trigg were 1-2 years old and got diarrhea more often, I would end up having the bath them and it took gallons of water to get Charlie wet – and not so with Trigg.  But the biggest “Ah-ha” I got from the flat hair follicle education was that Charlie wasn’t neurotic.  Rather, he can feel and sense things way more than Trigg (or any other cat I have had) can.

So when the wind blows, he feels it more sensitively than the rest of us.  For a long time, I just thought he was somewhat of a freak – but the flat hair follicle information helped me understand his behavior better in different situations.

Speaking of his coat, he’s the first cat I’ve had and been around that gets a visibly larger winter coat.  I mean, like night and day.  I tried to find comparable recent comparison photos, but the above was the best I could do.  The photo above on the left shows his winter coat in full bloom, whereas the one on the right shows his summer coat – always thinner and it looks like he has lost weight, but he hasn’t.

His coat matches his eating habit too – Chiggy eats about the same all-year around.  However, Charlie is very sensitive to heat and humidity and will eat less when it’s very hot and very humid.  I have to really watch him in the summer because of this.  He reminds  me of a true wild animal that packs on the pounds in the winter and then sheds them in the summer. 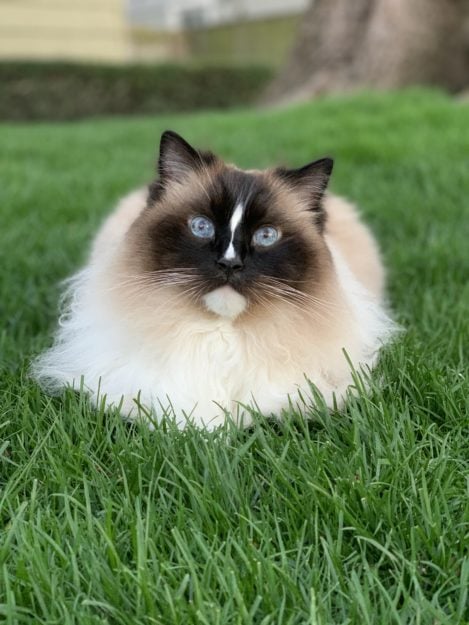 When his winter coat is in full bloom, he gets these little ear sprouts – they appear between the ears on either side of the top of his head – not talking about the hairs inside the ears, but rather on the outside of the ears on the top of the head.  I love them – they make me squeal. 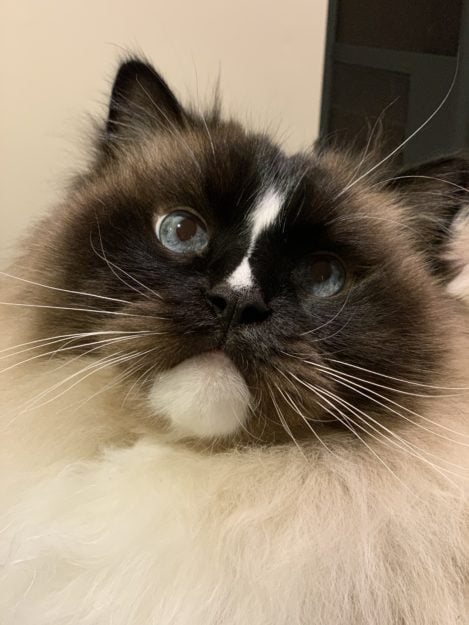 I rely heavily on my intuition.  In fact, I often don’t have an explanation for decisions I make or things I go after – it’s just a “I know because I know” type of thing.  That was the case with Charlie. 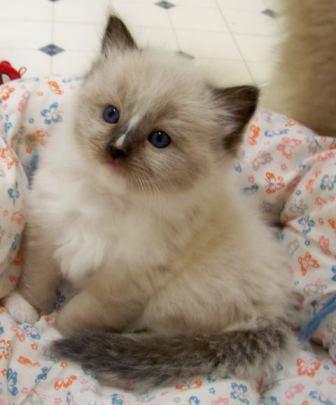 When I saw the photo above on his breeder’s website in August of 2009, I knew he was mine – knew in my gut.  Almost felt bad about it because my Rags had only been dead 4 months.  I had always wanted a seal mitted with a blaze because the very first Ragdoll I ever loved was seal mitted with a blaze – his name was Halston and he is pictured below.  I was 6, and I adored him.

Being a blaze cat, Charlie’s outgoing-ness and willingness to make eye contact with me makes him an awesome model and product tester.  He helps me tremendously with Floppycats and believe he understands the importance of his role. 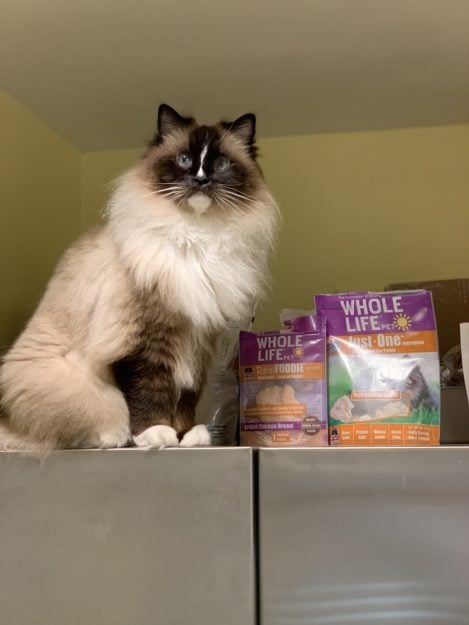 Charlie makes everyone smile.  Just his presence or his photo will make someone smile.  He really has that effect on my Dad – which is unusual.  My Dad isn’t a cat guy in general – he succumbed because he had a daughter who was obsessed.  I will sometimes randomly text photos of Charlie to my Dad (who is not on social media) and say, “Charlie wanted to know if he made you smile.”  My Dad always says it works.  You better believe my Dad will be getting a Charlie photo text today =). 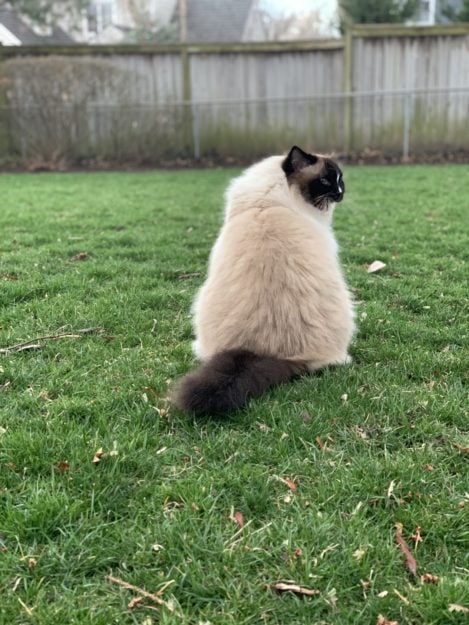 Charlie is a superior hunter.  Although not the athlete that Trigg is, he catches many rodents and other small mammals outside – when we go outside – which Charlie MUST do or he will get severe cabin fever.

He loves to go outside – but unlike Chiggy, who enjoys the view, Charlie prefers to walk the perimeter and make sure no one has messed with his yard.  He is very territorial and protects his lair.

During our city’s shutdown, I had let the cats outside towards the end of a business phone call.  I had also left the door open to the house because my windows were open, and the air outside was a perfect temp.  I went inside to grab something before coming out, and as I was coming out of the house, Charlie was trotting into the house with a chipmunk in his mouth – so proud of his catch.

In horror, without being able to say anything, because I was on the phone, I turned him around and then told him to drop the chipmunk.  It broke my heart to tell him he had to release his catch – but I wasn’t going to watch that unfold.  Luckily, he had only caught the chipmunk, and it ran away unharmed.  Charlie, on the other hand, was very disappointed with me! 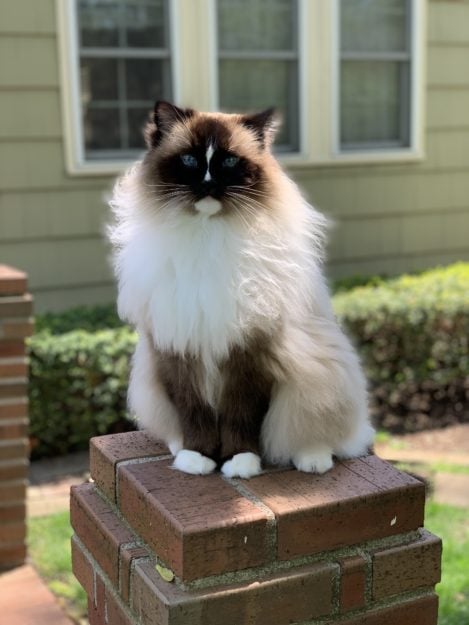 Charlie has gotten more and more affectionate with me as he has aged.  Nearly every day, whether it is at night or in the morning, he comes up on my stomach, sits down and waits for me to give him neck scratches.  He also started head butting me a little later in life.  He gets excited when I wake up every morning (runs to scratch on his Turbo Scratcher). 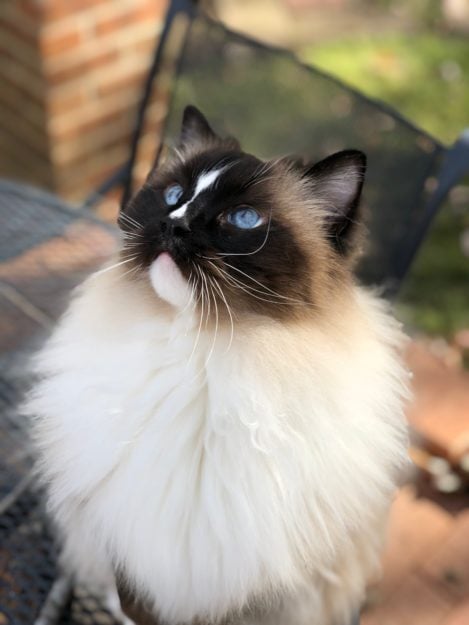 He’s a great cat, and I am so very fortunate to have him.  He is full of personality and has a joy and curiosity for life that I envy. 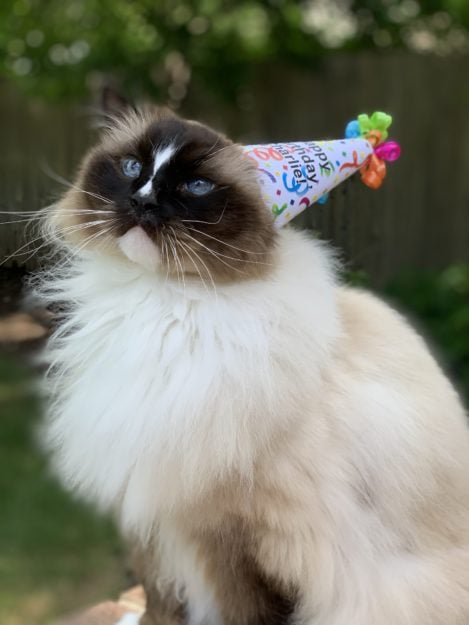 I do not know how much longer I have with Charlie, but I tell him he has to live until he is 30.  I really cannot imagine Floppycats without him.  It awfully hard to get Chiggy to pose with a product – Charlie makes it easy…and I realize how true that is when I try to use my parents’ Ragdoll cats, Caymus and Murphy, to be models with a product too.

Happy 11th Birthday, Charlie and many, many, many more!