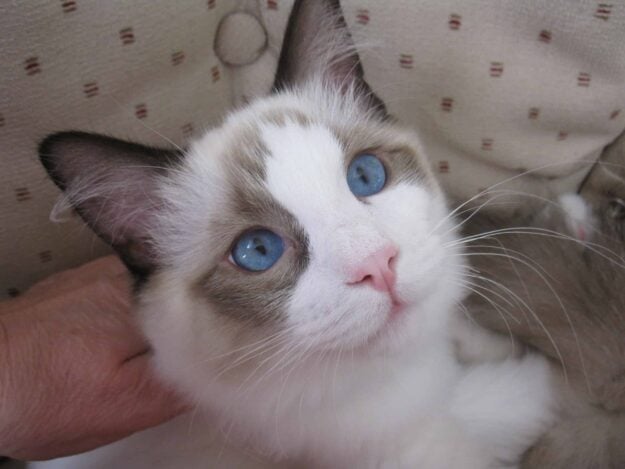 Meet my beautiful boy, Jaspurr, a member of the Australian branch of the Ragdoll cat tree! We live on the beautiful Central Coast of New South Wales close to the Pacific Ocean. I adopted my blue-eyed boy when he was 13 weeks old. He is a seal bi-color. He’s now 20 months old and has grown to be a gentle giant! He is an absolutely perfect pet and a great ambassador for the Ragdoll cat breed. I lost my beloved Cavalier King Charles Spaniel Toby a while back. He was my wonderful constant companion. I paint portraits of pets on river rocks and he was always at my feet keeping me company in my studio.

About 2 years ago, I thought about getting another dog and I thought a small rescue dog would be the way to go. I studied our Australian websites for small rescue dogs. There were plenty to choose from, but for some strange reason a Ragdoll cat was included in the dog section. There was even a video by the foster mother showing how gentle this breed was. This piqued my interest so I started researching the beautiful Ragdoll. I read everything I could find and watched every video several times (including Floppycats videos where I got to know Trigg and Charlie.) I purchased Jenny's book "A Ragdoll Kitten's Care Guide" on line and found it very helpful. I highly recommend it.  I learned a lot from Jenny’s advice and her experience with Ragdolls. 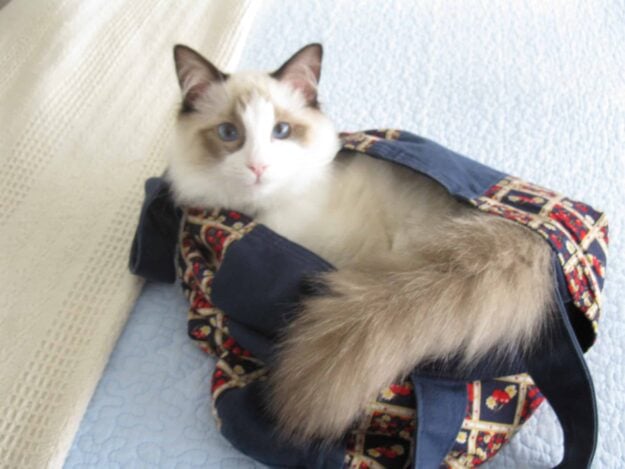 I soon fell hopelessly in love with this beautiful breed. Now I just needed to convince my husband to share our home with a cat. As expected, it was a resounding NO because he wasn’t a fan of the feline species. I encouraged him to watch the Ragdoll videos. He couldn’t disagree they were unique, so he reluctantly agreed for me to adopt a Ragdoll kitten. I started the search for my perfect fur baby. I found a breeder, Sue of “All Dolled Up” Ragdolls here in New South Wales and enquired about a kitten. She sent me a photo of a little seal bi-color boy she was holding to see if she wanted to keep him herself. She emailed me again in 2 weeks and told me I could have my choice between him and 2 others. I fell in love with the kitten in the photo and promptly named him “Jaspurr”, so he had a name when he came to us. We live in a villa with limited space, so we used our bathroom for his “safe room” and kept him there for a couple of days. He cried all night, but he finally settled down. It was hard to ignore him, but Sue told me that’s what I needed to do. He and I bonded quickly and he adopted me as his new “mother”. He would curl up in my lap and start purring and sucking the hair on his tummy. It’s was like his pacifier and was so cute to hear his little sucking noises. He did this for months but finally outgrew this endearing habit. 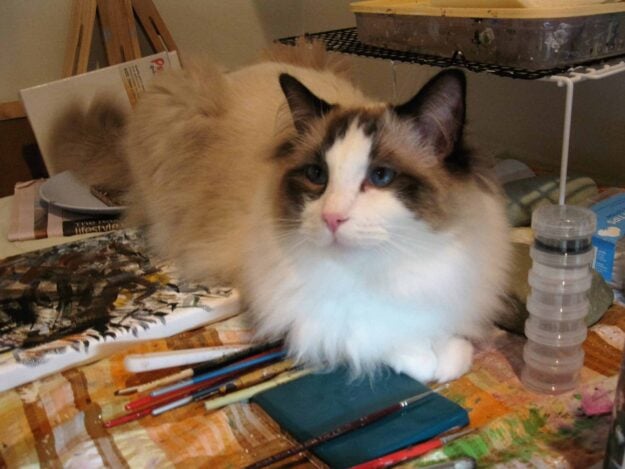 He is absolutely everything that a Ragdoll should be. He is a real “floppy cat” and goes limp when we pick him up. He is now so heavy we have to support his back. He flops over on the floor from sitting to flopping, especially when we want to pick him up. My husband loves holding him like a baby because he stays absolutely still. He is loving, gentle, intelligent and follows me absolutely everywhere I go inside the house. (And I mean everywhere.) He is always with me in my studio as I paint and likes to lay on the table and watch. At the moment, he is behind my laptop keeping me company. He always comes when he’s called, usually to “Puppy Cat”. He outgrew sitting on my lap but is constantly with me. He can’t stand to have a door closed between us. He will bang the door until he is allowed in with me. His breeder did a wonderful job of socialising him because he loves people and has to be the centre of attention. He greets visitors at the door and enjoys sniffing their shoes just like a dog. He then explores any handbags that are left in his reach. He gets along with visitors’ dogs (If they want to get along with him. Otherwise, they are banned from the house.) 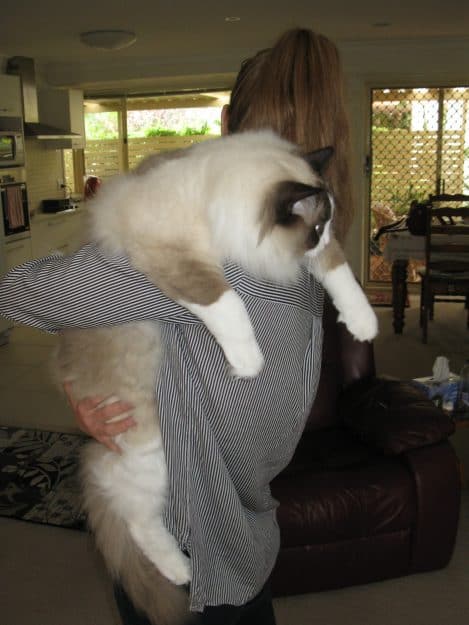 He is so quiet and gentle during the day, but he has his “crazy cat” moment before we go to bed when he races around the house and wants to “rough-house” with me. I just have to give him the word and off he goes! He never uses his claws and we have a great time of bonding in our play. He has time out to have a tummy rub. He doesn’t mind brushing but lets me know when he’s had enough, but hates having his nails cut. We have an understanding about this though, and I usually win. It is the only time he growls. He loves helping to make the bed, so we can’t be in a hurry because he dives under the covers and waits until we “find him”. It is another one of his endearing games. 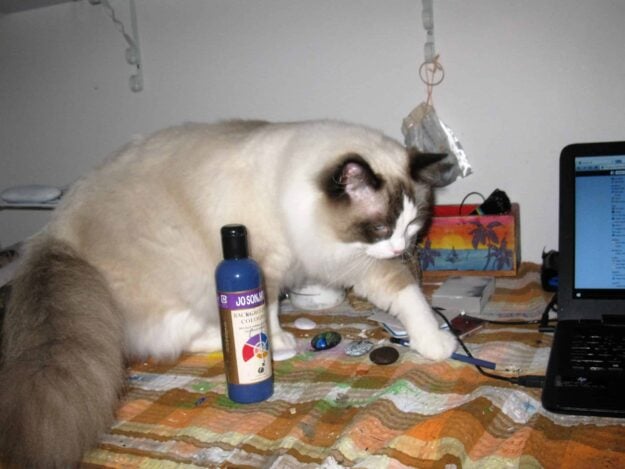 We’ve bought him a variety of toys including a scratching platform which he loves and still manages to sleep on it even though he hangs over it a bit. The one toy he plays with over and over is a small plastic medicine cup that costs about 10 cents. He carries it everywhere,and bats it like a ball. We have to keep a supply because he loves shoving them under the bed or sofa. He makes up his own games with it which make my husband and I laugh. Oh yes, my husband absolutely adores him now. He keeps saying he never thought he’d feel that way about a cat, but Jaspurr has well and truly stolen his heart because he is so gentle. I actually call him “Puppy-cat” all the time and as far as Jaspurr knows, that is his name! He has filled the empty part of my heart that Toby left. In our minds, he is absolutely the best! 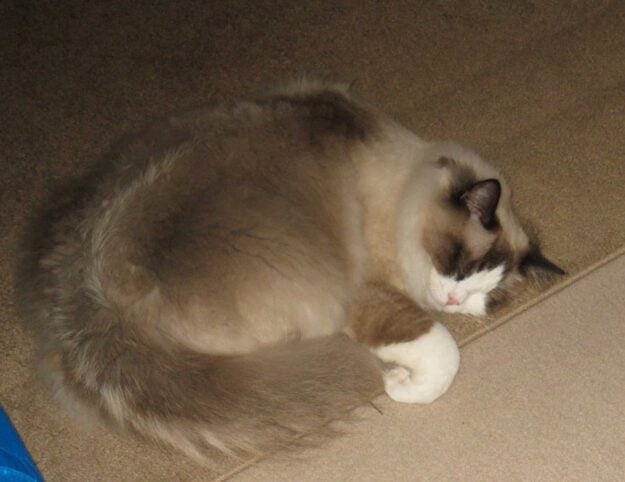