I have never owned a cat but I am a lover of all things cute and fuzzy. It had been years since our then family pet, Petey (a German Shepherd) passed and I was now living alone after moving out of my childhood home. I decided that a cat would be best for my lifestyle.

I did a lot of research. I was serious about finding the right breed for me and was looking for a cat with “dog-like traits” and felt that a Ragdoll would be the perfect fit. The search was on! My co-workers even threw me a Kitty-Shower (instead of a baby shower) and decorated my desk. 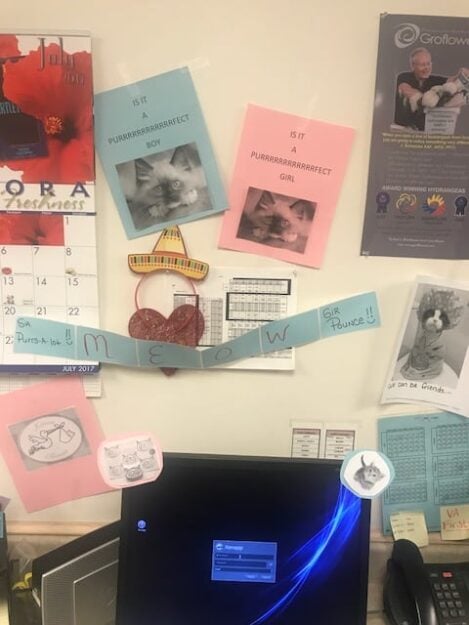 After much searching just weeks before my birthday, I saw a post from a local breeder, Briadolls Ragdolls, with a picture of this handsome little guy. Below is a pic I took during his first few days of being home. 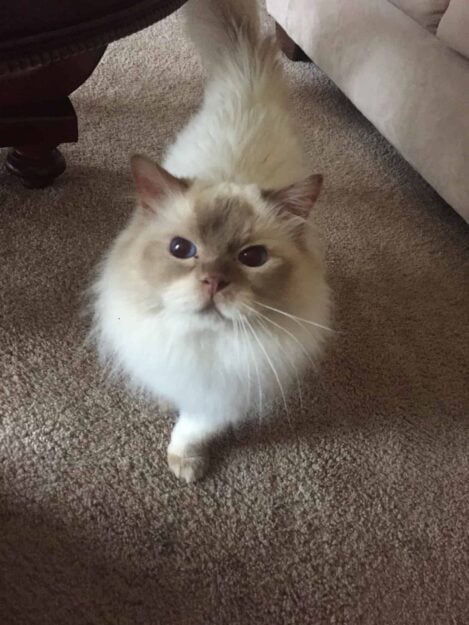 They posted that his name was Honey Bear, born May 5, 2011, a cinnamon point male in need of a good home where he could be the only kitty and that he would likely be very shy at first but would warm up to the right person. Well, seeing that my birthday is May 15, I knew we were meant to be right from the start. I contacted the breeder to see if anyone had stepped forward to claim him and she and I exchanged lengthy messages about what I was looking for and why I was interested. Then I got to set up my appointment to meet Honey Bear. I referred to it as my Kitter-view.

When I arrived at the breeder’s home Honey Bear (now referred to as Bear-Bear and sometimes Baby Bear) was sitting at the top of the steps looking on. We all had a seat on the couch and had a chat for about an hour. I noticed right away that he was a shy guy and not at all like the other cats she had in her home. I assumed that she’d had him since he was a kitten and that’s when she told me his story.

Honey Bear originated from another breeder in another state who unloaded all of her cats. Briadolls Ragdolls took half and another breeder took half. She told me that when he came to them he couldn’t even be touched and he didn’t seem to easily trust. He would flinch when they tried to touch him and said it was clear that he was not well socialized in his previous environment which went against everything I’d learned about the breed.

She continued to say that her family had Honey Bear for two years and that while he had much improved, after great consideration decided it would be best for him to be a pet and not used for breeding in a home where he could be the only cat and receive as much attention as anyone could give him.

I wanted to cry! How could I not take this guy? I went home and made quick work of setting things up for him before he came home in 2 weeks. The breeder was fantastic in answering any questions I had and appreciated that I was so set on making him feel welcome and spoiled.

They said he would be shy so I took off for a few days from work to give him some serious attention. He was shy the day I met him and he hid for the first 12 hours when I brought him home but he’s been with me just under a month and shy no more! 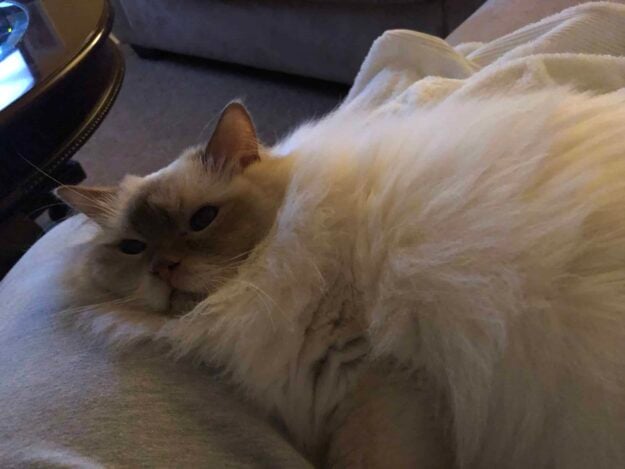 He slept under the bed for a week but he is now content to sleep in the open or come lay his head on my lap when I get home from work in the wee hours of the morning. He’s playful and curious. He loves to “hide” behind these short cardboard cylinders that I brought home for him. He uses them to stalk his prey and runs through them with the greatest of ease. His prey could be this purple ball or his springs or his little mice that rattle when he bats them across the floor. 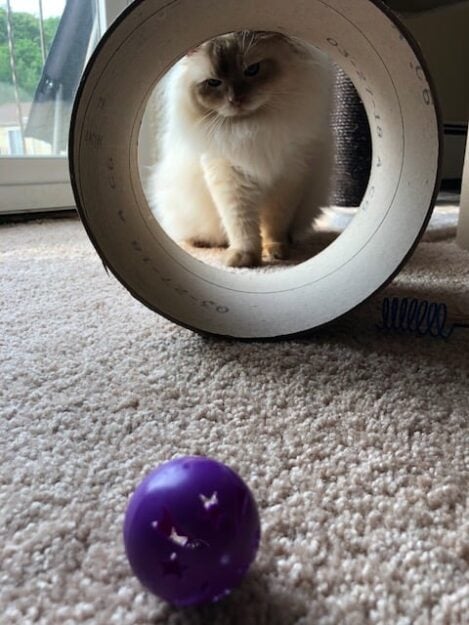 He recently received a gift in the mail from his Furry Catmother, custom crochet catnip toys from a shop. He absolutely loved opening the package and you can find him with one of them from time to time. Here he is with his apple. I think he likes it the most because it rolls so well. 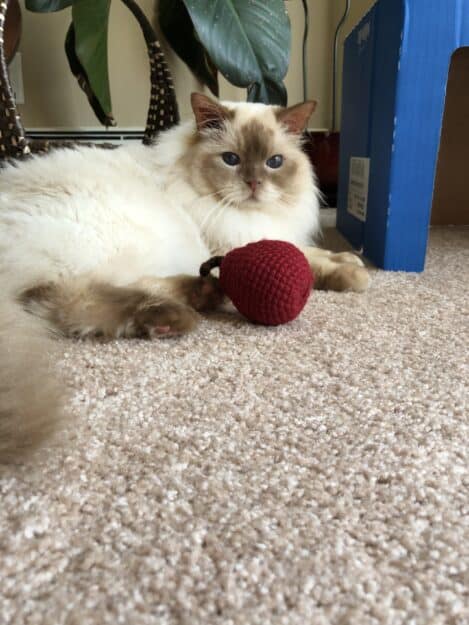 Bear Bear absolutely loves meal time and now that he is used to the schedule and routine he looks forward to it. He gets wet food twice a day and after rejecting several brands, he loves “Instinct by Nature’s Variety”. It’s a limited ingredient brand and so far he has loved everything except the salmon. If he hears the can open or if he hears the ceramic dishes “clink” he comes running. 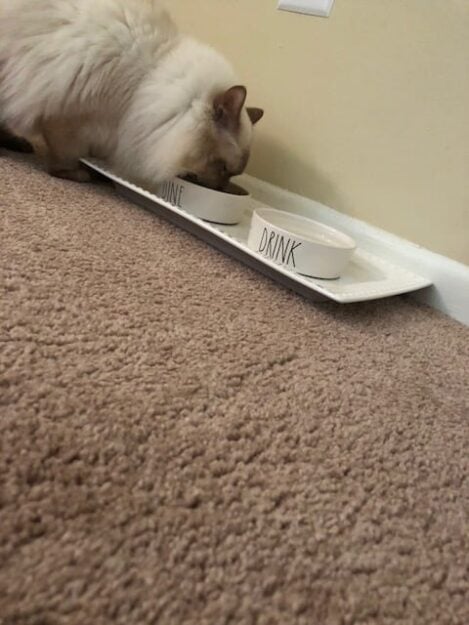 And of course the only thing better than catnip or food is a good massage or a brushing. He LOVES to be brushed and, oddly enough, to have his belly rubbed. in fact, he can be quite possessive of his brush. He pretty much told me, “I can brush myself, thank you very much!”. 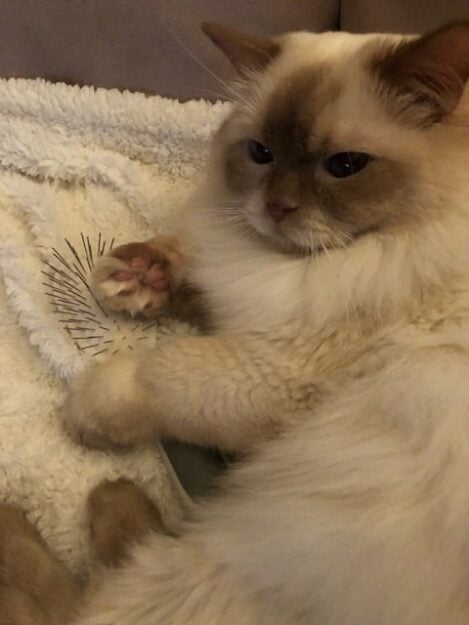 I love this little guy. He follows me everywhere. He waits for me outside of the bathroom door. He comes to the door when I come home from work in the morning. And after litter scooping and (his breakfast), we have coffee and bird watching sessions.

You would never know that he was previously an under-socialized little guy who needed lots of love to bring his naturally sweet demeanor back to life. Between the family at Briadolls Ragdolls and his new home with me he is coming along very well. I’m really so glad to have him and I hope that you’ve enjoyed learning about him.

Most humbly submitted: Danielle and Bear Bear. He also has an IG account: @liberace_cat