I’m Emilee, a 23 year old from Illinois, and this is the story of my beloved Holly. 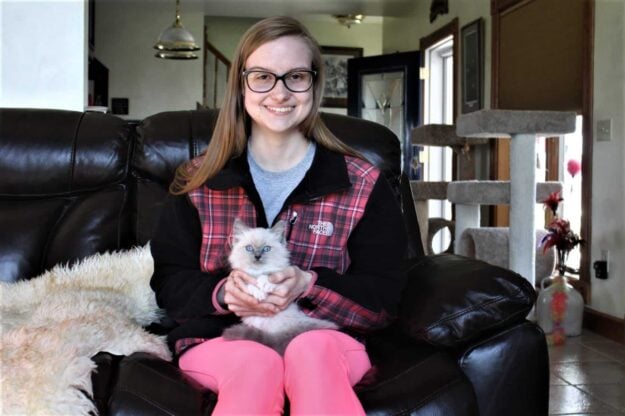 After losing my childhood Ragdoll Tribble, my home felt empty. There were so many times where my cat should have been, but wasn’t any longer. I knew I wanted another Ragdoll due to the mellow and tolerant nature of them, but I did not know where to find one as we had gotten lucky getting Tribble from a rescue. 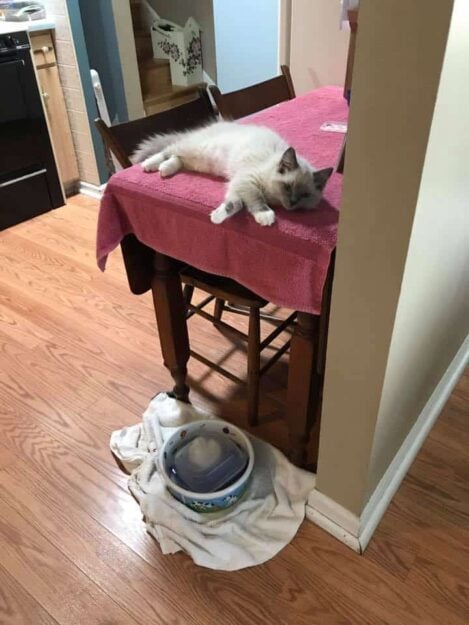 I went to a couple shelters, but there wasn’t a cat that I really felt a strong connection with. My family started pushing me to look into breeders instead of a rescue since I was looking for a Ragdoll only. I discovered a breeder called SpringVale Dolls in Brandon, Wisconsin. There were no available kittens at the time, and I was beginning to think that finding a new cat would take a long time. My family then showed me the SpringVale Dolls website, and a kitten named Holly that had previously been taken was available then. My mother called Cindy at SpringVale Dolls and we learned that someone wanted two kittens but changed their mind and only wanted one, leaving Holly, who was born on February 5th, 2017 to Honor and Blue Jay, available. 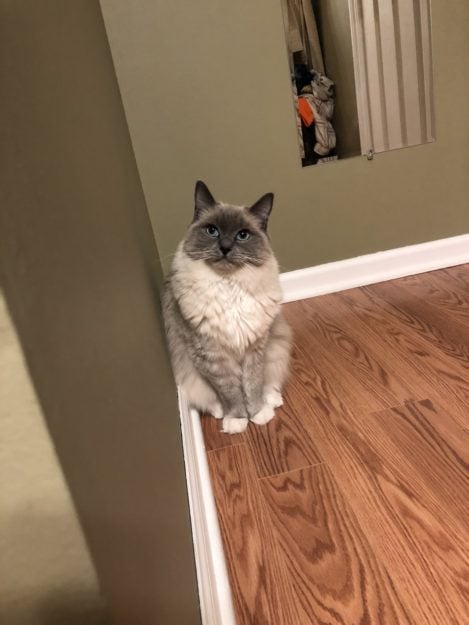 I was very hesitant to commit to the Holly because a kitten is still developing its personality and I needed a cat that was super sweet and cuddly. To ease my mind, we set up a meeting to see Holly in person to make a decision. The day that we met Holly, she instantly melted into my lap like she was a liquid. She kept making eye contact with me and slow blinking at me, and the breeder pointed out that it looked like she trusted me. I played with her a little bit as well, and I knew that she was the one for me. I was able to pick her up on May 5th after she had been spayed. Coincidentally, May 5th was the day after I wrapped up my college semester so we had the whole summer to bond. 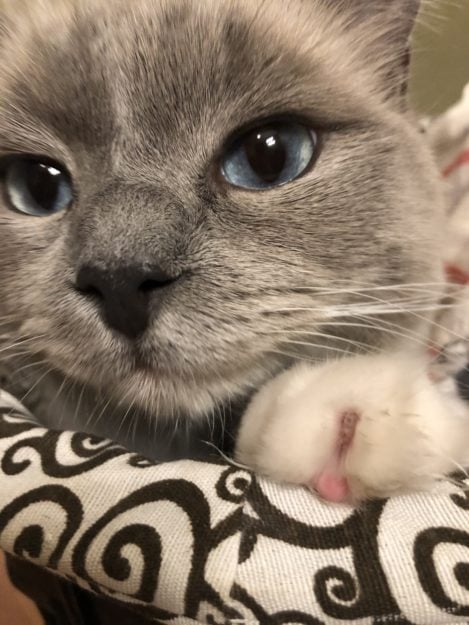 I carried her everywhere with me, and we did everything together. Since then, we have been inseparable. An animal communicator even told me once that she and I are soul sisters, and I believe it. Holly is very mellow and sweet, but she is also a sassy queen with an attitude. She loves to play, and will not stop playing even when she’s on the floor panting. She has a couple go-to toys that make her go crazy. One of her favorites is Boinks, which she plays fetch with. A second favorite of hers is a homemade toy that was actually given to us with our previous Ragdoll–a ping pong ball with a piece of metal inside to clank around. Her number one toy is the Neko flies wand. She loves the FoxiFur head as well as the Kattipede. The Kattipede was actually the toy that we played with at the breeder. Every time she hears me open the bag that I keep the Neko heads, she comes running even if she was previously sleeping. There is no sneakily moving her toys at any time. She loves to make a stink though and be naughty. We foster dogs, and she enjoys sitting just out of reach taunting them. She also loves to get my moms dog in trouble by chasing the dog to get the dog to chase her because she knows that when the dog chases her, the dog is the one to get in trouble. She then sits there with almost a smirk on her face saying “I win.” She also LOVES to complain. Whenever she doesn’t want to do something or to be picked up she gives a closed-mouth meow that sounds just like a child. Despite the attitude, she puts up with everything. I can carry her around the house like a football, dress her up, make her dance, and so much more. She is absolutely fearless, and will even play with plastic bags (which I take away quickly), the vacuum, and she loves to take baths with me. 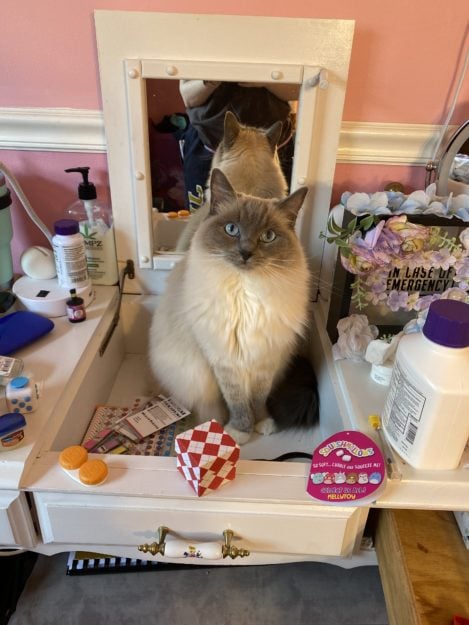 Despite being playful and messing her fur up from playing so hard, she is a princess. 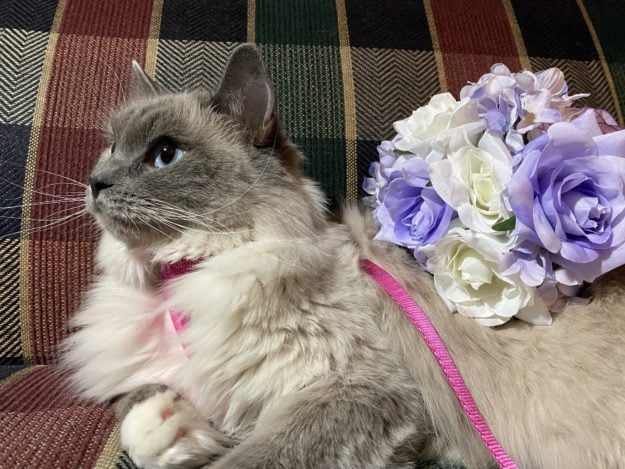 She loves being brushed with her greyhound comb, and even my own human hairbrush. With her being a princess, that means that she will only accept the best of the best. She will only drink filtered water from the fridge (or the leftover water on the shower curtain–yuck). She refuses to eat any typical ‘cat’ treats, and will only eat human food or freeze dried real meat. Her favorite treats are the chicken treats from Fresh is Best, and she likes any of the PureBites freeze dried treats. She also refuses to eat ‘peasant’ paté wet food. I made the mistake of giving her a paté wet food on her birthday and she looked at it, looked at me, and went to the kitchen to wait for her royal wet food. 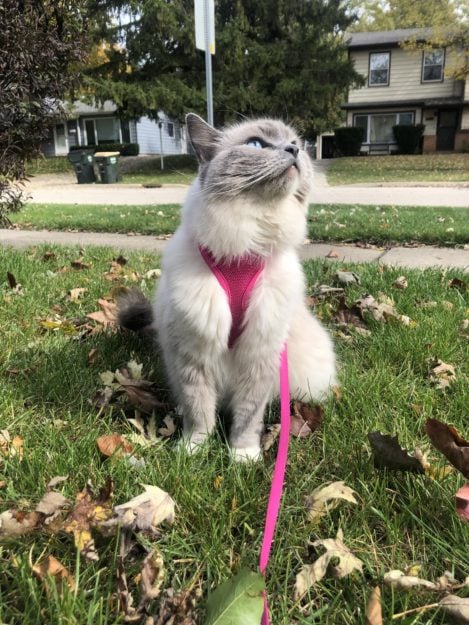 She also loves to wear fashionable collars and has a large collection of them. Some of her favorites are the ones with bows on them to emphasize the fact that she is beautiful. She has recently taken over her guinea pig brother’s Instagram account and can be found @thefuzzyholly. 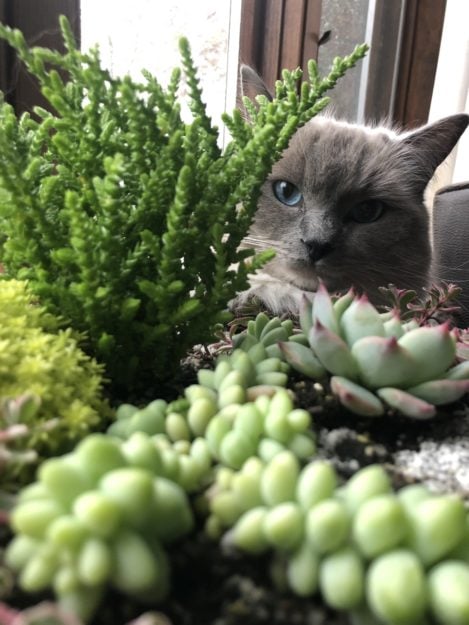 Going through the process of getting Holly from SpringVale Dolls really changed my life. Cindy really cares for her kittens, and ensures that each one is special and will steal a piece of your heart—or your whole heart! Do you have a Ragdoll Kitten or Cat?  Consider submitting your kitty!  Ragdoll of the Week submission guidelines Read more Ragdoll of the Week submissions.