My story of Harry wouldn't be complete if I didn't tell the whole story of how he came into my life. It begins sad, but I promise there's an even happier beginning.I first heard and interacted with a Ragdoll called Peaches when I visited my friend's place in Australia back in 2004. 10 years on and I was looking for a new pet and Ragdolls popped into my mind. I found a breeder, put a deposit and waited 2 months for a baby to be born. In the mean time I joined the local Ragdoll Facebook group, found Floppycats and read about choosing a breeder, and when I asked the breeder some questions, like whether she

tested for HCM/PKD, or more photos with my kitten and her siblings, the breeder bailed, refunded my money and didn't answer a single question, not even how many kittens were in that litter. Devastated, I found another breeder with a show standard chocolate pointed girl available in a month. Excited, I paid a small fortune, and she arrived a while later. I loved her so much, my first kitten, but within the first month she started having toilet problems and refused to eat. We thought it was a tummy-ache, but it just got worst, she lost both her appetite and control of her bowels; I had to force feed her for the next 3 months. Many vet visits, blood checks, Xrays and ultrasounds later, they found a sausage mass around the colon area. I opted for surgery as there were high hopes she would recover well. Then she caught pneumonia after the operation, had a seizure but managed to survive that too. She was about to be discharged when the histopathology report came back, it wasn't cancer or intestine intussusception, but suspected FIP. A retest of the tissue mass 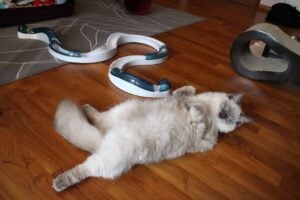 using immunohistochemistry (IHC) confirmed FIP. IHC is the current golden standard for testing FIP. The type of FIP Mille had didn’t show up in blood tests, and no fluid in the abdomen, so only the IHC could confirm FIP. Up to this point I was in contact with Mille's breeder, but upon FIP confirmation, her breeder flipped. Not only didn't offer a compensation or refund, but accused me of defamation and threatened to sue me if I did not put a post on Mille's fb page saying mille arrived healthy. If you know about FIP, you'll also know there's a window period for the coronavirus to mutate to FIP, and as Mille was my first and only cat 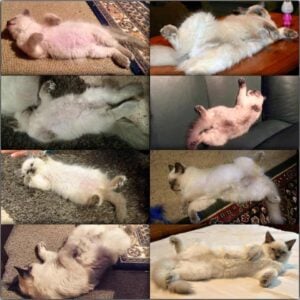 living indoors on level 3 in a new house, there was no way she could have picked up the coronavirus from my place except from the breeder. Sadly, Mille was discharged and came home to live out the rest of her short days. 4 months to the date she arrived, I had to put her to sleep. I was more than $10k poorer, no cat, breeder that threatened to sue me, lots of tears and a broken heart.They say you can only go up when you hit rock bottom, and everything happens for a reason, and that good can come out of the worst situations. A few weeks before Mille's passing, I got a message on fb from a stranger, she had read about Mille's ordeal via Mille's FB page. This lady is Carola, and she's a Ragdoll breeder: Snowdolls Ragdolls. She said she will offer me a new cat when I was ready. I was 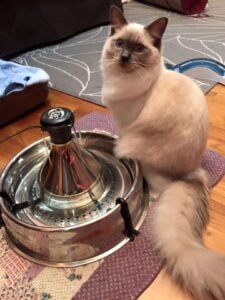 shocked and touched; I had never received such kindness from anyone before, much less someone I didn’t know. Carola sent lots of pictures and videos and she answered every single one of my questions without hesitating! What a change from the other breeders I interacted with, and she even invited me over to visit my kitten! Of course I flew over to Australia! I had an awesome holiday staying with her and playing with all the other cats and animals (kangaroos, wombats, sheep & horses) on the farm!One kitten that I got to play with is young Snowdolls Houdini aka Harry McCool, born on the 25 June 2014. Harry is a very special cat that she was not willing to part with for any amount of money, and lots of people have been asking to catnap him. Everyone who meets him falls in love with him. His nickname is Harry McCool, because he is so laid back and relaxed, and Houdini because he 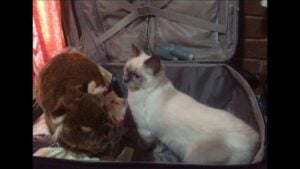 Harry in my suit case

managed to escape from a cage squeezing through the bars! On one of the mornings I was in Australia, Harry climbed into my suitcase; Carola being the angel that she is asked me if I would be happy with Harry. Never in my wildest dreams did I imagine she would give Harry to me! Carola believes this is a good sign and that he is meant to be with me! After 6 months of detoxing my house, Harry arrived together with my now good friend Carola to Singapore!What makes Harry so special? To me, he symbolizes hope, healing, friendship, kindness, love and generosity. To everyone else who meets Harry, they get to interact with a very confident, friendly and floppy cat. He will walk right up to anyone and flop on his back asking for a belly rub. Not scared of strangers and never frazzled by anything, just like his nickname Mr McCool! 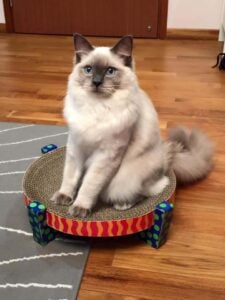 Harry loves his Infinity Scratcher, his Petstages Easy Life Snuggle Scratch and Rest (though it is a bit small), and also his SmartyKat Crackle Chute Collapsible Tunnel Cat Toy. He is not sensitive to catnip though, so his Yeowww rainbow and banana goes untouched, although I do throw it and he chases after it. He loves chasing anything with feathers too, and the SmartyKat Hot Pursuit Concealed Motion Toy keeps him entertained when I am busy. He also loves to drink from his Drinkwell 360 Pet Fountain, Stainless Steel; which I think is better than the Pioneer raindrop fountain because the 360 is larger and good for a bigger size cat like ragdolls. I love his Urban Pet Haus Wave perch as it looks nice on my wall and he uses it to get up to my loft bed to sleep with me. KONG ZoomGroom Cat Grooming Brush is really good for removing more fur when he is shedding but I find it tends to ‘tug’ too much fur out when he 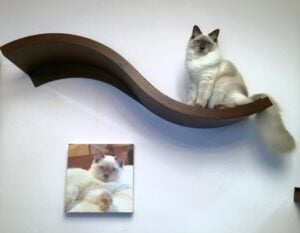 isn’t shedding so I use another comb when he isn’t shedding. Harry loves to chase SmartyKat Skitter Critters Cat Toy Catnip Mice 3 Pack and Petstages Tons of Tails Cat Toy, though out of all his toys though, I think he loves paper balls the best! As you can tell, I’ve gotten quite a few things from Amazon and it is all thanks to Floppycats' recommendations.Harry is very dog like and will greet me at the door and follow me around everywhere, even to the toilet. If I leave the room, he will get up and follow; and if he is sleeping and can’t find me when he wakes, he will meow until he finds me. Harry isn't a lap cat, but he is always near, usually at 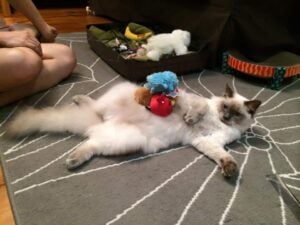 arm length showing off his tummy sleeping, which he is doing at the very moment whilst I'm typing his story. And here is Harry’s fb page if you would like to see more pictures of him.If you are looking for a healthy well socialised kitten, I would highly recommend Carola’s Snowdolls Ragdoll. Her cats are brought up underfeet (never caged) with so much love and care, and only the best food and care goes to all her animals, small or big.In loving memory of my dearest Mille and Alex – two very special Ragdoll kittens who have crossed over the rainbow bridge. Here is mille’s fb page.Do you have a Ragdoll Kitten or Cat?  Consider submitting your kitty!  Ragdoll of the Week submission guidelines 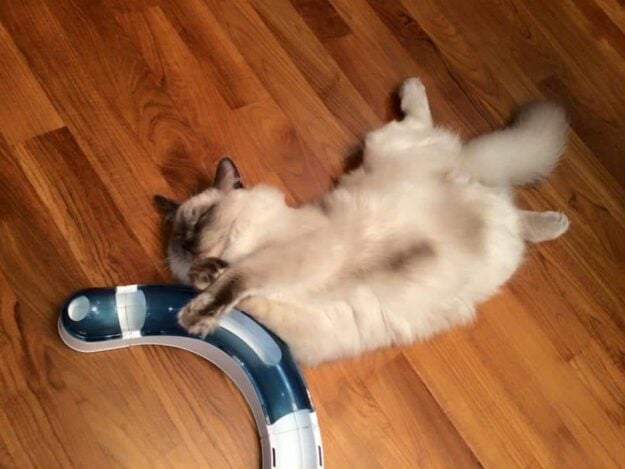