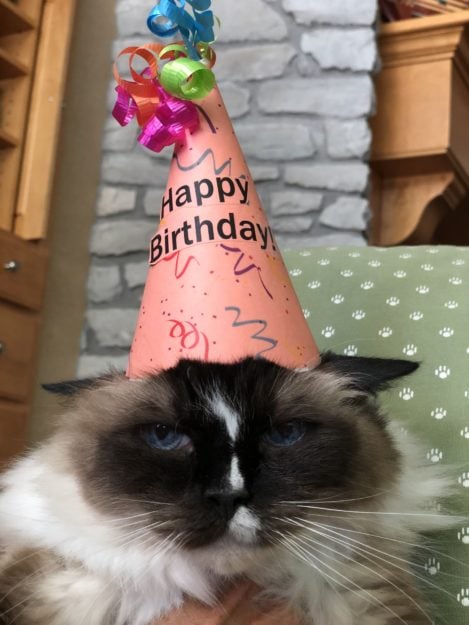 Murphy is a soul cat for my mom - they are bonded.

Murphy is what I would call a "blaze cat"". Our family has a theory on Ragdolls with blazes - that they are outgoing. I have learned, having this website, that perpetuating stereotypes is not something I want to do. But, that's what I mean, by "blaze cat" - he is outgoing and vocal, much like Charlie.

He and Charlie have a lot of similar personality traits - one is always getting them to talk to me when they are hungry.

I've never been successful getting it on video, but he also plays the peek-a-boo game with me like Charlie does. I hide behind a door or down the stairs behind a wall and peek out to catch their eye. And they both have the same reaction - meow. Charlie will bolt away to get me to chase him, but Beau doesn't always do that. Trigg and Caymus do not get the peek-a-boo game. I love that Charlie and Beau Beau get it.

Beau is the king of the roost. When all 4 cats are at the lake, he is the one that is the top cat. He always wanted to be top cat when Rags was alive, but I didn't allow it. I told him his time would come and it did - and he's lived it for the better part of 9 years now.

Beau is a kitten at heart - he always is up for playing. He and Trigg played at the lake, a lot. He played with Charlie too - but I had to stop that because it could have turned nasty - whether or not they did it at night when I couldn't stop them is a different story.

Murphy is the reason we have Caymus. When Rags was 15, I started looking for a kitten - a seal mitted with a blaze kitten (because the first Ragdoll I ever loved was that color pattern). It wasn't until later that Caymus entered the picture because Murphy and Caymus' breeder thought it would be better to bring two kittens home given Rags' age. You can read more about that in Caymus birthday post.

Beau is a skinny guy - he doesn't like food much and as he ages, he is getting fuzzier about what he will eat. 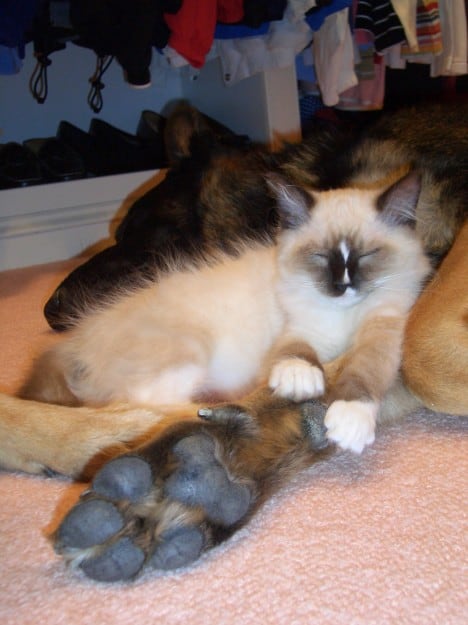 Beau has always been good with dogs. He's on dog number 4, I think. He's never had a problem with any of them. Parker, my parents' current dog, is the only one, though, that I have seen Beau bite - he bites Parker on his nose when Parker is rude (in his face).

Murphy got his name from a billboard. Caymus and Murphy, although born in August 2004, came home to us in November 2004 right before Thanksgiving. We picked them up at the airport (they came from Kentucky) and later that day we drove to my parents' lake house - about 2.5 hour drive. Caymus got his name from the wine company (also explained in Caymus birthday post). I wanted to name Murphy, "Blaze", but my mom didn't like it. We struggled that Thanksgiving trying to find a name for him, and it wasn't until my mom was on her drive home from the lake that she saw the name, "Murphy" on a billboard and said, "that's his name!".

Beau and Caymus both have impressed me immensely with their tolerance of small children (my nieces and nephews). They were not raised with children, but are very kind to them. My cats, not so much.

Beau is a good kitty man.  I have the eye contact with Beau that I had with Rags and that I have with Charlie.  I do not have to open my mouth, and he knows what I want and expects the same from me (for me to know what he wants).  Caymus and Trigg do not make that sort of eye contact.

Beau does not like to be picked up and held.  You can pick him up to help him on the counter, but he doesn't want to stay in your arms - with a few exceptions - my mom holds him and scratches him - he loves that.  I hold him and talk to him - but do it like I do in this video:

He doesn't like to be held like a baby or over your shoulder, etc.  His body's tense-ness reminds me of readers who write in telling me that their Ragdoll is broken because they do not "flop" when they are picked up - Beau definitely doesn't flop when he is picked up - but he will flop on the ground and lay belly up.

He flops in this live video I did:

Beau is usually a hit with guests because he doesn't know a stranger and has made many of the people who have visited my parents' house "aware" of the Ragdoll cat breed - as my mom is often asked if he is a Siamese.

Beau is the reason why I have not stolen Caymus from my parents.  They are a very bonded pair.

I love Beau - he's usually game for just about anything.  He's also pretty demanding like my Charlie.

Happy 14th Birthday, Beau! May we be blessed with many more years together.