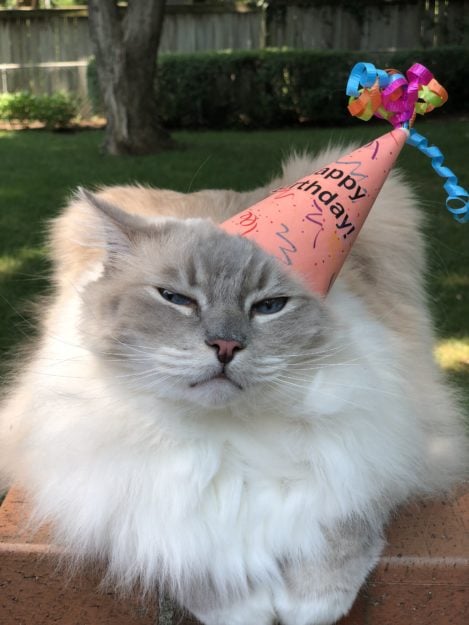 Trigg, who I really call about 10 different names, but most commonly, Chiggy, is such an easy cat. I rarely have worries about him, he eats almost anything I serve him and is always game.  He is usually happy, if I don’t bother him or get too excited about him.  He doesn’t always appreciate my excited energy about how much I love him.

The only challenge I have with him is that he does not like strangers, so he often hides. In fact, many Floppycats readers have asked to come and meet him – but I tell them that the Chiggy you see in the YouTube videos is not the Chiggy you are going to see if you came by. He would not appear for hours and even then, he would be too scared of you.

But when Chiggy trusts you, when he loves you, then you can get this:

When I even mention Trigg to my sister, she lets out a “Cheeeeeeggggg!!!” and that’s the affect he has on people. There is just something about him – his quirkyness, etc.

We just spent about 10 days with my parents, my sister, her fiance and my parents’ pets – 2 Ragdolls and a German Shepherd – at my parents’ lake house. Chiggy adores my mom. He usually hides the entire time we are at lake – but this time, since he has been there more frequently this year, he came out more and always came out when my mom was there. He really loves my mom. She is very enamored with his looks – but that’s not what makes him love her. I don’t know what it is exactly – other than he spent two weeks with her when he was a kitten, maybe that’s when he fell in love and trust with her. With the exception of an old boyfriend, I have not seen him trust and love someone other than me like that.  Since my mom usually has her dog at night time, he does not do his snuggle thing with her.  He has done it with my sister, though, when she stays at my house.  So he loves her too.

Trigg is a goof ball. He is the quirkiest cat I have ever known. He will slide off a couch to get off of it – or slide off my bed. He will also do these head twirls randomly when he gets up.  No cat I have known makes me smile and laugh like Trigg.

He has the best meow – it is a like a mouse squeak and if I refrain from immediately giving him his food in the morning, I always get a good set of mouse squeaks.  And if I really take my time getting his food ready – and if it is a wet food pouch and I shake it, he will rub back and forth on my legs until I deliver the goods.

Speaking of rubbing, he loves to rub against walls, corners, door jams, chair legs, etc. to show you how fancy and beautiful he is.

Chiggy loves sweets. I try not to give him too much – but an ex-boyfriend allowed his cat to lick his ice cream bowl and more and she lived to something like 22 years, so I am not that concerned. He will lick my ice cream bowl or will lick icing off of cake.

If I stay home at night, as I am preparing my meal (when he knows I am home for the evening), he has the crazies in the living room – he runs from couch to the chair, back to the couch – I believe he’s excited I am going to be home for the night.  He doesn’t always do it – but more when I have been gone for a few nights.  Since I work from home, my cats aren’t as used to me being gone as someone who would work outside of their home. 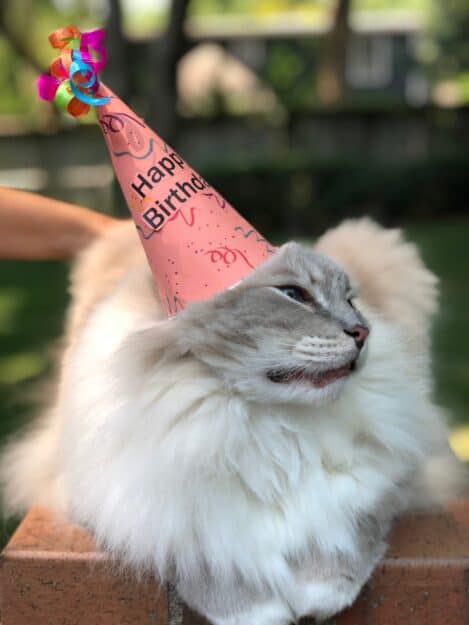 As many of you know, Trigg is related to my Rags, and that’s why I have him.  If you read Charlie’s 9th Birthday, then you know that when my Rags was dying, I had already begun my search for my next cats.  And my goal was to have one of them related to Rags.  Trigg’s mother had Rags’ father, Ragnarok’s Thor, in her lineage.  So, I watched that breeder’s website, waiting to see when she would have kittens. I don’t like to put down deposits, because I usually want to see the cat to see if it’s eyes speak to my soul.  It wouldn’t have mattered in this situation because I had no preference other than a male related to Rags.  But my other cat, I wanted to be a seal mitted with a blaze (Charlie).  So when I spotted Charlie on Soulmate Ragdolls’ website, I knew he was mine.  I then asked if any of her breeding cats related to Rags had male kittens that weren’t spoken for.  Trigg’s mother had two males – a blue lynx colorpoint and a blue lynx mitted.  Lora Tesh, the breeder, said there was a deposit on one of those males – but that the buyer had not yet chosen which one she wanted.  I told Lora I would take the one that lady didn’t choose – so that’s how I got Trigg.  And I love his mitts – Rags had mitts and perfect ones like Trigg does in the front, so I was really pleased with how it worked out.

Our family, too, has never had a lynx Ragdoll.  We have had blues, although rare, but not a lynx. 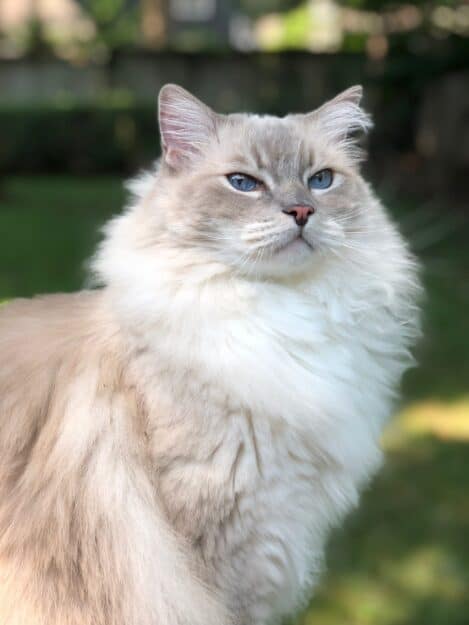 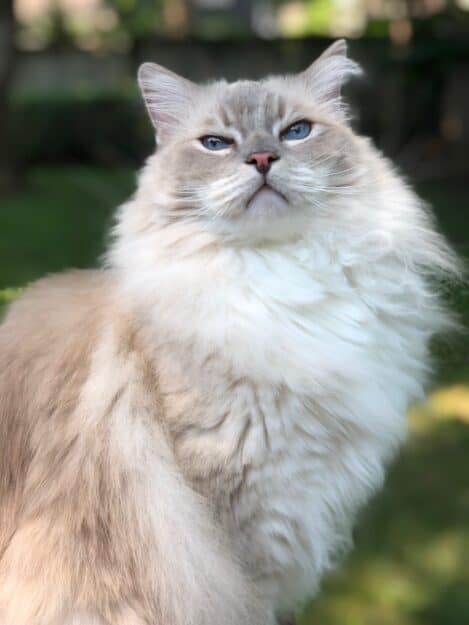 Trigg has been a joy to learn and grow with for the past 9 years.  He has taught me a lot about cats – he is a true cat – Charlie is more like a dog.  I feel honored and blessed to have Chiggy in my life and tell both my cats every day, “How did I get so lucky?”

Happy 9th Birthday, Chiggy Doo!  I hope to have many, many more with you!