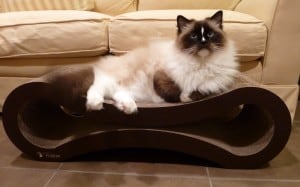 The PetFusion Cat Scratcher Lounge - Deluxe is an awesome cardboard scratcher that I have been wanting to review for some time. It is both a lounge and a scratcher in one. You can flip it over to get twice the use out of it. It has a figure 8 or infinity sign shape and is made of eco-friendly, recycled corrugated cardboard.

Charlie and Trigg love the curves and seem to want to settle right down into the curves after they scratch on it. When I greet Charlie in the morning, this is his first choice to scratch on. He sits in the center and scratches on the two higher points, which you can see in him doing in both the arrival video as well as the final review video below.

It has a large surface area. PetFusion Cat Scratcher Lounge - Deluxe measures 34 x 10.5 x 10.5 inches and weighs 7.5 lbs. the larger surface area works out great because it's ideal for larger breed kitties like Ragdolls. The corrugated cardboard used is tightly woven together, making it a higher quality cardboard that will last longer.

Also, a fun fact about the PetFusion Cat Scratcher is that it was featured on Animal Planet's 'My Cat From Hell'.

The PetFusion Cat Scratcher Lounge - Deluxe comes in two colors - red and white.  However, those color names are really deceiving - they are more like walnut brown and gray - as you can see in the photo below. We received the PetFusion Cat Scratcher Lounge - Deluxe with other PetFusion cardboard cat scratchers.  You can check them out in our arrival video here:

Here is our final review video that talks more about this fun cardboard cat scratcher: 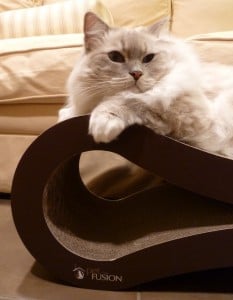 You can visit PetFusion’s website to learn more about their products (they make other products – other than scratchers).  All of their products are sold on Chewy: PetFusion on Chewy.  PetFusion also has a Facebook page.

We asked PetFusion to make a donation to the non-for-profit organization, Kitty City NM, in exchange for the review of their cardboard cat scratchers. We received the PetFusion scratchers for review from the manufacturer. Receiving the free product and PetFusion’s donation to Kitty City NM did not influence this post.