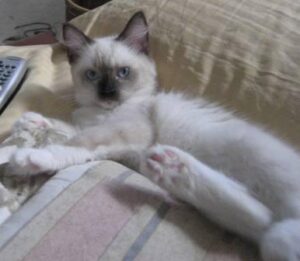 The breeder’s floor was full of beautiful ragdoll kittens and all I had to do was choose one, but which one? These lively little kittens were virtually identical, ranging from 3 to 4 months old, how was I going to choose? A late comer to the gaggle was a little female mitted seal point. She ran right in to the group of older and somewhat bigger kittens, reared up on her back feet and playfully pounced on one of the bigger kittens, taking him completely by surprise. I went in knowing I was going to need a special kitten with a little moxie as I had three stodgy adult cats at home that were stuck in their routines and this little girl’s energy seemed to be just what we needed. 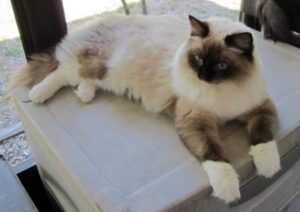 It was a three hour drive home and my new little kitten took the trip like a trooper. My other cats meow constantly while they are in the car, this kitten just sat in her travel kennel, listening to me talk to her and touch her little paws through the grate. When we made it home I brought her in through the front door safe inside her travel kennel and when my resident cats saw what I had brought home they all ran out on to the porch in a silent protest. Seeing we had the inside of the house all to ourselves I opened the door of her box and let my new baby venture about and she

immediately began exploring her new world. She wasn’t in the least intimidated by the strange spaces or strange smells and she quickly spotted and investigated the long unused box of toys!

That first night my grown cats refused to come in off the porch until it was dinner time. Our beautiful little kitten was hissed at, scowled at and my oldest female even made some half-hearted bops but everyone quickly settled down and had their dinner. In fact, it wasn’t too long before our newbie was sticking her little nose into the other cat’s bowls to check out what they were eating! It was quite a shocker to see my 12 year old Maine Coon cat step back 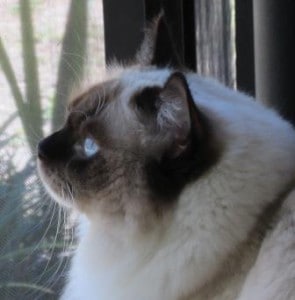 and surrender her dinner this brassy, 3 month old kitten she had just been trying to bop! My big girl didn’t know what to do! No one had ever dared to interfere with her meals before.

My ragdoll kitten stuck close to me that first night, and every night thereafter, while the resident cats gave her a wide berth which was just fine by us because we were both sleepy! However, that next morning this little kitten, that was hardly bigger than a cable TV remote control, was running around, leaping and pouncing on these much bigger cats as if she had grown up with them. They in turn tossed her some over the shoulder hisses and the black one began making emergency escape moves when he could see a bouncy, kitty attack coming his way. Every now and then it seemed as if my adult cats would look up at me as if to ask “How long is this going to go on?” And I would say “you’d better get used to it.”

Eight months later and our house has gone through such a wonderful transformation. My three older, resident cats, who were content to sleep away their golden years, are now playing thundering herd of elephants with our kitten, now named Angel Mae! There’s still some pouncing going on but that has taken a back seat to the much preferred game of stealth ambushing and there are the mad dashes to nowhere that seem to be made just for the joy of running. Then, when they’re all tuckered out, they settle in for a nap in the window seat. Life is good with a Ragdoll cat.