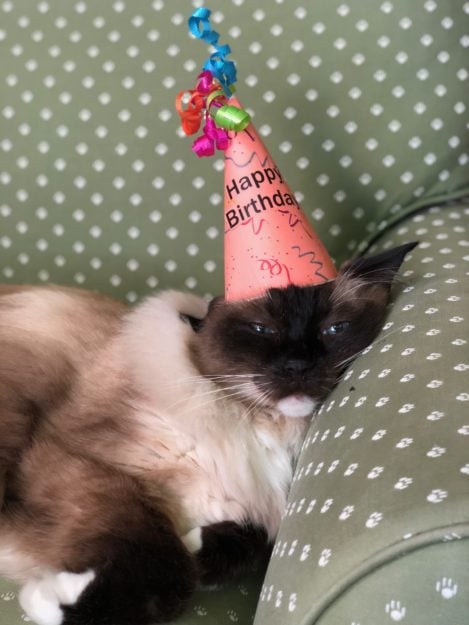 I cannot believe he is 14. Please make time stop. I will be devastated when this one goes.

One kitten was in IL and the other in KY. The breeder in KY was more responsive and suggested that we get two kittens because of Rags' age - saying that they would more than likely play with one another and leave Rags alone.

So I asked the breeder in KY if we could adopt her kitten and told her about the one in IL. She said she would not adopt her kitten to us if we were adopting the one from IL too. I asked her why, and she said that she could not guarantee her kitten's health knowing it was going to be put with a kitten from another cattery. So after getting my mom to agree to adopt one kitten, I then had to talk her into another kitten. She was fine adopting another one from KY, but wanted it to be a seal mitted. Seal mitted is my mom's favorite Ragdoll color pattern - or perhaps I should say that it WAS. My mom is smitten with Trigg's looks now, so I am not sure seal mitted is still her favorite.

So it was because of Murphy (the seal mitted with a blaze) that Caymus became ours. I am so glad he did.

Caymus and Murphy’s breeder always said Caymus would be good to Rags and that Murphy would challenge him. She was right. Caymus always respected Rags. Caymus and Murphy are my last living connection to Rags too because they knew him. My siblings, parents and other family members did too, but it’s just different animal wise.

Caymus was named after a bottle of wine. My mom was trying to ease my dad into having 3 cats. My Dad loved Caymus wine, so she thought it was a good name. It is one of my favorite cat names to date. My dad doesn’t call him, “Caymus”, though. He calls him, “The Big Guy” or “Fatty”.

Caymus has always liked food and when he had free feed dry food for the first 6 months of his life, he was obese. So the fatty thing has stuck with him, even though the vet loves his weight now.  He is 17 lbs and the biggest boned Ragdoll cat in our extended family of 11 Ragdoll cats.

I adore Caymus. Many of you know that. There is something about him that melts my heart and makes me crave him. He is a soul cat for me. I just adore him. I love how he walks, how he carries himself, how he acts when he’s excited, how magnificent his coat is. He’s such a weirdo at times, but yet he’s Caymus

Caymus has really opened up and become more brave. He hated dogs when he first arrived at my parents house in November 2004. And when my parents got a puppy in 2006, he started peeing in the shower from the stress of it all. Several years later, he’d be slapping that grown dog when she wouldn’t smell his butt.

Everyone in my family knows I’m obsessed with Caymus. The first thing I do when I go to my parents' house is find him, if he hasn’t come out to say hello. And I hold him for lengthy periods of time, whilst my dad saying, “Jenny, put that poor cat down.” 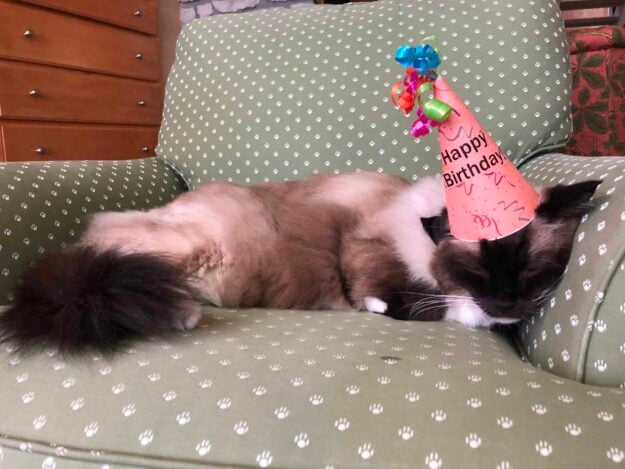 Caymus is a true Ragdoll. He’s big, big boned and floppy. You have to use two hands to pick him up. Otherwise, you’ll drop him - he goes limp upon pick up. He also will stay in your arms for as long as you want.  When his blood is taken at the vet, he just sits there while the poke him and draw the blood, as if nothing is happening.  He is a dream cat at the vet, really.  He's a dream cat, period.

I lived with Caymus and Murphy for a few years at my parents' house before I finally convinced my mom to let me take Rags with me, so, as a result, I feel pretty bonded with them.

Every Christmas and every birthday, I ask my mom for one gift - Caymus.  My mom always says no.  He is a real joy when he is not with any other cats or dogs.  He is a joy when he is, but when he is by himself he is very affectionate, confident and just more awesome than he already is.

I hope to have Caymus in my life for many more years - even if I will never live with him on a permanent basis again.

Happy Birthday to my beautiful Newy.