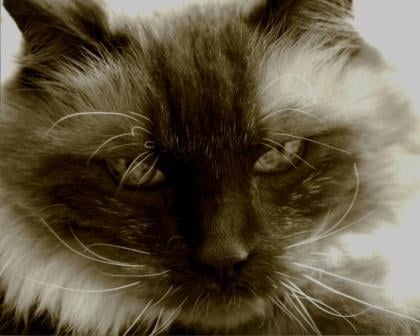 Many feline fanciers are attracted to the floppy cat or Ragdoll cat for very good reasons. Ragdolls or floppycats are one of the most popular breeds due to their large size and gentle dispositions.

The Ragdoll breed has been around since the 1960s and was created by the selective breeding of Persian/ and Angora and Burmese like cats. All Ragdolls are descended from the queen, Josephine, who was owned by breeder, Ann Baker’s neighbor.

One of the most attractive things about the Ragdoll or floppy cat is their size and structure. These cats have a large frame and a well proportioned body. Female Ragdolls can weigh between 8-15lbs while males can weigh between 12-20lbs.

Along with their size, Ragdolls are known for their tendency to go limp when picked up. This has to do with the Persian and Burmese traits that Ragdolls have but it hasn’t stopped people from speculating on what causes it. There is rumor that the Ragdolls go limp because they were descended from the litter of kittens Josephine had after she had been involved in an automobile accident. The accident caused the limpness and/or made the Ragdoll or floppy cat immune to pain. There have been some breeders that have tried to breed out this trait, for the cats own good, but it is still prominent in the breed.

Besides their size and disposition, Ragdolls are also very beautiful in color. They are known for their gorgeous blue eyes and fur coloration. Ragdolls come in six different colors and four different patterns. The colors are flame, chocolate, seal, blue, lilac , and cream. Those colors are shown in the four patterns, bicolor, pointed, van and mitted.

2 thoughts on “What is a Floppy Cat?”