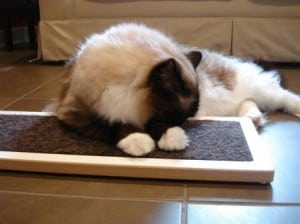 Why Does My Cat Rub Up Against Me? My Shoes? Nearly Everything?

Pheromones are incredibly important to cats. Their bodies have multiple glands that secrete them -- on the lips, forehead, flanks, front and back paws, etc. Producing pheromones is one way in which cats mark their territory, as well as how they signal familiarity. When a cat is rubbing up against you, he is leaving a non-offensive scent on you that he finds comforting. Pheromones are used to convey information to different cats, frequently about reproductive status.

Scent has a significant effect on cats. Even for humans, it is one of the strongest senses for reproducing memories. In this way, a familiar smell can calm a cat's nerves. Since cats are so sensitive to it, they take great joy in rubbing up against you and taking in your comforting scent. Plus, just like humans, they love to snuggle up with someone else.

Everyone has a unique smell to them. Cats are able to pick up on this more easily. They mark their human masters as their own by leaving their unique pheromones on them. Essentially, they claim their owners in the same way we do them: we pledge to do our best to take care of them, tend to their needs, and often times go beyond that, showering them in cat toys.

Cats also tend to rub up against their owners as a form of affection or to get their attention. Maybe she wants you to pet her behind the ears or let her outside. She'll be sure to let you know. Cats engage in an act called "bunting," which is when they headbutt you or other cats. It is the feline equivalent of a hug as far as we can tell and pretty darn adorable when it happens.

Have you noticed your cat rubbing on things and marking it with pheromones - please share your experiences in the comments' section!