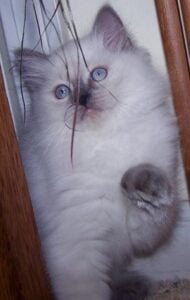 This is Baxter, AKA, "THE PRINCE", Baxter-noodle-Doo, Baxxi-Mundo. Baxter is a Blue Point Ragdoll, 3 1/2 years old. He was my first cat as an adult because I was always severely allergic, but somewhere in my 40's that changed. I am still slightly allergic to him, but not as bad as most cats.

Baxter was the most adorable 9 week old boy. At the time, I hoped he and my Great Dane would be friends. I totally underestimated that relationship because it became an obsessive love story! Some of these pictures were taken the first weeks he was home. I thought he was a perfect kitten, and took hundreds of photos of him.  My Vet warned me when he was 6-7months old that he was likely to want to remain an only cat, but I badly wanted another, in fact, I wanted a 3 kitty family. 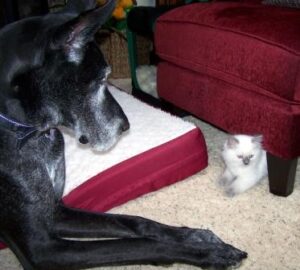 Over the next year, I got two other cats, a Siberian, and another Ragdoll, all about 6 months apart in age. Violet, the only girl, was a previous Ragdoll of the Week. Baxter was never mean to the others, but decided quickly, I no longer held any ranking in his "loves" folder, and neither did the other kitties. Only Grace, the Dane, held that honor and still does. When Grace goes outdoors, he cries and scratches at the door until she comes back. He licks her ears and he kneads on anything she's sleeping on. 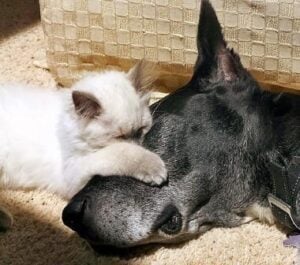 When Baxter was just turning 2, he got sick. He vomited a few times, and then stopped eating. Of course it was on a weekend, so he had to go an emergency clinic. They X-rayed him, and thought it looked like he'd swallowed a wire of some sort. Odd, because he was not an inappropriate eater. I was very scared.

They said take him home, if it doesn't pass, come back. The following day, there was no change, so they had to do a full exploratory surgery. When they opened him up, the Dr. found something he'd only seen one other time in 20 years. Baxter had vines of tissue growing out of his abdominal wall that were strangling his intestines! When they cut them all away, his intestines pinked right up, and they closed him up. 12 more hours and he'd have died! 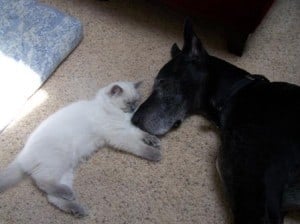 Don't EVER hesitate when your cat stops eating or vomits more than once!I am so very thankful I didn't lose him, and he's been fine ever since. Baxter believes the world revolves around him, he treats me as his slave, and feels sometimes I was born to annoy him. If he doesn't like the flavor of Fancy Feast you offer (that's all he'll eat, and what he likes one day, he won't eat later.) First he meows, then he'll start pushing things off the counter, one thing at a time.The louder the crack on the floor, the happier he is. I often ignore this just 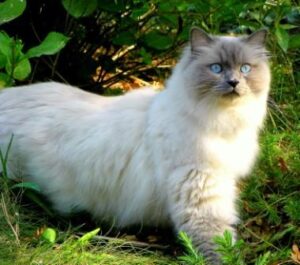 to see how far he'll go. Next, he'll open the drawers in the kitchen, and begin tossing silverware, knives, can openers, chop sticks, scissors, all onto the tile below. Then he opens the doors to the pots and pans and pulls them out. He waits a few minutes between each crash. it's hysterical! He's such a brat! Sometimes he even tries to push a full ceramic water bowl off the counter! He's very smart and pre-meditates a lot, which endears him to me even more. I just adore Baxter because of his obstinate nature.  He's not typical of a Ragdoll, he doesn't like to be held, and never call him "floppy'! He's tall, long, and very lean, with a soft beautiful bunny like coat and very thick tail. I also have 3 large Parrots, and he likes to go into their room and strut around. Baxter thinks he's a Prince, but around here, he's the King! 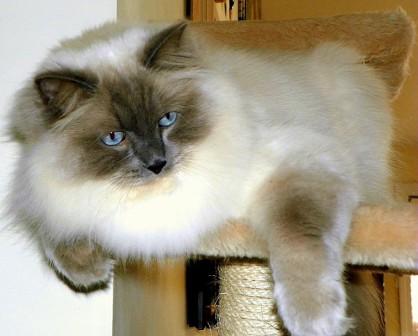 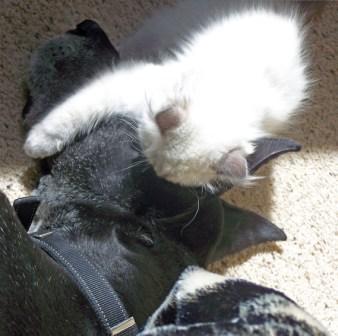 Baxx at 13 weeks playing with Grace 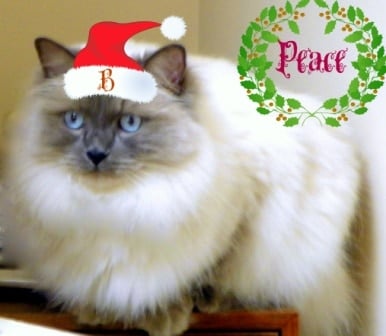