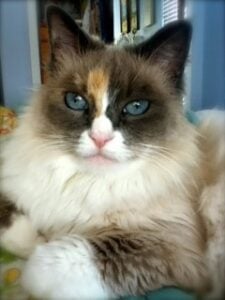 Emily’s Story- From the Big City to the Burbs!

I adopted Emily in March 2012.  My 20-year old Calico, Chloe, had been lost to long bout with CRF and I had been doing twice a day sub-q fluids for over 2 years.  I was ready for a break from nursing and wanted to just enjoy being a cat-owner again.

I first heard about Ragdolls when watching an episode of Cats 101.  They were so cute and the description of their personality traits really appealed to me. 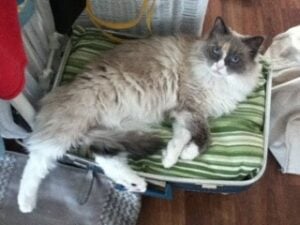 A local purebred rescue organization www.purebredplus.com has some Ragdolls for adoption and I constantly checked their site and filled out an adoption application.  They contacted me a few weeks later with a possible match- Emily was in San Francisco and her owner needed to re-home her due to illness. 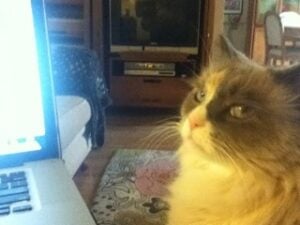 Her pictures were adorable and my sister and I made the trip to the city to meet Emily in person.  She arrived to the meeting place in a taxi! What a city girl!   Emily showed off during our meeting with lots of play and washing her stomach with her back legs spread wide open- so lady-like!

It was love at first sight on my part.  Even though I felt awful taking her from her home and someone who loved her, Emily’s owner was anxious 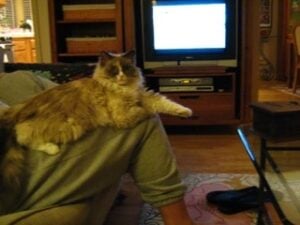 to do the right thing and find her a new home where she could get the care and attention she needed.  So, I brought her home to live in the suburbs.  I often wonder what she thinks of going from living in a small apartment in San Francisco to a house in the suburbs!  Last spring I had a pack of baby foxes living in my backyard and Emily spent many hours gazing at them through the sliding glass door with the foxes watching her right back!  What could be going through her head?  “Where the heck am I?” 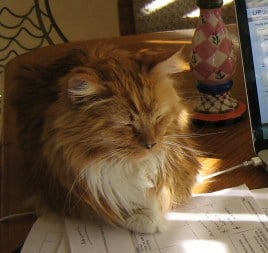 Emily just turned five.  She and my 15 year-old orange tabby, Andy, have an armed truce relationship.  Andy is not thrilled with her energy level and bossiness.  But, it’s really karma, since he spent a lot of his timing bothering Chloe in a similar manner!

Emily loves to play and requires lots of attention.  She will sit on a lap whenever possible, but prefers to just sit on you and not be petted too much.  Too much petting can result in a warning bite.  She always has a paw, or two, stretched out like she’s reaching for you.  Her favorite play location is the stairs and will play endlessly on them with a chaser toy.  She throws herself around with no regard for her own safety and has occasionally given us a scare by hanging off the stairs.

I’m not sure if she’s a purebred Ragdoll, but she sure seems to have the “look”. 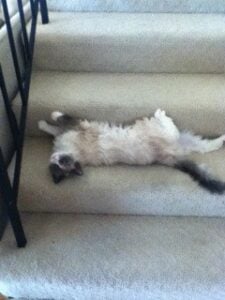 Emily is a constant source of entertainment.  She makes me laugh out loud several times a day with her antics and poses.  I’m not sure who rescued who! 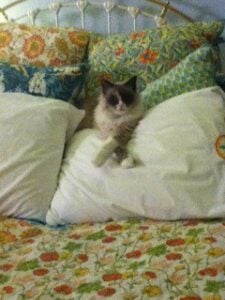