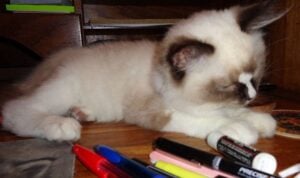 Gatsby - Ragdoll of the Week

I first discovered Ragdoll Cats in 2009 from pictures in my daily cat calendar.  Our previous cat died at the age of 18 years but, because of my husband's allergies, we put off getting another cat.

When my husband died in March, 2014, the house seemed too large and empty,  so I went about finding a Ragdoll breeder.  I found one less than 100 miles from me, Furrreal RagDolls in Ione, California.  Mary Ridell, the breeder,  required  a deposit on one of two litters.  Once she had the deposit she sent me pictures of the first litter and I picked the kitten with the white blaze on his nose. 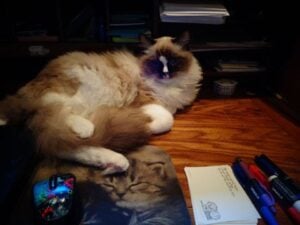 That Saturday before Mother’s day, my daughter and granddaughter and  I loaded a cat carrier into the van and headed to Ione, a 1 1/2 hour drive. Mary had me sign the necessary papers agreeing on things like not having him de-clawed, and not letting him outdoors alone, etc.  The kitten already had his kitten shots and been altered.  It was my granddaughter who suggested the name Gatsby, although a 2 pound 3 ounce kitten hardly deserved the name.

I took Gatsby with me to my daughter's house to celebrate Thanksgiving.  There he was introduced to their Snorkie dog, Gypsy.  After a rough beginning, they had a tenuous relationship which continued when I returned for the Christmas holiday.  It was when we returned home it broke my heart to see how lonely Gatsby was, his only activity beside lying on my legs while I watched TV,  was playing with his favorite toy, The Cat’s Meow,  and his pom-poms, so I decided to get him a companion.  I went to PetCo adoption center and found a female cat 2 month younger than Gatsby with a write-up indicating she was good with other cats.  I brought Smokey home on December 30th.

Gatsby was not appreciative.  When he spotted Smokey, he froze, one paw in the air, hair on end, and slowly backed up.  Smokey would roll over on her back in front of Gatsby, but his entire body language was fight or flight. 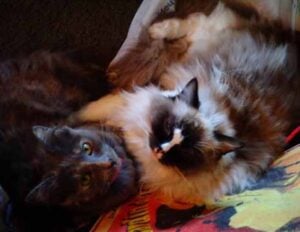 Finally I put Gatsby in one room with a baby gate, and let Smokey roam the house.  I tried moving their food dishes to either side of the door, but he wouldn‘t eat, so I left the baby gate partially open.  One night they discovered that they could put their paws through the slit in the hinge side of the closet door when it was open, and all of the sudden they were batting at each other through the crack! I was so excited I called my granddaughter close to midnight!

Their running has kept Gatsby from gaining weight so fast (from 2 pounds 3 ounces kitten to 11 pounds 14 ounces at 1 year on his birthday on Valentine‘s day) and Smokey holds her own, although she is only 7 pounds 4 ounces.

They have become inseparable - running, playing, wrestling.  Makes me so very happy! 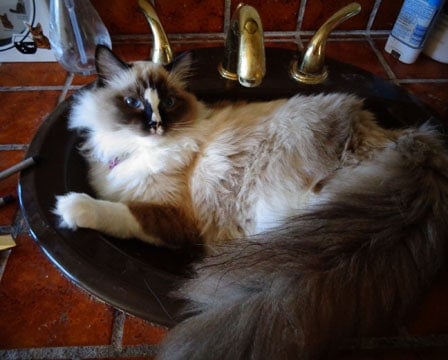