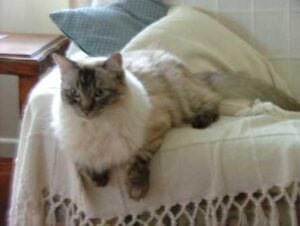 I recently got a Ragdoll of the Week submission for Pasha, a Seal Lynx Point from GUYSNDOLLS Ragdoll Cattery in Australia.

When his owners wrote in to submit his story, they said he was a Seal Tabby Point, but when I saw his photo, I thought for sure he was a lynx - now that I have a blue lynx mitted Ragdoll cat, Trigg, and have been doing this website for almost 3 years, I feel like I am better at identifying colors and patterns.

So I wrote Debbie Le Strange of GUYSNDOLLS Ragdoll Cattery to verify that Pasha was indeed a Lynx and not a colorpoint and this is what she had to say:

"Unfortunately over here in Australia, they just will not listen, every time I send in my registration papers for my litters, I put Seal Lynx Point, or mitted or bi colour, which ever the case may be...................but they persistently keep sending the papers back with "Tabby" on them. I have told them over and over again, but they will not put it on the papers, because the Birmans are tabbys, they think that they all should be registered as the same."

I am by no means a breed expert, but I find this so interesting and wanted to share it with my readers - clearly Lynx exists and Ragdolls has had that designation in other parts of the world, including the United States, where they originated, so what's the hold up