Elvis and Beverly Leslie - Ragdolls of the Week 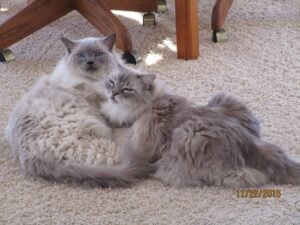 In 2013, after my beloved Maine Coon (Oscar) passed away, I started looking at cats on online rescue sites. I knew I wanted a big fluffy boy cat, so I first looked for a Maine Coon. Finding none within reasonable driving distance, I started looking at other breeds that I knew were typically large, laid-back, and fluffy. A friend of mine used to talk about how much she loved Ragdolls, so I typed that into the rescue site breed search.

Up popped Elvis and his brother, Beverly Leslie (Beverly is named after a character on the TV show “Will and Grace”; Elvis is not named after any Elvis in particular). They were littermates who were 7 years old and purebred. They were still living with Brian, the guy who had had them since they were kittens, but he needed to find new homes for them because his living situation had changed and he couldn’t offer them the care and attention they needed. But he thought the brothers should go to different homes at that time because of behavioral issues. 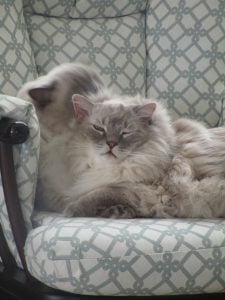 Elvis (back) and Beverly Leslie (front)

My Oscar had been what I call a high-maintenance cat (aggressive at times, got me up at night, etc.), so when I saw Elvis described as “passive and low energy,” I thought, “Bingo! That’s just what I need.” I drove an hour to meet him and took him home that day for a week’s trial to see how he adjusted and if he was healthy.

He did great, got a clean bill of health from the vet, and I fell in love with his sweet, laid-back personality. Then, two years later (this past August), Brian contacted me and asked if I knew anyone who might be able to give Beverly Leslie a good home. He had not adopted him out previously but needed to now. I asked around but found no one, so I offered to take him on a trial basis to see how he and Elvis got along. As one would expect, Beverly Leslie was scared and defensive for a few days (I kept them separate except for very brief periods), but then he relaxed and it was as if they remembered each other. After talking with Brian, I surmised that the behavioral issues may have been because dogs had been introduced to the household and were not actually issues between Elvis and Beverly. 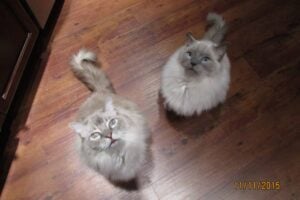 These days, they live together just fine. They seem evenly matched as far as dominance goes. Sometimes Elvis is the aggressor, sometimes Beverly is, and they don’t fight – they just play-fight at times (which is hilarious — two balls of fur wrestling) and let each other know when they’re not in the mood to play or when they want the “best” bed, window perch, etc. They groom each other’s heads and necks several times a day.

Beverly Leslie is the more sensitive of the two, but he’s also very sweet and social. I call him my “Walmart greeter” because he greets anyone who comes in my home. Elvis is just a big, sweet lug who will let me rub his belly or snuggle with him any time. He usually sleeps next to me in the bed all night long and loves to lie between my keyboard and monitor when I’m working on my computer.

I absolutely adore “my boys” and have definitely fallen in love with the Ragdoll breed. 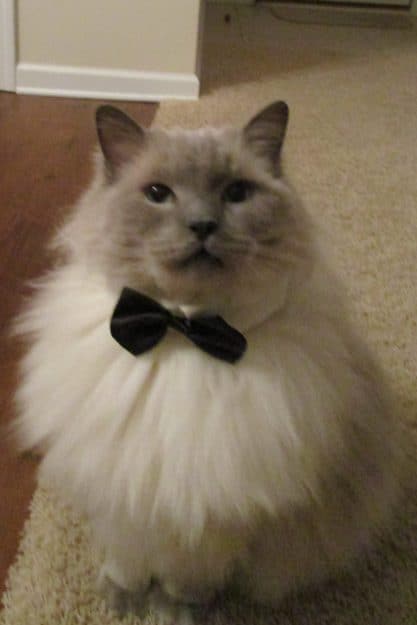 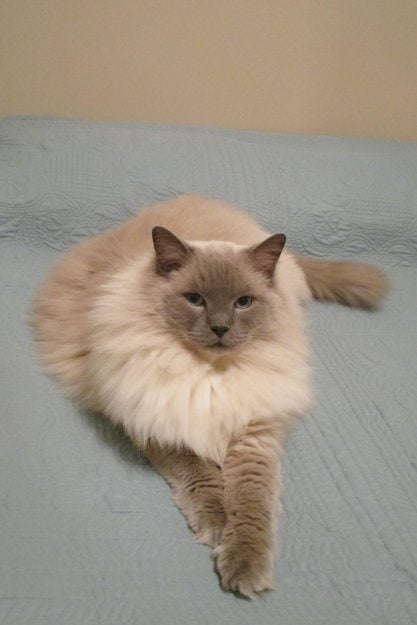 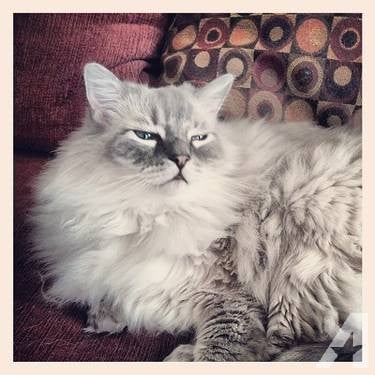