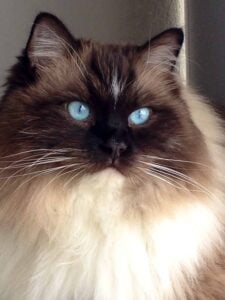 My Ragdoll is named Bradley and he is almost 3 years old. In my opinion he was meant to be for our family. My first cat I had for 20 years and the second for 17 years. My last cat had passed away and I really wanted another furball in the house to love. I had always gotten my cats from a shelter but I really wanted to get a ragdoll so I researched breeders and found one that I thought was very good. I found Chamidolls Ragdoll. I lived in both Atlanta, GA and Birmingham, Alabama but Chamidolls was in Tennessee. However, I really like the way this breeder raised kittens and cats so I decided I would make the 5 Hour drive to get Bradley. Just before going to get him I was informed by the breeder that they were moving to a little town in Alabama which happened to be about 15 minutes from where I live. Then I knew it was meant to be for me to have this little seal point, mitted ragdoll kitten! By the way, I can highly recommend this breeder! 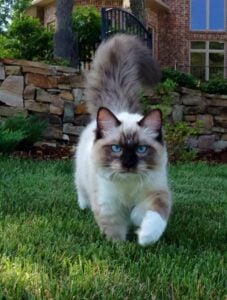 After we got this cute little 12 week old kitten our family fell in love with him. My husband wanted to name him Bradley because that was his mothers maiden name. I wanted to name him after a war hero and seal team member named Al Ashton who had just passed away and was a great friend of ours. Well we also wanted to add Morgan to the name because that was the name of Bradley's father. So we chose the name Bradley Al Morgan. After looking at that name we decided to add an additional name and call him "Bradley Al Morgan Ashton" so his initials are BAMA (Roll Tide Roll). Yes we are huge Alabama football fans!

A few months after we got Bradley, we were transferred to Germany. He has more frequent flyer points than most Americans! It's starting to get very hard transporting him back and forth because of his size pushing 20 pounds. So we made the decision to leave him in Alabama in our home where my son lives with his wife and their cat. It has been one of the hardest things for us to do and we miss him so much. I Skype with him a couple times a week, and he always rolls on his back and purrs when he hears my voice. I go back to the states every six weeks and we only have a few more months to live here before returning to Alabama to retire. 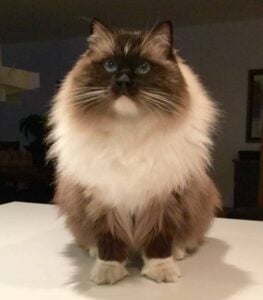 Bradley loves to play, he is definitely a kitten at heart. He loves to chase ice around the house and he is a master at catching lizards. He loves to snuggle at night and I sure do miss that right now. Bradley gets along very well with my sons cat who we call his big brother. The two of them are enjoying playing in the backyard....something he couldn't do in our apartment in Germany. I think he's very happy having a yard to play in and a brother to play with but I know he misses us as much as we miss him. Our mission here can't end soon enough so we can get back to having Bradley around us! 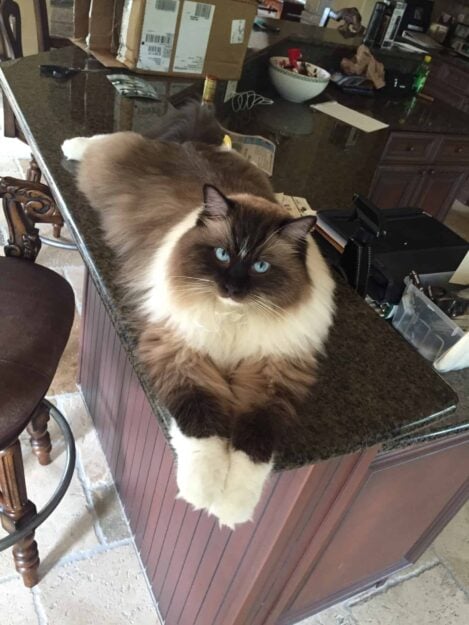 He knows he's not supposed to be on the counter

Bradley and his big brother Ace 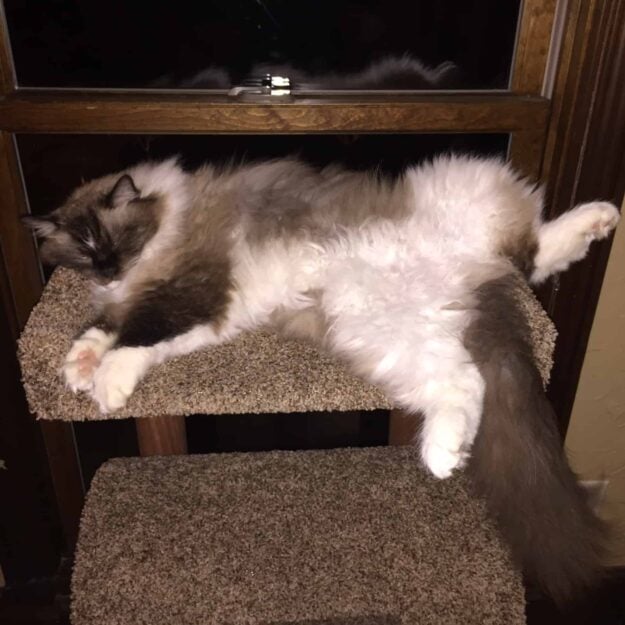 I got him this new bed but it looks like he's too big for it! 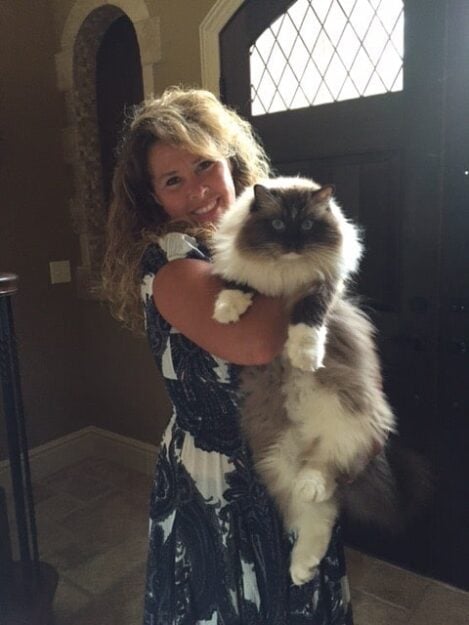 Saying goodbye to him for the first time. It will be a long six weeks without him