My introduction to Ragdoll Heaven came through a fine gentleman named Bailey Griggs. Little did I know he would change my life forever. 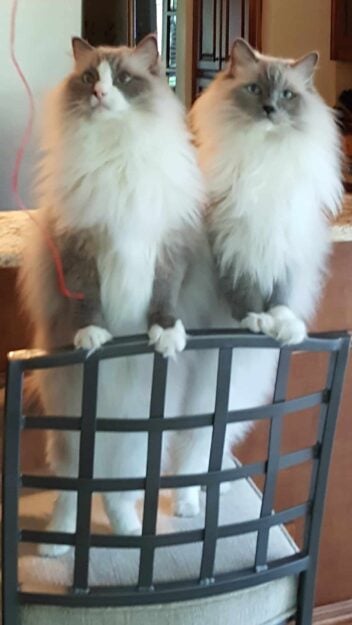 Bailey Jr. and Baxter Jr. like to hang out together.

I was living in Houston, Texas, with my beloved Miniature Schnauzer, Kasey. We would go for walks in the apartment complex, and sometimes pass a beautiful, long-haired cat, adorned with a bright blue collar that matched his sapphire-colored eyes. As he sunned himself on the porch, I reflected on how I had never seen a cat like that before. 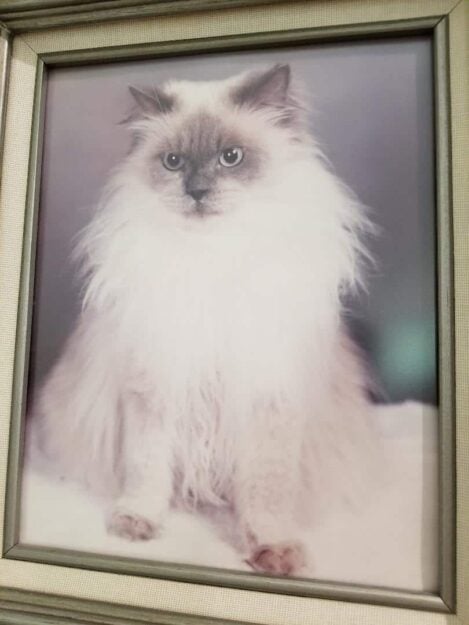 Bailey Sr. sits for his portrait!

Weeks later, I spied a furry creature in the bushes and thought it was a dog, maybe a Lhasa Apso. But it was the beautiful cat. Only he no longer looked lovely; his fur was matted and even falling out in places. He was skinny. And he was no longer wearing the blue collar. 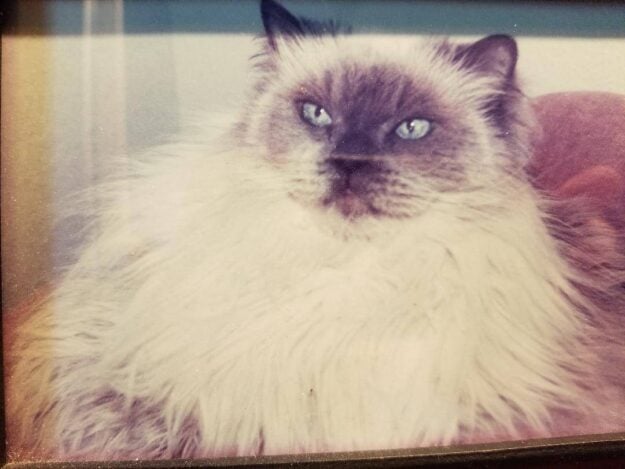 Bailey Griggs: A man in full.

It didn’t take long before he followed Kasey and me upstairs into my apartment! I wasn’t sure what to do with him, so I took him to the vet. I was told he had ringworm, but other than that, he was in okay condition. He just needed some TLC. I think the staff at the clinic was hoping I would let one of them have him, but by then, I knew we were meant to be together. After all, Kasey, who had been an “only pet” all her life, had already warmed up to him. 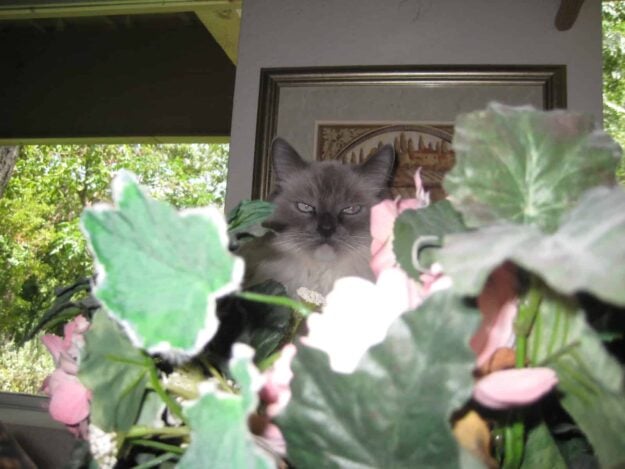 Baxter Sr. in the jungle.

I determined that the cat was a Ragdoll and figured he had simply been abandoned by his previous owner. Basically dumped. Don’t even get me started on the type of people who do that to animals, let alone their own pets. 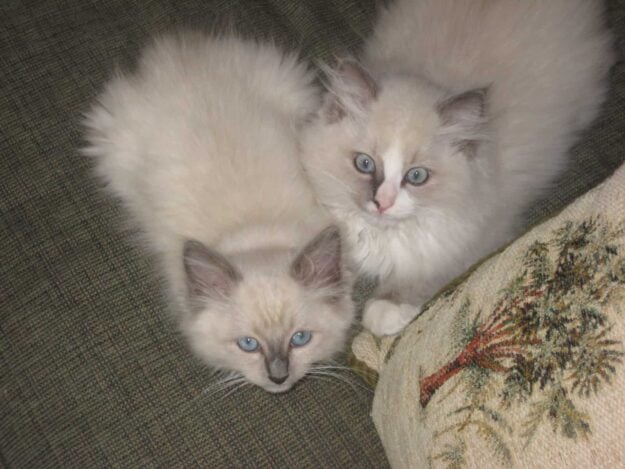 I decided he needed a great-sounding name and named him Bailey, after a favorite baseball player from decades ago. One day, I was driving along the freeway and saw an exit for Griggs Road. That’s when I christened this beautiful creature Bailey Griggs. Has a ring to it, huh? And his luxuriant fur eventually grew back – enough for him to win the Best Coat trophy at a local cat show. Boy, were we proud. 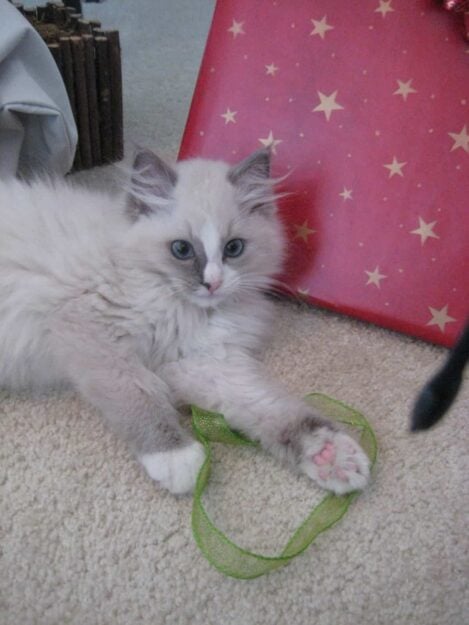 Baby Bailey would grow up to be a large, luxuriant Ragdoll in his own right some day.

Whenever I’ve told this story, people have said I didn’t choose him, he chose me. 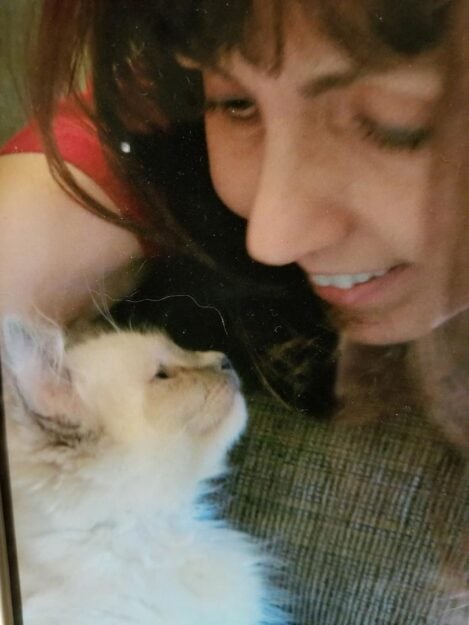 When I moved to Fort Worth, Texas, I talked with a co-worker who had coincidentally lived at the same Houston apartment complex. He told me he had seen the cat too, and had tried to lure him in. Yes, I guess he did choose me. 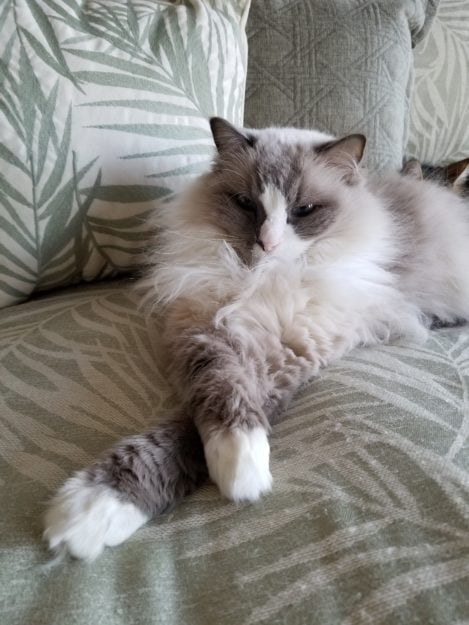 Bailey lived a good long life. But as we can all sadly relate, the early spring day when he passed broke my heart. The Texas bluebonnets appeared early that year – as if to welcome him home. I still fight back tears when I think of this wonderful cat, who will forever be my soul mate. He and Kasey were my constant companions and always there. We three even took road trips to Pennsylvania together. 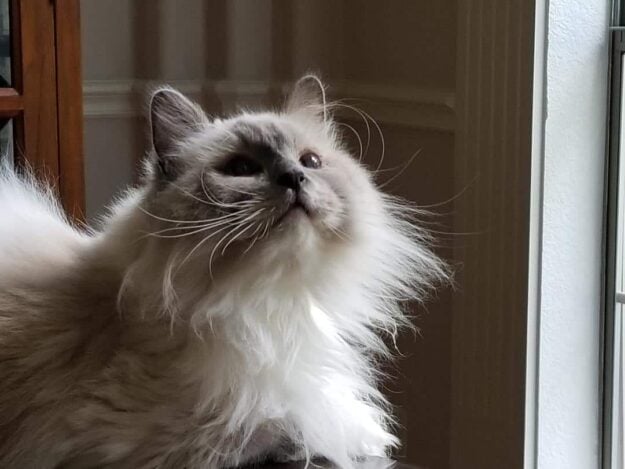 In fact, on the sad day when Kasey had earlier passed, Bailey climbed up on the sofa and with his usual knowing glance, sat next to me to offer comfort. He was an amazing Old Soul.

Bailey was my first Ragdoll and paved the way for my second Ragdoll love, Baxter Griggs, who was born in College Station, Texas. Baxter had the sweetest personality and meow, and used to look after his little shy friend, a black-and-white rescue cat named Pele.

Another special gift, Baxter has also sadly passed, leaving his magnificent legacy in the paws of two other wonderful Ragdolls. Naturally, they are named Bailey Griggs Jr. and Baxter Griggs Jr. 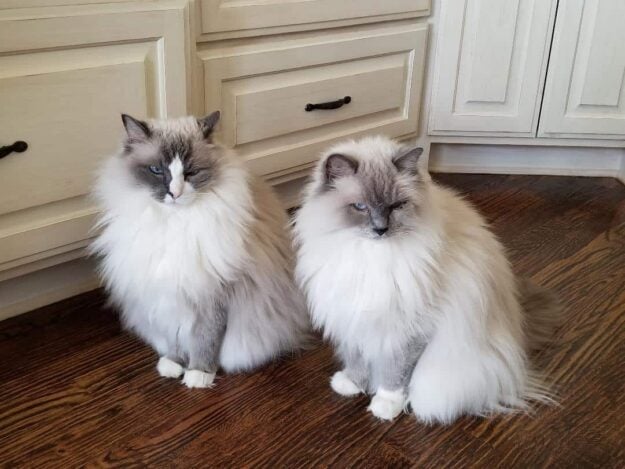 What kind of trouble can we get into next?

Bailey Jr. hails from Heavener, Oklahoma. Is there a better name than Heavener for these beloved creatures? He comes from the fine stock at Laurie Wagner’s RoyalDolls Ragdolls. As her website says, the kittens are “melt-in-your-arms sweet.” I don’t think Bailey Jr. ever has a bad day. He’s chunky and strong and when he sweetly gazes at you with his azure eyes, you’re his forever. 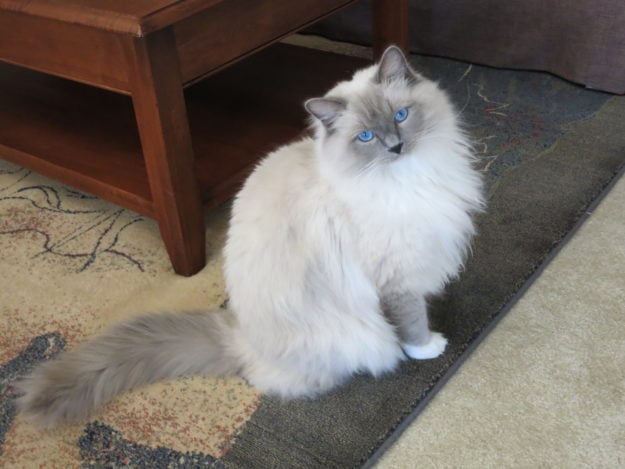 Baxter: Who could not love this sweet boy??

His brother, Baxter Jr., is from Anne Paul’s Cajun Ragdolls from Westlake, Louisiana/Houston, Texas. This sweet, yet mischievous boy has the softest rabbit-like fur and likes to skitter through the house and up and down the stairs – just like the Ragdoll in the Swiffer commercial. The guy knows he’s a Star.

They have so many nicknames, it’s hard to keep track. Bailey Jr. is also Bau Bau (Pretty Boy), Billy and Pumpkin, and Baxter Jr. is Child, Papa-Doodle-Do, Tiny Dancer and Badster (when he’s naughty). He’s also Who Dat Cat because he hails from Louisiana. 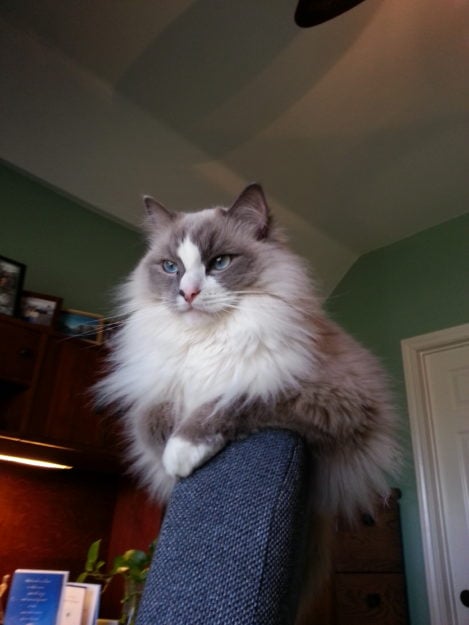 Bailey: "I'm the king of the world!

They are both “twisty guys” when asleep and they like it when we whistle. And they love to nosh side-by-side at their “food court.” Basically, they can do no wrong, right? Even when they shed, their fur is deemed something mystical, like Ragdoll Dust!
The boys have some beloved siblings too, including their Tabby Tigger nieces (Cassidy and Sundance), Maine Coon sister (Jazzy) and of course, another Miniature Schnauzer, Riley (who insists she’s a cat too). 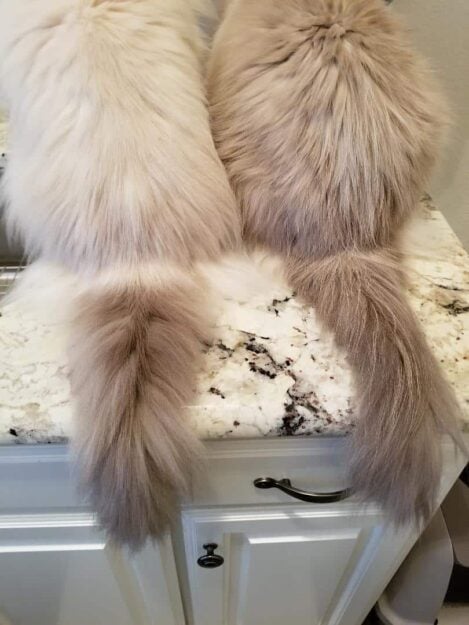 It’s hard to imagine what it would be like without these wonderful friends who manage to make life on earth seem like a little bit of Heaven.
At least until we all meet again.