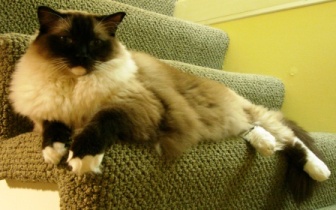 Animal communicators are becoming more common as people learn more about their animals and wanting to take care of them. Pet communicators are people that have pet psychic communication ability or an animal telepathy. They provide interspecies telepathic communication. Many animal communicators have the goal of being able to provide the animal with the ability to communicate with his or her owner, so that problems can be resolved and the animal can live more comfortably. Holly Jacobs pet communicator regularly spoke with Rags. Her number is (816) 686-0858. You’re also welcome to email her, if you’d prefer: Email Holly Jacobs animal communicator. Holly is able to communicate with your pet telepathically, so she does not have to live in your area to communicate with them. Here is a quote from a Ragdoll owner who used another animal communicator to solve some of the problems she was having with her cat (this could be a testimonial, if you will, of animal communication): “No I haven’t recorded anything but I did want to share with you my experience with an animal communicator since it happened before you joined. I was having 2 problems with my 3 cats. One problem is someone was peeing in odd places and I wanted to know who and why. The other problem was my youngest Ragdoll, Benji is afraid of 2 1/2 year old black cat Tommy. What I did was have an IM session on yahoo with the communicator. She gave me the choice of phone, email or IM and I picked IM. I found it to be very worthwhile. I paid $30 for a session that was supposed to last 30 minutes but actually ended up being about 45 minutes. She didn’t charge extra even though her website said she would. She didn’t need my cats to be in the room. I just typed to her what I wanted to know and she “thought” at them and typed back to me what they told her. First, I want to say I’ve had many unsuccessful phone sessions with regular human psychics to discuss my own life in the past(years ago). I got along much better with this animal person. There were times when we were both typing almost the exact same words at the same time. She told me it was Katie peeing in the odd places because she was jealous of Benji. But Katie wanted me to know Benji has also had a few accidents when he was afraid to go by Tommy to get to the litter box. However, she’s feeling confused because she does like him. Then she tried to make Benji understand that he’s bigger than Tommy now, Tommy isn’t trying to hurt him and just wants to play. She told me she explained to Katie how much it hurts and insults me when she pees anywhere other than the litter box. I won’t try to say a miracle happened immediately. Katie did still pee on a couple cat beds which she apparently didn’t define as “mine”. Tommy’s attitude changed immediately because I was correct to guess he does want to play with Benji and he was happy to think it would happen. Benji became a little more relaxed but still won’t play with Tommy. Katie wants to play with fishing pole toys with me alone. The communicator asked me if Katie does tricks and I said no. She said she saw a picture of Katie waving at me. I immediately knew it was the picture I took of her on her birthday when I was playing with a toy with her and caught her waving. Anyway, sorry I couldn’t answer what you actually asked but I think you’ll love talking to a communicator!” Gail used Gayle Nastasi of Gazehound’s Animal Communication. Please see the link to Gazehound below. Another animal communicator, Debbie McGillivray, wrote a book about animal communication, Complete Idiot’s Guide to Pet Psychic Communication (The Complete Idiot’s Guide)