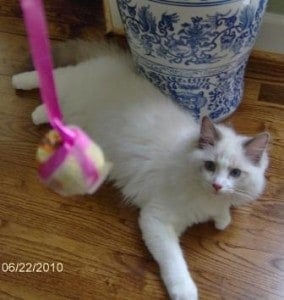 I was visiting my sister in NY and became enchanted by her adorable Ragdoll kitten, Lilly. We visited my sister’s friend who had Lilly’s sister, Penny, another beautiful Ragdoll, a large, sweet lap sitter. My sister and niece encouraged me to get a kitten, and so I considered it.

After a long cold winter in my new place, I decided to warm things up and make the house a home by getting a kitten. Did a little research and found that the characteristics of the Ragdoll breed would make the perfect pet for me.

I started some Internet research on how to find a kitten, called around, and eventually found a reputable breeder in the Chicago area, not too far from where I live: Cathy of Ballerina Ragdolls. Unfortunately, she had no kittens available. Shortly after that, I awoke one morning ruminating about getting a male instead of a female kitten, which I had originally requested. A half-hour later, Cathy called me and told me a blue bicolor boy had become available.

I went to meet him the next day…a little ball of fluff—too adorable for words! I was smitten and on a high after visiting him and all the other kitties. 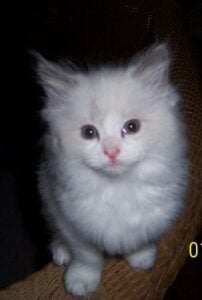 This is Valentino: so elegant and gorgeous, born on Valentine’s Day. He’s a little love-bug! And a bonafide purring machine.

He follows me wherever I go in the house and stays near me wherever I am. My favorite part of the day is waking up with him sleeping right next to me . I’ve taken to staying in bed later than I used to just to pet him and hear him purr.

It cracks me up the way he wakes up from a nap, sits up with eyes closed, and then at my touch falls over on his back purring, silently asking me to pet him. He often lays on his back in true Ragdoll fashion and stays limp when I pick him up and carry him around like a baby.

Many people think of all cats as being the same…but that is not true.! Breeds have distinctive characteristics. And the Ragdoll is much more people-oriented than most other breeds. They like to take part in everything you do; as if they´ll miss out on some fun if they don't constantly follow at your foot steps, just like dogs do.

Basically, Valentino likes to be anyplace where there´s some action.

At the sink when I am washing dishes…

Waiting outside the shower door for me. (He loves to watch water)… 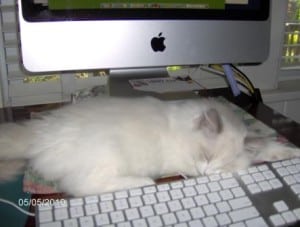 Sleeping in the small space between my keyboard and computer screen.  And the bigger he gets, the more typing mistakes get made!

He loves his cat tree and especially likes to sleep on the top perch. His extra sturdy Molly and Friends cat tree was a great purchase and worth the extra investment for its high-quality. 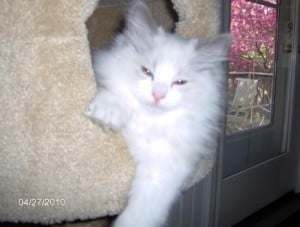 Even though every day he gets 3 meals– plus a  midnight snack– each time he eats with gusto, like he hasn’t eaten for a week!

I love how he trots over to his food dish , purring, with his tail up in the air purring even as he gobbles his food.  Often after his late night snack he’ll tear around the house in a playful mood before settling down to sleep.

He loves all his toys, from the fancy store bought ones to little balled up candy wrappers. Wiggling toes beware! And for some odd reason he goes crazy in the bathtub, chasing his tail and acting crazy.

Now that his eyesight is developing, he’s beginning to enjoy sitting by the window watching the birds and trees. 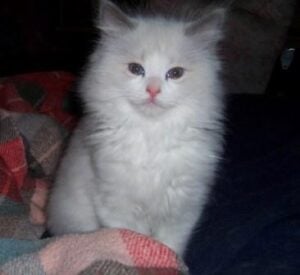 He’s such a good boy -- always uses his litter box , scratchy pads and scratching post and he comes to me when I call him.  When he calls me with a meow, I am on the case.

He’s got his Mama wrapped around his paw; I’ll admit it… I am kitty-whipped!

Valentino is my precious and adorable little angel and I wouldn’t have it any other way!! 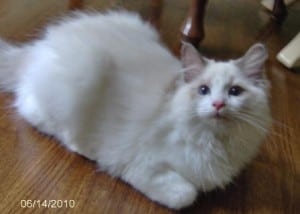 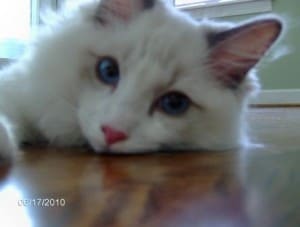