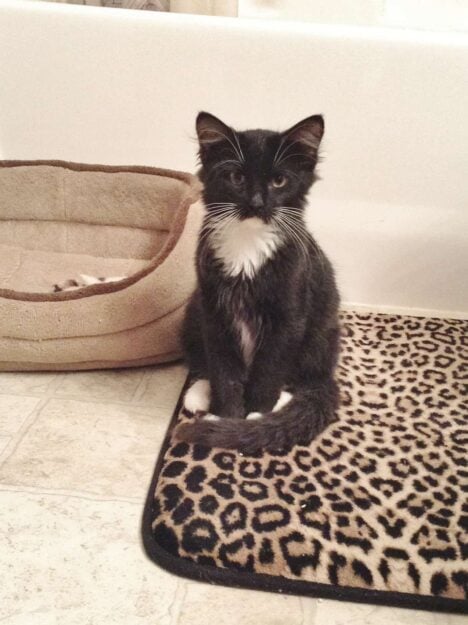 On August 24, 2013, Angelo started life as a newborn found in a ditch with his brother and was taken to a rescue to be bottle fed by kind fosters. At first, they thought he was a little girl, so they named him Angelina but soon realized their mistake and changed his name to Angelo.  His brother didn’t make it, but Angelo survived and slowly grew stronger. He remained in foster care as the rescue considered him to be a special kitty. 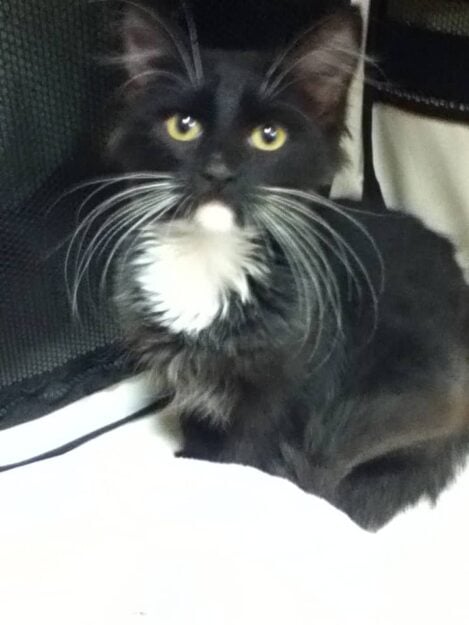 Apparently, his male part is very small, and he would need to be on wet food only, to avoid any urinary issues. (That’s why they thought he was a girl at first) They wanted to make sure anyone who adopted him would understand this. So he remained with a foster for the first six months of his life. That’s when I saw him on Angel of Hope’s website. He reminded me so much of my dear departed Merlin, that my heart just went out to him. I asked about him and they said I could come to a PetSmart adoption event and they would bring him there. At the time, I already had my little Ragdoll Nicolai who really needed a friend to play with as my senior kitty wasn’t much interested in playing. 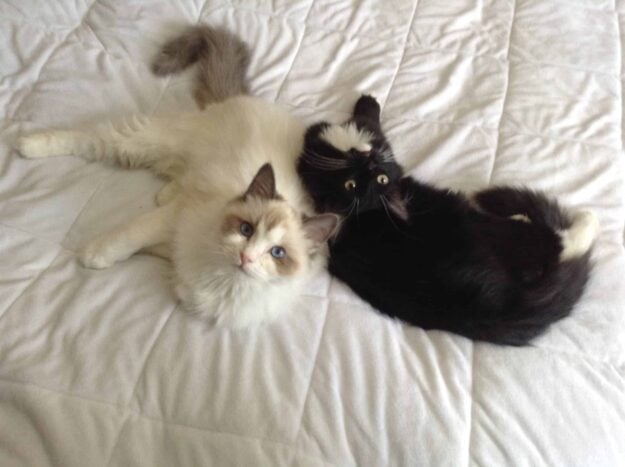 When I saw Angelo in person and held him, he just relaxed in my arms and seemed very calm and easy going. Just the right sort of personality that would fit into my home. I carried him around for quite a while but went home without him that day as I really wanted to be sure I was doing the right thing in bringing in another kitten. I didn’t want to stress out my senior cat. She was my priority. 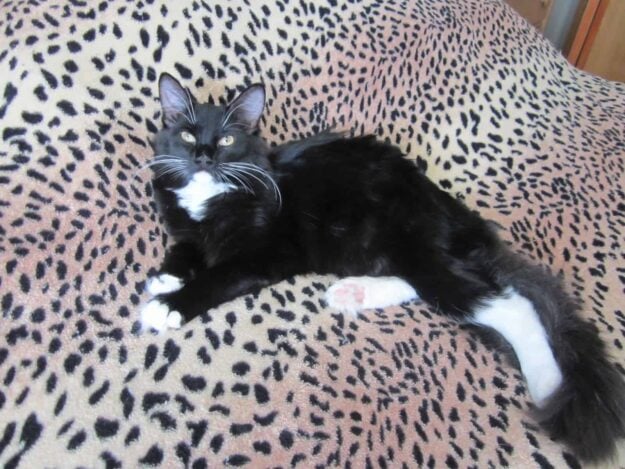 I kept looking at Angelo’s picture every day after meeting with him and realized I couldn’t stand it if someone else were to adopt him. I contacted the rescue and said I would take him. They brought him back to the PetSmart the following Saturday and I brought him home. I liked the name of Angelo that they had given him so ended up just keeping that name for him. Easiest cat I ever had to name.

Trying to do the right thing and slowly introduce him to my cats, I set Angelo up in the bathroom. After about an hour of listening to him cry in the bathroom, I couldn’t stand it any longer and I let him out. After a few hisses all around, Angelo and Nicolai soon became friends. So much for trying to do the slow introductions but then kittens are so easy. My senior cat Minx just ignored him so that worked out fine there too. (She has since passed on in 2014). 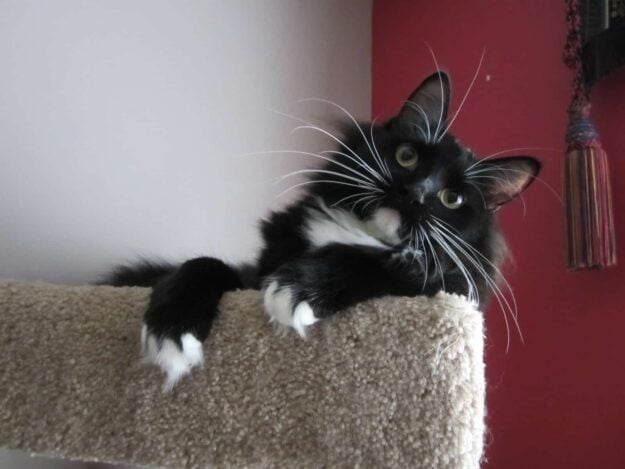 Fast forward five years and Angelo and Nicolai are good friends and still love to tear through the house in high energy chases. They also get some supervised outside time. Nicolai must be on his harness or he will explore too far, but Angelo is more of a scardy cat so he sticks around pretty close so that makes it easier. Towards the end of Summer Angelo does get a little braver and that is when the harness goes on, but a good shake of the treat bag gets both running back inside whenever I need them to come in. 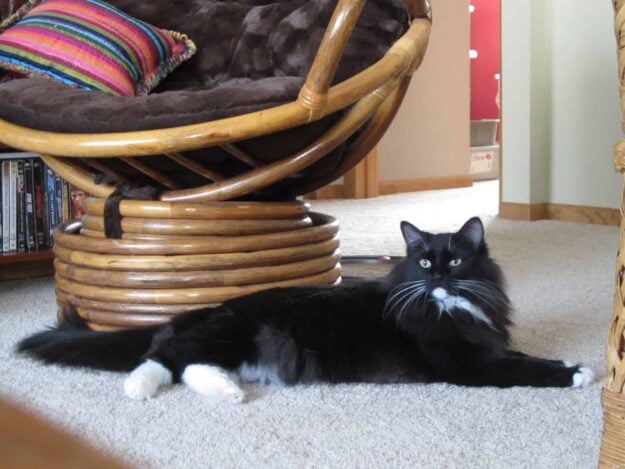 Even though Nicolai is the Ragdoll, Angelo is more of the “floppycat”. He loves to be held and snuggle and he really does flop in my arms. My departed Merlin, also a tuxedo, was the same so Angelo, even though a very different personality, is still a lot like Merlin in other ways. 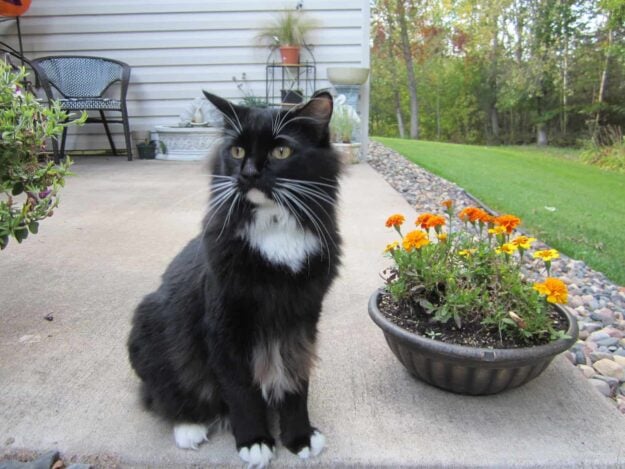 I kept my promise to feed Angelo wet food and they both get Fancy Feast canned food, along with some other grain free wet foods like Taste of the Wild for variety. I do give them just a handful of grain free dry food (PureVita, Acana, and/or Orijen) that they think is a treat more than food. I put some of the dry food in a treat ball and that helps keep the cats entertained while trying to get at it. And they love it when I scatter pieces of the dry food throughout the house for them to “hunt”. The main food, though, is the wet food and I have noticed that there are no hairballs despite all the hair and the litter box is definitely easier to keep clean with less waste. 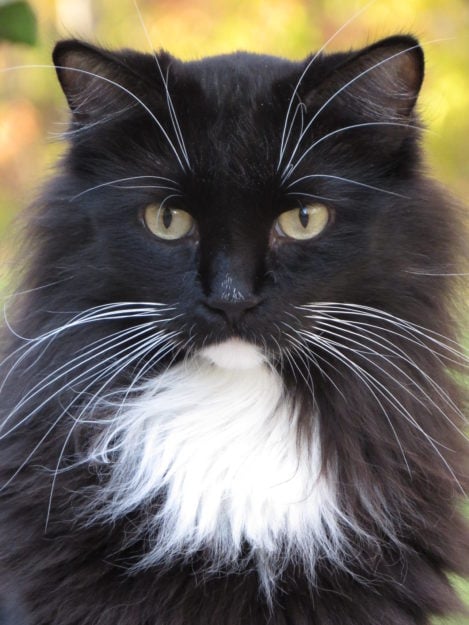 I love that every night my kitties come to sleep with me. Angelo finds his place pressed against my back and it is so comforting to feel him there. Nicolai chooses the foot of the bed but I love his greeting every morning with a gentle paw on my face. Such sweet kitties. They both bring smiles to my face every day. You can check out Nicolai’s story in his own “Ragdoll of the Week”.