Nicolai - Ragdoll of the Week 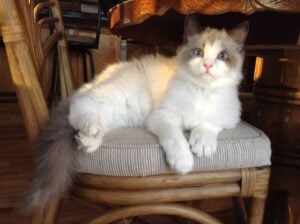 I wasn’t looking to bring a kitten in to my life just yet. My dear Merlin and fur soulmate had recently passed on. He was a glorious medium hair tuxedo cat and my heart was still hurting. However, I found myself idling looking at all the cats on the adoption sites, not really looking, but still just checking out all those wonderful furry little faces needing homes. At one point I happened to go over to the page of a Ragdoll breeder I knew, Arctic Blue Ragdolls in Minnesota, just to see if there were any kittens available. I knew this breeder from my Cousin who raises and shows Bengals. I fell in love with the Ragdoll through seeing all of the Arctic Blue Ragdolls at the local cat shows. There usually never were any kittens available on the Arctic Blue

web page so I wasn’t expecting much. When I clicked on the kitten page, however, I was surprised to see a picture of the sweetest little kitten face. Right away, before I knew what I was doing, I emailed the breeder to ask if the kitten was still available. She replied back saying no but that she did have some older siblings of this one available that were six months old. OK, I thought, and asked if she could send me pictures of them, still not really believing I wanted a kitten at this time. She sent over pictures of three different kittens, two boys and one girl. The kitten in the second picture she sent stole my heart right away with his sweet face. Before I knew it, I was arranging a time to come out and “just look” at the six month old kittens that she had available. I spent a good deal of time at the breeder’s, just soaking up all the fluffy Ragdoll beauty. The little one I had liked in the picture was shy and the breeder told me that he was the runt of the litter and that it had been touch and go for him right from the beginning. His mother’s milk had gone bad and that litter had to be bottle fed. Two got really sick and the one I liked got so bad that they didn’t think he would make it. With lots of attention and medication, he did pull through but still had some sneezy, runny 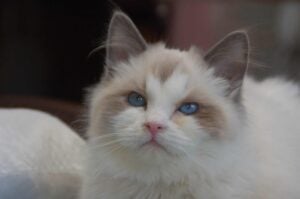 eye issues that I would have to take care of if I still thought I wanted him. Well my heart was already stolen, and this story only made me melt towards him even more, so what could I do? Poor little guy. He came home with me that very day.

I called my little fur baby Arctic Blue Nicolai, though it was a long process of trying to find just the right name for him. I tried many out, but none seemed to stick and finally someone said, just pick one. Give the poor kitty a name already. I think it was a good two weeks before I finally decided that Nicolai it should be, with his full registered name being Arctic Blue Nicolai. He came to live with me on the 18th of December, just before Christmas so Nicolai fit for the Season too. 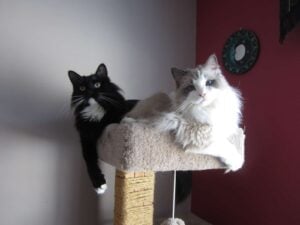 I had a very senior female cat at the time and I was worried about bringing in a rambunctious kitten, but Nicolai was so very respectful of my dear senior that she was just fine with him. I would watch Nicolai run and hop-jump up behind her as she would walk by and reach out a paw, but he never touched her. Somehow he knew he should be careful with her. That told me, however, that he needed a friend his own age to play with and thus began a search for just the right one to fit into the family. I ended up adopting from a shelter a very mellow Tuxedo kitten only 2 months younger than Nicolai who would also be respectful of my senior. Little Angelo had been a bottle fed baby too, found as a newborn, and reminded me so very much of my dear Merlin that the choice to bring him home was easy. It was a perfect match for all of us and the two kittens became best friends. 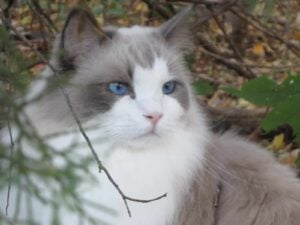 Today, Nicolai is a very confidant two and a half year old. He has the classic Ragdoll sweetness, but he also has a bit of his own “attitude” to temper the sweetness. He Is strong willed and likes to get his way, which he usually does, and lets you know when he has had enough holding time. Unlike the classic perceived floppiness for which the Ragdoll breed is named, he doesn’t care too much for being held for very long, which I am finding out from other Ragdoll owners that this is not that unusual. He is very smart and I find I have to use reverse psychology on him at times to get him to understand manners. He is learning, but he keeps me busy trying to keep him entertained so he doesn’t get bored. His favorite toy is a thin wire with bits of wood/cardboard on the end which he loves to chase and leap in the air to catch. Actually anything dangling at the end of a string, rope, whatever, is great fun for him and he expects his play time every night after dinner. 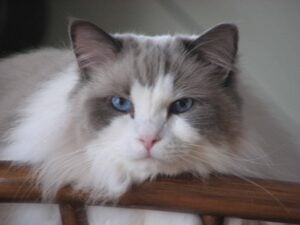 I taught Nicolai to get used to a harness early on and in the warmer months he enjoys some supervised outside time. It helps keep him occupied and when I can have a screened window open, that is just great. Both cats can sit for hours taking in the fresh breezes and enticing smells.

They both get the Wellness canned, grain free food, along with Fancy Feast, and just a handful of grain free dry food that they think is a treat more than food. I also put some of the dry food in a treat ball and that helps keep the cats entertained while trying to get at it. And they love it when I scatter pieces of the dry food throughout the house for them to “hunt”. The main food, though, is the wet food and I have noticed that there are no hairballs despite all the hair and the litter box is definitely easier to keep clean with less waste.

At almost three years old, Nicolai is still only around 11-1/2 pounds so not a big Ragdoll, but then he was the runt of the litter. He is a happy kitty and in great health. My little guy has definitely made himself at home and I cannot image life without him now. 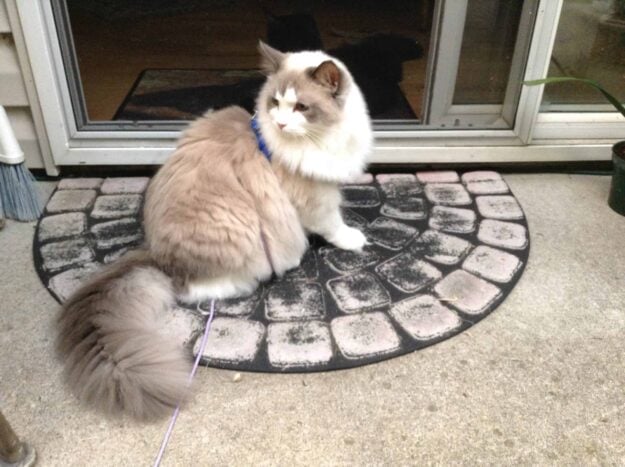 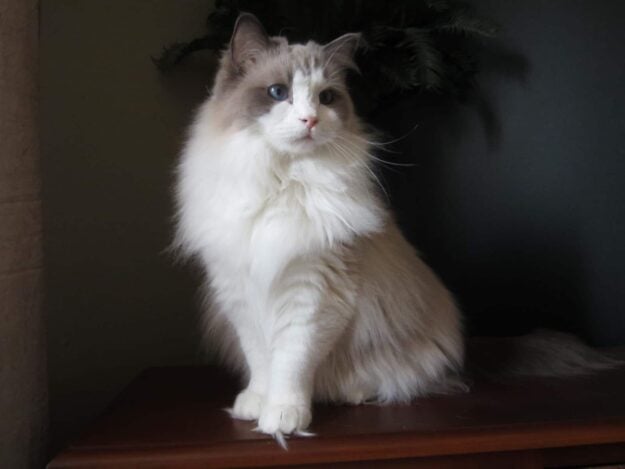