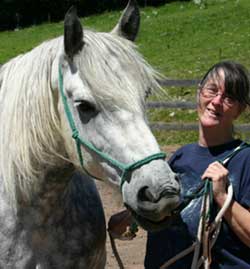 Floppycats.com asked Gayle Nastasi, a pet talker, to answer some questions we had about animal communication as well as questions about her services. Thank you, Gayle for the interview.

Gayle Nastasi is located in upstate New York can be reached through her website:  http://www.gazehound.com

Answers are Copyright of Gayle Nastasi.

1. How long have you been communicating with animals?

I've been talking to animals, or sensing their feelings, physical sensations, thoughts, etc, for as long as I can remember.  As a child, the neighborhood pets all seemed to gather around me.  It was about fifteen years ago, however, that I began studying animal communication as a possible profession, and I accepted my first actual client in the year 2000.

2. How does one communicate with animals?

I'm sure different communicators have different methods.  For myself, I receive a myriad of information when I communicate with an animal.  It varies depending on the animal and the situation.  I receive sensory input such as images and sounds.  I feel what the animal is feeling physically which can be helpful when, for one example, a vet is trying to figure out "where it hurts".  Animals send me thoughts and emotions, and that emotional input can often be extremely crucial in helping people understand their animal's needs.  Sometimes, I will receive what I refer to as "entire knowings", where the animal will just share a full blanket of all sorts of information with me at once.  I think of the information that comes in as puzzle pieces, which I will then try to sort out, "translate into human", and discuss with the animal's human friend.

3. Can you share with us, one of your favorite animal communication stories?  How it impacted the owner or the animal or both?

Oh, my, there are so, so many.  There is the kitty who had litter box issues, and insisted that her leavings were her artwork, her ability to express herself individually, as she lived in a multiple-cat household.  The marking problem was solved when her human bought her "canvases", in the guise of puppy wee pads, and the cat agreed to use them over the throw rugs and carpets.

There was the lovely little senior dog whom I spoke to so often he began to invite himself into my thoughts every time I took a shower (I guess it was one place he knew he'd have my undivided and immediate attention!).

The story that has the most impact upon not only me, but my whole family, is one which actually affected my husband most strongly.  I was working with a dog who was very ill, and separated from his family during a long stay at a major animal medical center.  I had been talking with this boy earlier in the evening.  It was January, a very cold and bitter night, and the hour was growing late.  The dog happened to be the same breed as my own dogs, and colored very similar to one of mine.  I was in the bedroom reading, and my husband in the living room watching television.  From his position, he could see the back door, which led out to our dogs' exercise yard.  Suddenly, I heard him shouting, "Pascha! Pascha's outside in this cold!" and he ran to the door, calling our dog.  Startled, I jumped up and rushed to the living room to see Pascha, very confused, lying warm and safe on the sofa.  My husband swore that Pascha had been jumping at the back door, trying to get in...and my daughter confirmed that, though she did not see him, she could hear him banging on the door.  On communicating with my client the following morning I discovered that, around that time, her dog had gone into cardiac arrest and had to be resuscitated by the vets at the medical center.  It seemed as if he had left his body, and sought out the last familiar person he'd spoken to before the episode.  That evening will always give me chills when I remember it, and I do remember it often and fondly.

4. Do you prefer to communicate with younger or older animals?

I really have no preference as to the age of the animal.  Each animal brings its own unique energy to the connection.  Just like people, they are all individuals.  Some are serious, some funny.  Some will be very spiritual and lofty, others quite down to earth.  Young animals are always a lot of fun, as many can be easily distracted, and I smile as I chase their thoughts around and attempt to hold their attention.  The elders are often sage and grounding, and can teach us all so very much.

5. Do you prefer to communicate with a certain type of animal?  I mean, do you do better with cats, dogs, horses?  Do you even talk to reptiles?

I do, and have, spoken to reptiles, and really don't have any preference as to species.  Different species have different things to teach, of course, and different ways of expressing themselves.  Within each species, there are as many variations as there are individuals.  I always open my heart to what each individual animal has to share.  Since attaining my wildlife rehabilitator's license several years ago, I work more and more with wildlife, which can be a profound and often humbling experience in itself.

6. How do your services work?  Do you come to my home?  Do I bring my pet to you?  Do you communicate LIVE over the phone or in person?

As I live in a very rural area, most of my work is done either over the phone, via email, or through IM chat sessions (both voice and typed).  For my phone sessions, yes, I communicate live.  My client and I will set up a time that works for us both, and they will call me at the appointed time.  Some people prefer phone or live sessions, others prefer email because it gives them something to print out and save.

I do occasionally do appearances at events, but for various reasons I have had to limit those services.

7. What do you charge for your services?  Do you have a package deal?

At the time of this interview, my rates work out to generally $1.20 per minute.  I have a half hour minimum, though it's not a hard and fast rule, at $36 for the half hour.  Longer sessions are charged at the per-minute rate.  I do have "package deals" in the form of gift certificates sold on the Rates and Services page of my website.  Clients can pre-purchase two and three session packages at a discounted rate.

With the exception of these pre-paid gift certificates, my policy is that I do not ask for payment up front.  I ask the client to wait until they have decided whether our session has been at all helpful, and if so, they remit payment then.

8. Why do you think animal communication is valuable?

Wow, what a question!  I'm not sure I can answer that in a year, no less in one interview.  I believe, at the very highest and most important level, however, animal communication strengthens the bond between humans and all living things.  Not only do people grow closer in understanding their own personal animal companions, their hearts and minds open to the whispers of wisdom shared by all life.

9. Do you think if a vet would incorporate animal communication into their practice it would be helpful?

Oh, most certainly.  I have a number of clients who are veterinarians themselves, and a number of others whose vets will, when faced with a question they would like more input on, suggest, "Why don't we give Gayle a call?"  I've been told by my vet clients that they find it helpful to be able to get closer to the "where does it hurt" answers through tuning into what an animal is experiencing.

10. Are you able to communicate with an animal in the after life?  How does that work?

Yes, I often speak with animals who have passed on, and have grown to think of it as somewhat of a "favorite", in fact.  Having had many losses of loved ones myself in the past several years, it's an honor for be able to provide some comfort to others in their loss.  As to how it works: we are all spirit, whether or not we still wear our bodies.  Speaking with a spirit who has left his body behind is, for me, not all that different from speaking with a spirit who still wears an "earth suit".  One of the most comforting and satisfying things I'm able to do, is to help bring closure to, and renew connections for, people who have had to say goodbye to a beloved animal companion.  There are no true goodbyes, after all...only changes of form as we leap toward new adventures.

Gayle Nastasi resides in the lovely mountains of upstate New York with her human and animal family.  She has been talking with animals and aiding their connection to their human companions for the past decade, and considers it a great privilege to help the animals have a clearer voice.  Her heart rejoices each time she sees the human-animal communication grow stronger.  In addition, she is a wildlife rehabilitator, a web consultant, and an author.  Her new mystery novel, the first in a series for young readers, The Corpse That Wasn't There, will be published by Fehrman Books in the early fall of 2010.