Timmie - Floppycat of the Week

Averill's Timmie L of the Bay 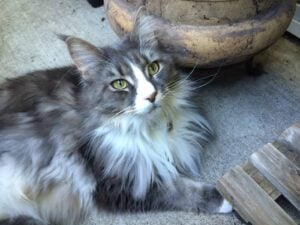 Timmie came from a litter of three, her two brothers were give the Major League baseball player names Buster and Marco, but being a girl, the breeder couldn't think of a name for her, so her first fifteen weeks of life she was known as Little Sis. The day I picked her up from the breeder just so happen to be the day after Tim Lincecum, of the San Francisco Giants, pitched a No Hitter...*light bulb moment*...the name Timmie (female spelling for Timmy, which is what many call Tim Lincecum) landed right at my new kitten's front paws! 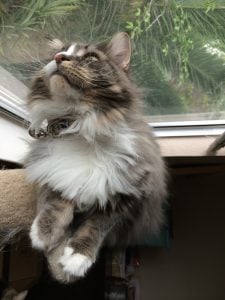 A little back story on how I actually found Timmie...I'd been searching for a Maine Coon kitten, from a breeder, for well over a year without success. Two years previously I had lost my best buddy, ten year old Harley, also a Maine Coon, to a three year battle from Diabetes. He was a brown with white Tabby (with white paws...for some inane reason I adore white paws on kitties) and that is what I had been looking for in a new Maine Coon male kitten. The challenges were either the waiting lists, for those same coloring and markings, were several years long, or the prices some breeders were asking were way out of my league.

Along came Averill's Cattery...Julie Averill was not only so knowledgeable of the breed, but invited me into her home to visit her Cattery, she was the first breeder to do so. I was so impressed with her set up, indoors and out, for her breeding Males and Females, as well as the birthing area and the family raised environment for the kittens. Julie wasn't expecting any male 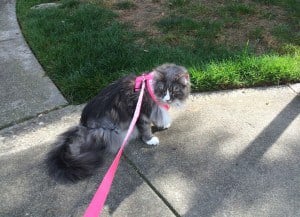 kittens with the coloring I sought for a while into the future, but if I was to consider a female, blue with white coloring, she would give me a reduction on the price (apparently, like myself, buyers wanted only males because they tend to be larger...which is a prominent Maine Coon trait) because she didn't have a buyer for her one female and pretty quickly would have a very difficult time finding a buyer the older she got. Hemming and Hawing (I really wanted another kitten like Harley) I was about to decline when out scampered three kittens...Timmie and her brothers Buster (her exact twin who has gone on to siring his own kittens...Timmie even now has a niece who looks just like her!) and Marco. They flopped around, jumping on each other and skittering to a halt right by me. Julie picked up Timmie and handed her to me (that's one smart lady...she knew the moment I held her I'd be in love)...I'd never held a softer kitten in all my life...she was like holding a giant cotton ball that was purred. I instantly fell in love with that big cotton ball and took her home with me that day...I didn't need any waiting period to make up my mind! 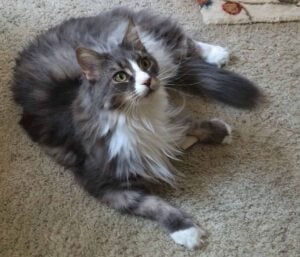 Timmie is truly "A dog in a cat suit" as Maine Coon's are known as...she's harness/leash trained for walks, she fetches, does paw bumps, high fives...and best of all loves everybody (Maine Coon's are known to be very companionable). She's my front door greeter...her curiosity is laughable, the things she gets into...and is madly in love with my six year old grandson, Logan.

Now at 2 1/2 years old, Timmie is weighing in at nearly 16 lbs...which is about average for a Maine Coon female, but Maine Coon's can take anywhere from three to five years to fully grow...so she's expected to settle in at about 18 lbs, just like her mama. She's actually quite tall though, very long legs, and towers over many small dogs we encounter on our walks...she also likes to see what I'm doing when I'm working in the kitchen and has no problem stretching up, putting her paws on the edge of the counter to see what I'm doing and if maybe a treat might be in store for her.

Timmie now has a new little sister, also from Averill's Cattery, she's a brown patch tabby, Averill's Buster Posey's "Posey" Catch (I had a pitcher, now I needed a catcher...of course from the Giants!) who will be trained as a Therapy Cat...but that's a whole other story!

To see more Floppycat of the Week submissions, click here.

To submit your kitty as Floppycat of the Week, please follow the submission guidelines here.