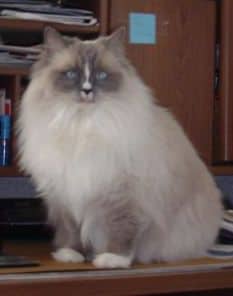 About 10 years ago I had 2 cats . . . a tortie and a calico, both domestic shorthairs. A coworker, knowing that I loved cats, convinced me to adopt his 2 year old Blue Mitted Ragdoll because his newborn baby was having respiratory problems and they were advised to get rid of their cat and dog. Based on his assurances, I agreed . . . sight unseen.

The night he came to deliver her, my mouth literally fell open when I opened my door and saw her in his arms. She was the most beautiful cat I had ever seen. My other two cats had already been together for several years, so it was difficult for her to break into their clique, but they were older than her and when Cinnamon died at 16 years old, and months later Cameo died at age 17, Samantha was now the Queen. A couple of other cats came and went over the years, but Samantha remained the Queen.

Samantha loves to curl up in a bathroom sink, or will run into the bathroom and jump on the end of the tub and "tell" me to turn on the water so she can drink from it. She loves basking in the sun on a screened in deck or, now, in a leopard print playpen that I've gotten so they can be outside on the patio, totally enclosed, but able to enjoy the fresh air. 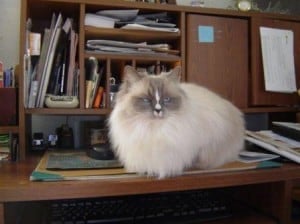 I knew nothing about Ragdolls until about 2 years ago when I realized that she was getting older and into the double digits. Reflecting on everything that she was and had been over the years I'd had her, I knew that I didn't ever want to be without a Ragdoll. Samantha wakes me every morning by licking my lips and then laying on my chest, almost face to face with me so I can pet the full length of her. When she's had enough, she leaves and knows that breakfast will soon be served.

I started researching the breed about 18 months ago and saw that everything I read about Ragdolls, she was. In January of this year I purchased another Blue Mitted female kitten and, while Samantha is a little too old to spend much time playing with a kitten and sharing any space on her throne, I do see her beginning to 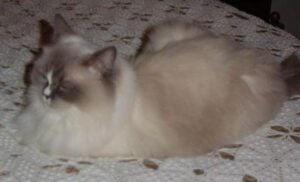 run around with Savanna more and more. I've very recently thrown a third one into the mix when I adopted a hermaphrodite Ragdoll that I found on Craig's List, but Sebastian is still laying low until he becomes comfortable with his new home.

I hope that by the end of the year Samantha, Savanna and Sebastian will have become comfortable enough with each other to be regular playmates. 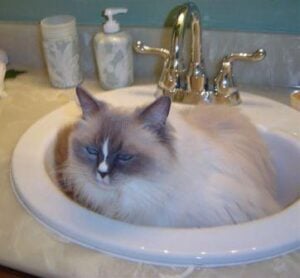 Samantha in a sink