I adopted Simon when he was 3 and a half months old. He is currently 4 years old and lives with 2 Ragdolls and another rescue cat. 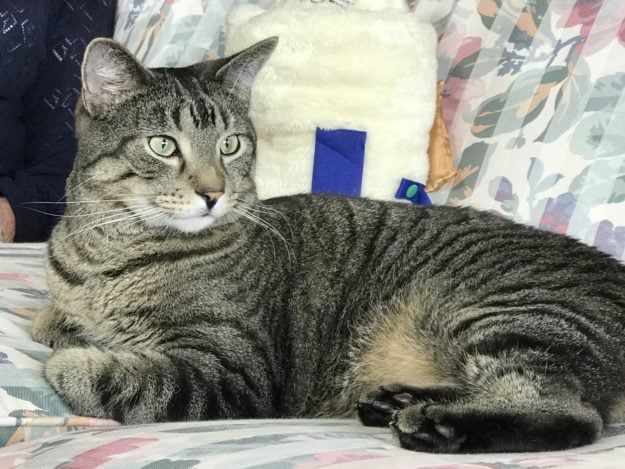 I had placed a deposit on a Ragdoll kitten and didn’t want the Ragdoll kitten to only have my 18-year-old calico cat to grow up with. Simon arrived at the house about 2 weeks ahead of my Ragdoll, Emma. 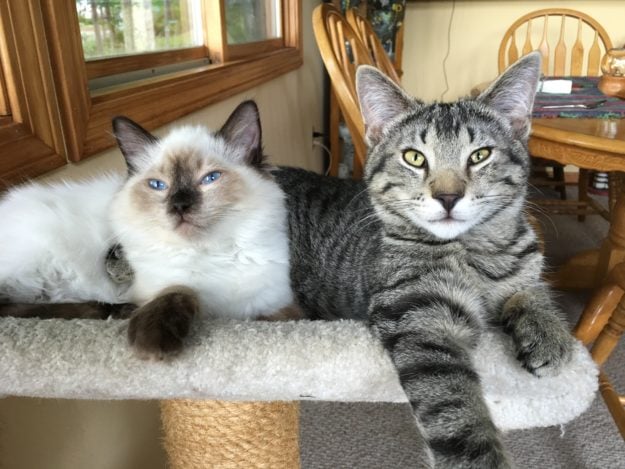 Simon is a mackerel tabby. He came from a hoarding house that had many cats and kittens. The rescuer suspected there was inbreeding going on in that house. One of his litter mates that had been adopted out, died of FIP. It’s not known about the health of any other cats that came from this house. 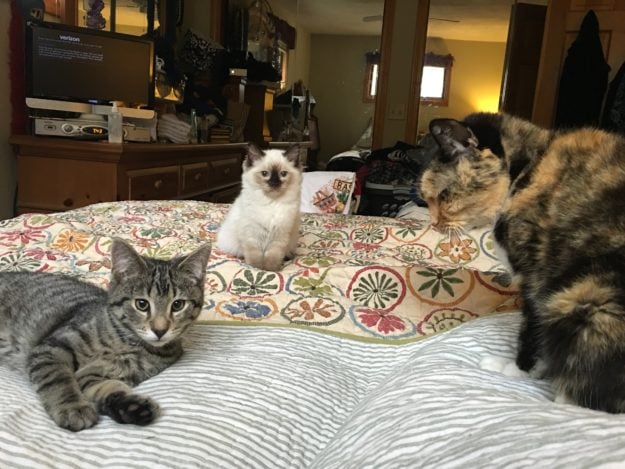 Simon has epilepsy. At age two, his seizures started. They were violent, grand mal, fully body thrashing type seizures. I brought him to the emergency 24-hour vet practice who ran all kinds of tests and could only come up with “idiopathic epilepsy”, which basically means they didn't know why the seizures were occurring. He even had a seizure while he was there being evaluated.

His seizures began occurring closer together. Initially they were every other month. He was put on an anti-seizure medication, phenobarbital, once the seizures were occurring less than monthly. 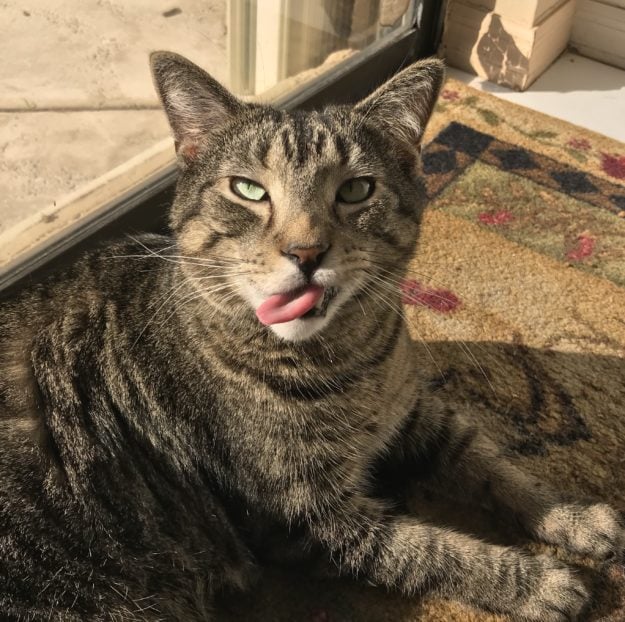 The phenobarbital was short lived however, as he developed a life-threatening adverse reaction (pseudo lymphoma) to the medication after being on it for just 3 weeks. He became very lethargic. He would only move about 5 feet over an entire day, and hid under the furniture.

He became anemic to the point of being just on the edge of requiring a blood transfusion. His gums turned the same pale color as his white teeth. He became anorexic. He totally stopped eating and had to be forced fed. He developed the tell-tale two pea sized lumps of a pseudo lymphoma on his neck. 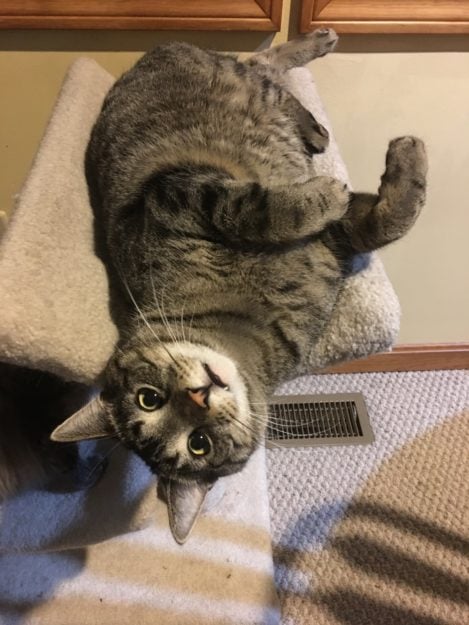 Once the medication was stopped, it took 10 days for it to clear his system and for him to return to his normal level of function. I was very happy the day he had enough energy to catch a mouse!

He’s about 14 pounds and since the CBD is for seizure control, I give him 7 drops (3.5 mg) mixed in to his wet food nightly.  I buy it online from Lazarus Naturals. That would have been very difficult to manage as I was away from the house for 11 hours a day on work days. I had read about ketogenic diets and CBD oil having some good effects on controlling seizures in cats anecdotally. I also had nothing to lose. The phenobarbital was no longer an option for him. 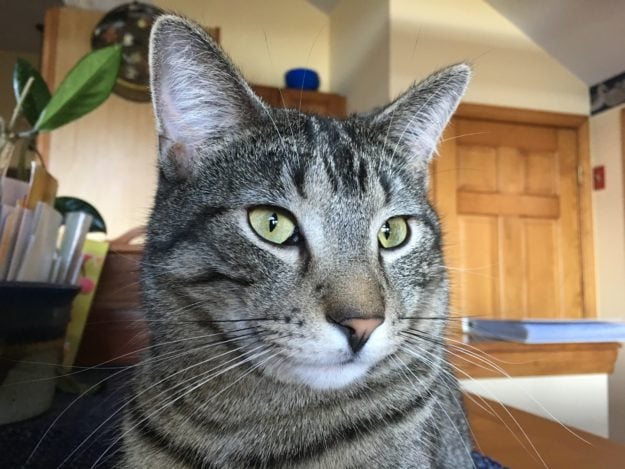 Fortunately, this diet change seems to be having a good effect on him since he has only had 1 seizure over the past 16 months. This one seizure was likely triggered by stress. It occurred after a long car ride to the veterinarian. He started seizing once entering their office. 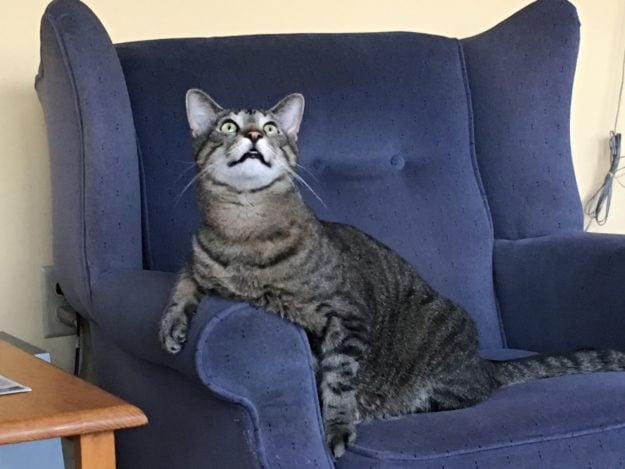 Simon is the dominant male in the house. If I call any cat, he comes running to check out what is going on. He has first dibs on food put down. He will gobble down his dish first and then push Emma away from hers and eat the rest of her food.

Emma doesn’t really mind though because her appetite isn’t as big as his is. By the time he finishes his dish, she has just about been satisfied with the amount of food she’s already consumed.

My rescue cat Sylvia likes to play fetch. Simon likes to interrupt her play so she can’t bring the toy back. He runs after the toy and blocks her from retrieving it. Even though he is neutered, he occasionally reminds Sylvia that he is the dominant cat. 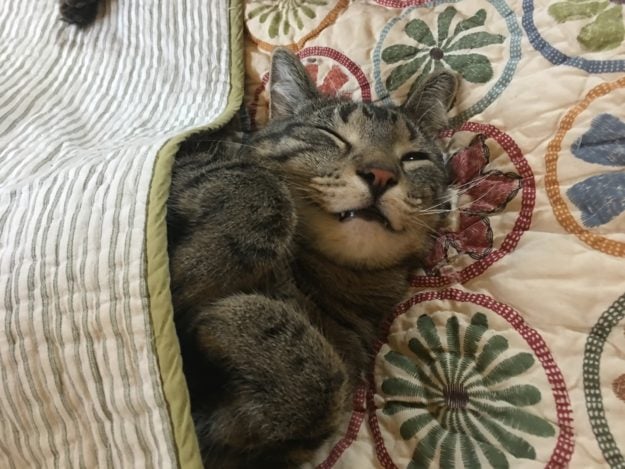 I get a little satisfaction when Uncle Everett, my male Ragdoll, chases Simon around the house after the way Simon treats the female cats.

He is an excellent mouser for an indoor cat. In that respect, he makes a positive contribution to the household. He has very quick reflexes.

Simon’s favorite things are to sit in the window and look outside, and to watch bird videos on his iPad. He also prefers drinking water out of his cat fountain.

My son has nicknamed him “bitey scratchy”. Simon is big, strong, and muscular. If Simon doesn’t want you to hold him, he lets you know! 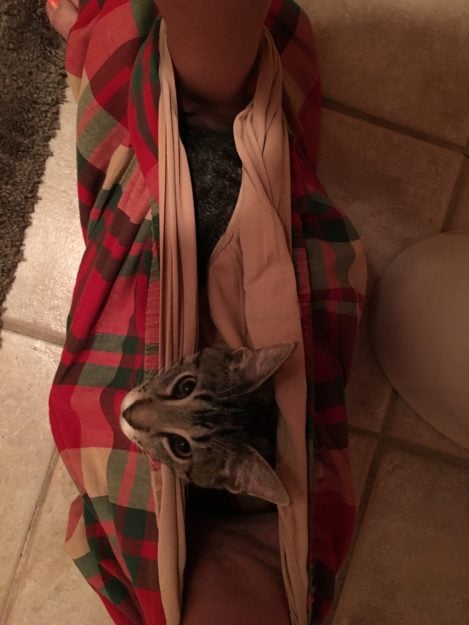 Simon is a great therapy cat. My 86-year-old mother lives with us. Oddly, he is very patient and loving with her. She says that he is her favorite cat and that he reminds her of the cats she had growing up.