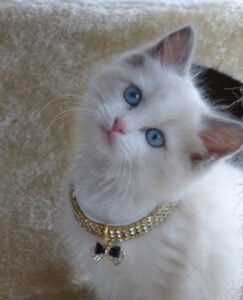 I got my Ragdoll Kitten from Ragmeister Ragdolls online, she was 9 weeks old when she flew into Seattle from San Diego.  She was born on Nov. 7, 2012.  Yes, I would highly recommend them, as their kittens have great personalities and are just beautiful!! 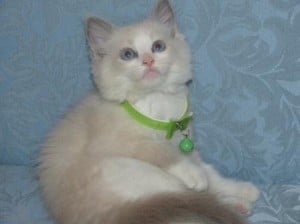 decided there & then, that when I got a cat, it would have to be a Ragdoll.  My husband said no, that he wanted us to travel and we already had a Golden Retriever puppy.  I read up on the Ragdoll, ordered books & looked them up on web sites & found out about the many different colors & patterns that were available.

A few months ago I put in an order for a Blue Bicolor Ragdoll Kitten, I put down the money & my Ragdoll just flew in to Seattle on January 9.  I had a name all picked out for her, “OCEAN BLUE”, her full name is “Ragmeister’s Ocean Blue” I thought that her name went well with River, after I saw the name on a Ragdoll site. I was so excited, I just couldn’t wait to see & hold her; I had already seen 2 beautiful photos of her.  There she was, at cargo in a beautiful green crate, she was stunning!!!! 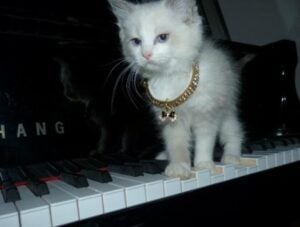 We brought her home & she was a little shy, & still scared from the loud airplanes, & she had 2 flights, she was so tired, her little head went backwards, and she closed her eyes, it was so funny.  That night, she was playing, & putting on a show for me, flipping over and standing on her back legs 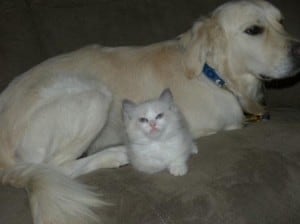 & jumping around!!  She was so much fun!!!  A few days later, I slowly introduced her to “RIVER” our English Cream Golden Retriever, who has lots of energy.  At first, she hissed at him, & he felt so badly, he kept pacing back & forth, peering at Ocean from the side of his eye, he didn’t want her to see him looking at her. Then a few days later, River was lying on the couch, very tired, & Ocean was asleep on my lap, so I put Ocean next to River & got a sweet photo of the 2 of them.  I think they will be great friends very soon.  Every day River lays next to me & Ocean on the couch & they sniff each other. 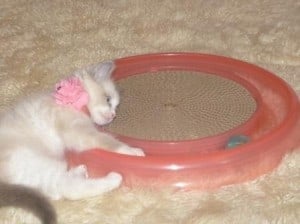 Ocean only weighs 1 lb. 13 oz., she is quite tiny, but beautiful & she has the most beautiful blue eyes, as Ragdolls are supposed to have!!!  I just love her & am enjoying her so much!!! I never know what she will do next; yesterday she dove into the empty trash can & popped up, jumped out & took off running, did some flips & slid under my chair with a skirt around it.  I thought she had had some catnip from one of her toys, as I had never seen her so active.  She was just having a ball, entertaining 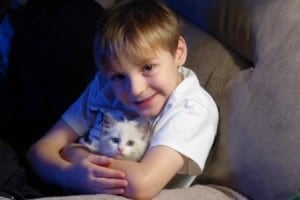 herself, & me!!!  I was thinking about how much fun it would be to have 2 of them, but I’m lucky that my husband agreed to let me have one.  He has also been enjoying her, & a few days ago our 4 little grandsons came over to see her for the very first time.  As soon as they came into where she was, she took off & did a flip in the box, & they were just so amused by her.  They all got to take turns holding her and playing with her.  One of them, I think it was Adam who put Ocean on my Baby Grande Piano & she started walking on the piano keys making a melody, then Stephen, 3 ½, also put her on the piano, because he likes to follow what his big brothers do. Stephen said he wants a kitty like mine, & when I asked him what he would name his kitty, he said, “JOE”, children are so refreshing at that age.  He gave Ocean the sweetest little hug, then he ran off to play with River. 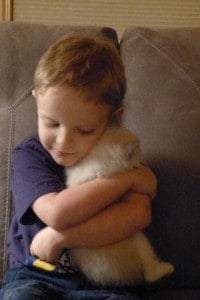 Ocean’s favorite toy is the “Cat Dancer,” she just loves it!!!!  She also loves her Skinneeez  Mouse for cats, it is brown, & flat with a skinny tail.  Ocean picks it up & runs with it in her mouth, flips it in the air & holds it & kicks it with her back paws.  She also loves her pink Bergan Turbo Cat Scratcher!  She likes to sleep on her blue hammock in her Kitty Condo.