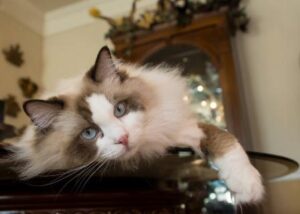 Linus the BeefcakeA little baby brother was born on August 25, 2011. A cute little seal bi-color Ragdoll kitten. The addiction had already started after I fell head over heels for my first Ragdoll, Newman. You know, there is a saying that you just can’t have one Ragdoll and I’m living proof that it’s completely true! Once you bring one of these little darlings into your home you really and truly become addicted to their purrsonalities and crave more of their companionship. Their plush fur, fluffy little ruffs and innocent blue eyes just steal your heart away before you even know it’s gone! 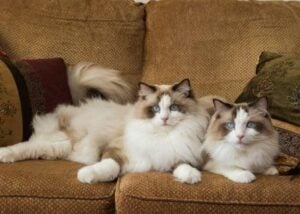 Now, those of us who are Ragdoll admirers all have our favorite patterns and colors.  For me, I wanted a bi-color kitten, preferably a seal. Nothing else was going to satisfy me! After getting my feet wet with Newman, it wasn’t long before I got wind that my breeder had another litter on the way.  I felt like a momma hen waiting for her chickadees to hatch! Does the time ever pass slower when you are waiting for something awesome? When I saw the precious little “baby” pics I knew it was meant to be. He had a charming and sincere, sweet face that just melted my heart. So it was quickly settled that this little boy had to come down to Georgia to hang with his big brother and other kitty siblings. 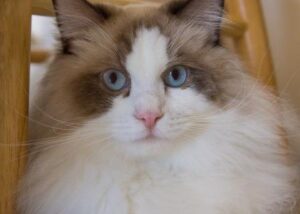 You would think that after going through the naming process once before that I would have had a list of favorite names that I could pick from, but again, I struggled with a name for this little fella.  I wanted something different and again, thought I would let his purrsonality dictate the name.  Little brother gave me the impression of being a little more needy and his wimpy little “mew” made me think of the Peanuts gang. So the name “Linus” struck a chord and on his CFA papers he’s known as Sir Linus Fluffingham of BeCharmed Ragdolls.  He’s quite the dapper little guy and ironically for being a little brother he’s a few pounds heavier than Newman and has earned the nickname “Beefcake”.  He’s got a lot more fluff and a big plushy ruff that I can’t keep my hands off of.  He’s my cuddly snuggly baby and I couldn’t possibly love him any more than I already do. 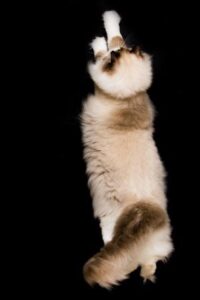 Again, Linus is the epitome of the breed. He’ll be 2 years old this year and he’s still just as playful, yet docile and sweet natured as ever. Not a mean bone in his body and I’ve never heard him hiss at anyone or anything. It’s amazing that even though he’s from a different litter, he has very similar markings to Newman and some can’t tell them apart. But of course mama can, haha. Linus has two “sleeves” and Newman only has one. Plus he’s got a fluffier coat than big brother.  He has a very sweet and soft meow and when it comes to cuddle time he climbs right up on the bed and butts his head against my hand or cheek and demands to be petted and snuggled.  No one loves food more than this guy and he’s always the first to head towards the kitchen when it’s snack time.  I even caught him in my bowl of raviolis once when I walked off for a moment!! Like Newman, his favorite toy is “Da Bird” but he prefers the kitty hammock cat-napper that’s in the window sill instead of the cat tower. He gets what I call the “crazy eye” when he’s in the mood for play and he lets out a yowling meow and darts through the house like something is chasing him when all of us are just sitting around and relaxing. 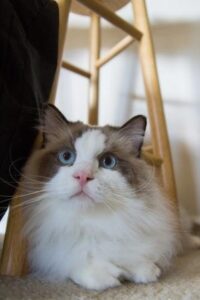 Again, if you are considering a Ragdoll don’t hesitate!  They are truly a wonderful breed and are one of the most beautiful examples of the feline species you can have as a pet. Mine adapted so well that you would honestly think they were born in my home. They are very kind, very patient and extremely easy going creatures that will capture your attention and your heart like no other kitties. The best advice I could give to someone considering adopting one of these beauties would be to do the research on breeders in your area and make a list of questions. Don’t ever settle or be pressured to adopt from a breeder! And remember, once you bring your first raggie home, it probably won’t be your last!Photos courtesy of Lee Burns