Kona - Ragdoll of the Week 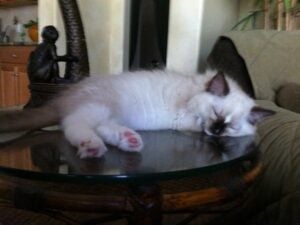 Kona’s life began in a cattery in west central Florida on July 15, 2013. He was seal-point-mitted with the most beautiful cream colored fur that was as soft as a rabbit. He was adorned with a beautiful white blaze that looked like a star on his forehead. His beautiful, clear blue eyes were unmistakably the window to his soul that spoke volumes to me during his life.I can remember his first day with us like it was yesterday. Our previous cat had passed away at 16 years of age just months before and I had to “kitten proof” the house that morning. Shopping the day before for his arrival was both exciting and scary as I had to prepare for a tiny kitten who would most likely be scared and stressed being away from everything that he knew. I was used to an older cat, that slept many hours, ate prescription food, liked a certain type litter and had a routine about him that was predictable. Here I was, taking in this beautiful young life that needed love and attention just like a newborn child would. I was terrified, yet could not wait to take him home and hopefully have a new companion for many years to come.

Kona was all and more that my family and I could ever hope or ask for. He pranced around, sniffed and investigated all that he could that first day. He played with the few toys I had bought, hoping that he would love them. We laughed at how he would be so energetic one minute and then just jump on a chair and fall fast asleep in seconds. His innocence and energy were priceless and so was the joy that he brought to us.Kona grew in size, his colors darkened, and he loved us as much as we loved him. He loved to play and if any of us seemed to be ignoring him he would nip at our ankles and give us that “hey, its time to play” look. He did what all kittens do, which I think we all love to watch…he would run at what seemed like 100 miles an hour all around, jumping on everything in his path, coming to rest at my feet and looking at me with those blue eyes that told me how happy he was. That feeling was mutual. I could not help but smile, knowing that his being with us was meant to be. 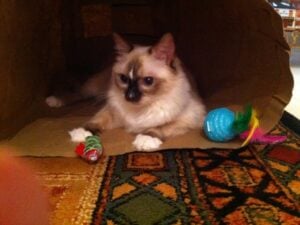 When the time came, Kona was neutered, and was well adjusted and happy. He had his own little routines, certain places that he loved to nap, or sit and watch the squirrels and other critters common to Florida. The squirrels would mesmerize him. He loved watching them climbing the trees, jumping from branch to branch and chasing each other. I think they saw him too, as they would come close to the window and almost taunt him, daring him to come out and play! Oh, and I bet he would have given them a good run, if he had the chance.Life with Kona was easy and comfortable. We knew what he loved to do, we knew what he loved to eat and we knew that he loved us as much as we loved him. He fit easily into our lifestyle and he seemed to be thriving. Seemed, being the operative word here….because one day, our lives changed forever. We never saw it coming…like a lightning bolt from the sky, hitting us with such force, throwing us off our feet. We were in for some difficult days ahead. His eyes told me so. 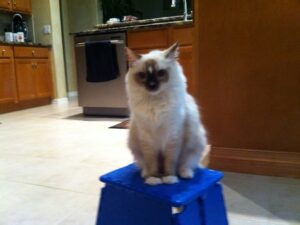 It all began on an ordinary day in May of 2014. Kona was 10 months young. He had been napping a lot recently but on this particular day he had gotten up from his nap and came to where I was sitting, and I knew something was wrong. He seemed weary, bringing his face to mine, almost asking me to notice. I did. His third eyelid was covering at least 1/4 of his eyes. He looked cross eyed and I panicked. Within a half an hour we were we at the vet, never thinking that the next few days would prove to be the beginning of a very difficult time for all of us. Kona was in a fight for his life. We were all in a fight for his life.Only days later at the Internal Specialist, Kona was given a death sentence, an expiration date of only weeks or a month at the most…Kona had FIP, Feline Infectious Peritonitis. It presents in both a wet and dry form. Kona had the dry form. FIP has no cure, is not widely known, but takes the lives of mostly young kittens under the age of 1, who were exposed to the FCoV Virus. The virus is prevalent in catteries, shelters and multi-cat environments. 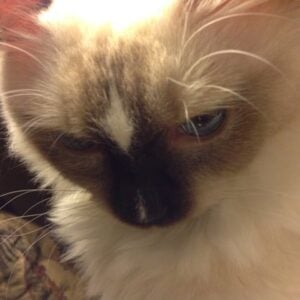 Everything changed that day. I was given some steroids and some meds to help his appetite. I walked out with Kona in his carrier, drowsy from drugs, shaved and sore from the needle biopsies and a sonogram, and me with tears streaming down my face, not knowing what to do. I was devastated, not believing that this was his fate, not believing that this was all the life he would have, not knowing whether there was something, anything that I could do to make this all go away…looking hard for some hope through the tears.The drive home was blur, but I remember talking to him the whole way, telling him how much I loved him and that no matter what, I would do everything I could, as long as I could to help him through this. I had to… for him and for us. We needed him as much as he needed us. We would not let each other down. Kona did not let us down, not for a minute, not for a second.We found out more about a treatment for dry FIP called PI, Polyprennyl Immunostimulant. It is an immune booster and we tried it for awhile. There was no change in his condition and so we decided to stick with the steroids and other meds, including pain relievers. He had some very good days, where he was a kitten again for a month or so. 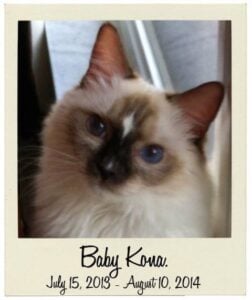 His good days were great. He would run and jump and gallop like old times. He seemed to want to please us, and he did, time and time again. He was a silly boy who loved just about everything and we did what we could to encourage his playfulness. But then he started to decline. His appetite dwindled, his playfulness was for very short periods and his nap time increased more and more each day. We tried doubling the steroids and pain meds in hopes that this would help but it did not. He did celebrate his first birthday with us on July 15, 2014 and he was still having some great moments where he craved affection and seemed like he was rebounding….but they were only moments, not hours, not days any more.I was calling the vet almost daily looking for advice, knowing that he was failing quickly. He could no longer walk to the litterbox in the laundry room, so I set one up close to his bed where he spent most of the day. I had to entice him to eat by hand-feeding him. Sometimes he would make the walk to his food and water, but he would mostly eat a few morsels from my hand and then put his head back down and close his eyes. I tried everything to make him eat… he was just not hungry any more. His quality of life was gone and I knew he needed to be helped to the Rainbow Bridge.So, on Sunday, August 10, 2014 Kona left us and started his journey to the Bridge. I held him for a long time and before that final injection, he made a soft meow, saying goodbye, leaving the weight of his pain in my arms for me to carry now. To this day, almost one year later, I can still vividly remember everything about that day. The softness of his hair, his scent, his eyes that had lost their brilliance and light, still haunt me as I had to play God that day.Would he ever forgive me… could I forgive myself? I pray that he has, although, I still carry that guilt… the not knowing. But deep down, although he could not speak to me, his eyes told me he was tired and needed eternal rest. Run free Baby Kona… may the wings of Angels hold you and guide you… ‘till we meet again… you will always be in our hearts. We love you and miss you every day.

As I am not an expert on FIP, I will leave the education of it up to the experts. Please go to dr-addie.com to read about the disease and how it is contracted. There are certain institutions and universities that are currently researching the disease and have made great strides in hopefully one day finding a cure. The Winn Feline Foundation, specifically, the Bria Fund, fund the doctors who do this research.Through the sales of his book, Kona’s Fight, Tiny Kitten, Big Heart, available on Kindle and i-books have given us the opportunity to sponsor two FIP studies through the Bria Fund at the Winn Feline Foundation. One being done at Cornell University and the other at the University of TN in hopes of one day finding a cure to FIP.I promised Kona that I would continue to fight for him and all the other kittens taken by this horrible disease and I will continue to do that.Do you have a Ragdoll Kitten or Cat?  Consider submitting your kitty!  Ragdoll of the Week submission guidelines