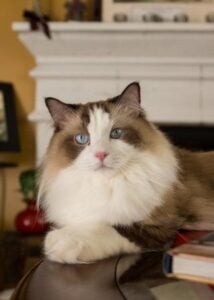 The Kitty with Raccoon Eyes

He was born on October 21, 2010. He is a Seal Bi-Color Ragdoll. His name is Newman. Blue eyes, pink nose, bunny-soft fur, long and curly whiskers, a dashing purrsonality to die for: who wouldn’t swoon??

My adoration for the breed began when I had a subscription to Cat Fancy magazine. I loved the look of these kitties with “raccoon looking eyes”. Those “raccoon eyes” are known as the bi-color pattern and I have always admired them from afar. In 2010 I was lucky enough to welcome one of these beautiful, sweet and loving little creatures into my home. I travelled nearly 600 miles to pick up my newest family member and I couldn’t have been happier! I searched and searched for the purrfect kitty and I had actually placed two deposits on two other kittens, but as they say, the third time is the “charm” and I happened upon BeCharmed Ragdolls’ website where I found my baby! I immediately fell in love with “Jack Frost”, a seal-bicolor boy waiting for his furever home. I brought him home when he was nearly 16 weeks old and was at a loss for a name. Did I want a regal name? Did I want something cute? I couldn’t decide and thought I’d let his purrsonality dictate his name. Half goofball and half sweetheart I finally settled on “Newman”. It served a dual purpose: a somewhat distinguished name and he truly was the new man in my life, ha! Newman bonded with my other two kitties right away and had no trouble fitting in and stealing my heart away. 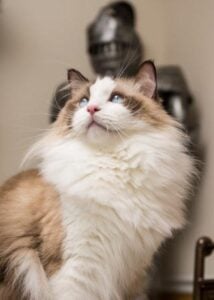 Newman is special because for me, he epitomizes all that a Ragdoll is. He is docile, gentle and extremely sweet-natured. He’s very well behaved and is extremely loyal and loving. And best of all, I think he is the most handsome seal bi-color Ragdoll I’ve ever laid eyes on! It’s been wonderful watching him grow and see his color darken as he gets older. He’s a goofball and playful and has the cutest meow and this quirky little purr/meow/growl when he gets frisky. He has silly a habit of bringing his furry mice toys to bed and he likes to do what I call a kitty “bum rush”. If I’m leaning over the bathroom sink or bending over to pick up something off the floor he comes running up behind me and jumps up to tap me on the behind with his paws and takes off like a lunatic. It’s hilarious because I never know when he’s going to “attack”. His favorite toy is “Da Bird” and he enjoys napping on the top spot of the cat tower. Yes, he’s claimed his rightful spot on top of the “throne”. Newman will be 3 years old in October and it’s been such a dream come true to own a Ragdoll. From his adorable pink nose to his long curly whiskers, Newman is the king of the house and I tell him so every day. 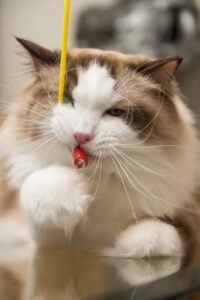 Ragdolls encompass everything I had ever hoped for in a kitty. They are extremely well adapted, very loving and sweet, docile and gentle and above all else – EXQUISITELY BEAUTIFUL. If you were ever unsure about adopting a Ragdoll or “raggie” as us owners affectionately call them, all I can say is that they are truly a one of a kind cat. My advice would be to do your research on the breeder and don’t be afraid to ask questions! I searched for about 9 months before I found my Newman. I knew I had picked the right breeder when we exchanged 4 and 5 paragraph emails back and forth. I fell so deeply in love with Newman that I adopted another kitten from the same breeder and it’s amazing how much they look alike even though they are from different litters. Baby brother is a little chunkier than big brother, but we won’t hold that against him! Don’t you need a kitty with raccoon eyes too? 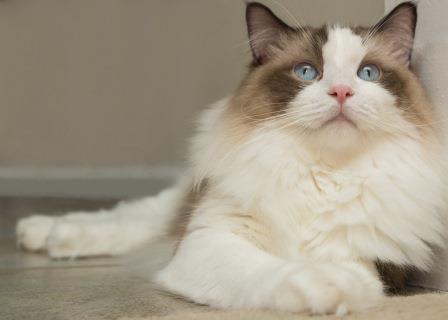 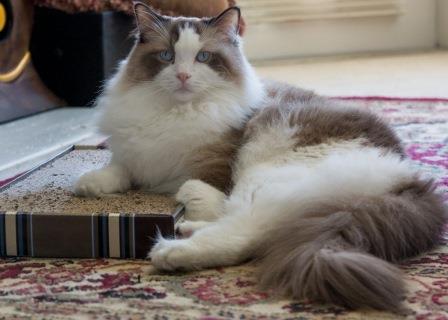