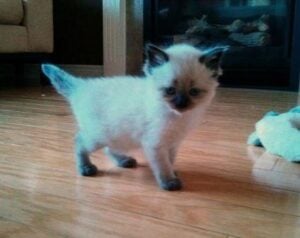 I got Leo from a small cattery. He was nicknamed Tiny, as he was the smallest of the litter. I purchased him when he was just a few weeks old, and got lots of photos of him emailed to me as he grew. I couldn’t help but fall in love with him. He seemed to really love the camera.

Finally, when he was 16 weeks old, I was able to bring him home. He had come from a house full of people and other pets, so arriving out my apartment where I lived alone with Lily was a little strange for him at first. (Not to mention that Lily had NO idea what to make of him!) Within a few days, he and Lily became the best of friends, and our lives have never been the same since!

Leo is a talker. Every day starts with a long conversation about what I missed while I was asleep, and an inquiry concerning how I slept. (This is, of course, only my interpretation, but if you could hear him too, 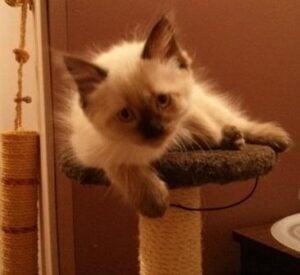 you’d swear that it’s true!) He then asks for breakfast. Later in the day, he asks me to telephone my Dad. He then proceeds to have a chat with my Dad. My Dad real kick out of his chattiness and meows at Leo on the phone – they seem to “talk” for some time!

Tired from all the chatter, Leo usually takes a nap after the phone call, but does ask for some pets and cuddles in the evening. He has attempted to chat with Lily, but she’s just not interested.

He’s a curious fellow, and absolutely to play. He also loves water. Whenever I have water running, he has to come and investigate. He hasn’t fallen into the tub yet, but I imagine that it’s only a matter of time, since he stands on the side and plays in the water as it’s filling up!

Needless to say, I love my little Leo. Because I live alone, it is especially heartwarming to have him chat with me every day. He has grown into a very affectionate kitty, and his chatter is endearing. He loves to sit next to me in the evenings when we watch TV. He sometimes puts his head in my lap, or stretches one paw out so he is touching my arm.

I didn’t know this would happen at the time, but he’s also grown into his name! I picked the name Leo because I thought it went along well with Lily, but I had no idea that his fur would turn out the way it did! As you can see from the pictures, he has developed quite a ruff of fur around his neck. King of cats indeed! 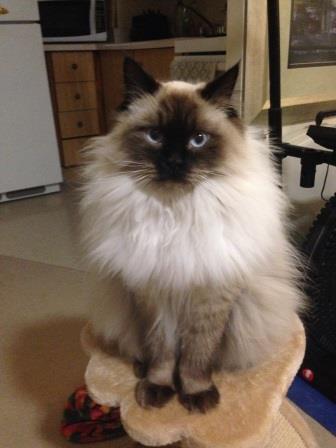 6 thoughts on “Leo – Ragdoll of the Week”