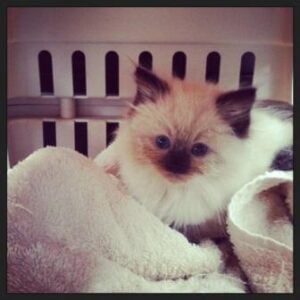 I became interested in Ragdolls when I saw one of Jenny’s videos on Youtube.com. I saw how adorable and big these cats are and thought I would really like one. Then I started doing research on Ragdolls and what type of personality do they have. I fell in love instantly and said “this is the cat for me.

The reason why I wanted a Ragdoll so bad was that a week before my birthday we had to put down my dog for old age and health problems. I had my dog Buster for 15 years; he was my pre-kinder present. I was an only child and hardly had friends and needed some companionship and a little red dachshund was the one for me. After 15 years with him by my side I had to say goodbye to him on September of this year. I kept saying that I wanted another pet but not a dog because I couldn’t replace Buster and it wouldn’t be fair to the new dog because I would be trying to compare him to my Buster. Then I remembered the cute adorable Ragdolls from Youtube.com and thought “Oh my god! That would be a great pet for me!” I spoke to my parents and they agreed to give me a Ragdoll Kitten as a graduation present for my College Graduation. I started doing research for potential breeders around October of last year and made a list of a couple of local breeders that I liked. I got my kitten from a breeder named Kim from Austin Farm Cattery. It was a nice place and had the color patterns that I want as well as a good price range. She had a lot of years of experience breeding Rags. 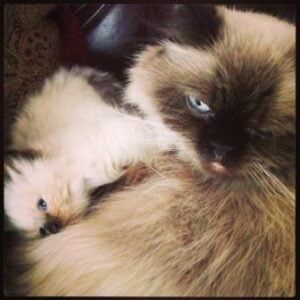 Mozart a.k.a Momo got his name because I loved the name Momo from a childhood tv show I used to watch based from Japan. Momo means peach in Japanese. I also wanted to follow the tradition of getting my pets name from childhood tv shows because Buster got his name from a show I used to watch when I was a child and in honor of his memory I wanted to do the same for my future pets. But I decided to officially name him Mozart because I wanted him to have an elegant name, but also have meaning to me. Mozart has meaning to me because for 8 year of my childhood I played piano and my favorite composer was Wolfgang Amadeus Mozart. I thought Momo would be a cute nickname for Mozart which fit the name. 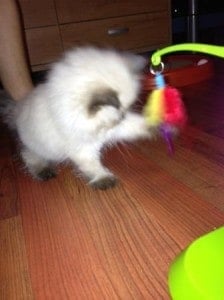 Mozart was born May 14, 2013. Momo loves to meow a lot, I mean A LOT! He is definitely a talker. Or spend his day being babysat by our rescued Himalayan Kitty. As soon as they meet they hit it off since she adapted a mommy attitude to him. He loves playing with his toys or chasing a red laser I have. He also loves to fall asleep on your chest, mostly my mom’s. He loves his wet food like crazy and always wants to eat but we make sure that he doesn’t over it. Since Momo is new to our home and still a little kitten he hasn’t been able to venture out with different types of food as well as toys. He does love feather toys like crazy.

Below is a link to a couple of Youtube videos I just uploaded of him. 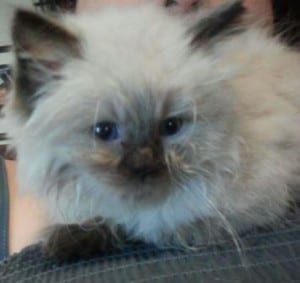