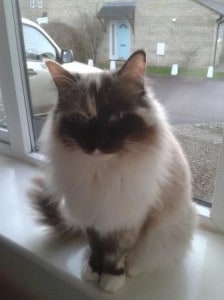 I would like to introduce Mimi, our new-to-us Ragdoll.

Mimi is 13 months old, and is a Seal Tortie Point Mitted Ragdoll neutered girlie.  She is a fairly small Ragdoll, I think, as she only weighs seven and a half pounds.  However, having done quite a bit of reading, I hope she will grow some more over the next year or so!

We have had Mimi for three weeks now, and rehomed her from a family whose youngest little boy had sadly developed an allergy to cats.  She didn’t come with any papers, but that doesn’t matter to us.  Her previous 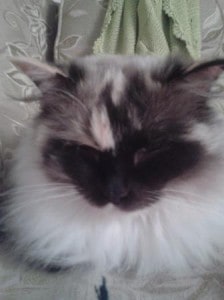 owners had named her Mimi, and she responded to it when called and spoken to, so we decided to keep the name.

We lost our much-loved terrier dog, Jim, in January to renal failure at nearly fourteen years of age, and we had decided not to have any more pets for a few months – but – oh, the emptiness of the house!  We decided to have a cat this time, but only the one, to be company for me as I am at home as a Domestic Goddess/Housewife all day.

We were introduced to the Ragdoll breed by our neighbour, who has two cats, one of which is a very large Ragdoll Seal Point boy named Maximus, and he is just gorgeous! 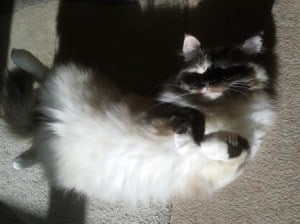 Our neighbour told us all about the breed and their endearing traits, and to have a cat which acts a bit like a dog seemed ideal.  We have rehomed many of our past pets from shelters, so this time we decided to compromise and go for a Ragdoll, but to rehome one.  I looked at the websites of local rescue centres and then at private adverts by owners looking for new homes for their Ragdoll for genuine reasons. 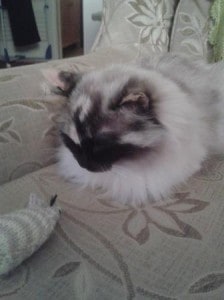 I made contact with her owners, finding out all that I needed to know, and drove the fifty miles to fetch her.  She miaowed pitifully all the way to her new home with us from the security of her pet carrier, but I kept chatting to her and put the car radio on quietly for some background noise.

Mimi spent the first couple of nights shunning her beautiful squishy, poofy bed that I had lovingly chosen for her, and slept under the spare bed, but gradually she began to feel more at home and after a week or so decided that the only place to sleep at night is on my pillow, just above my head.  If she feels a little 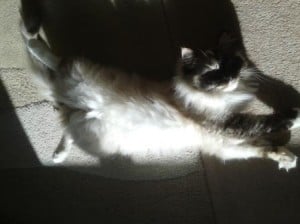 chilly, she dives down under our duvet (which is constructed from sheep wool inside a pure cotton cover – so allows a bit more air in than synthetic duvets!) and turns round so that her head is peeping up between us.

She loves sharpening her claws on her scratching posts, chasing a tinkly ball and savaging a small knitted catnip-filled mouse that my elder daughter bought from a Cats Protection 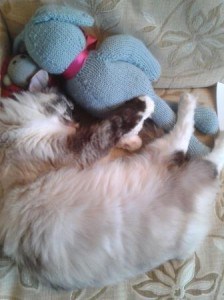 charity stall.  She follows me around the house and “chats” to me whilst watching me from the kitchen table.  She has wet food for breakfast and supper, with a small amount of Royal Canin Ragdoll dry food to nibble during the day.

She has settled beautifully, and delights me every day with her antics and her loving, affectionate nature.  She doesn’t often sit on my lap, but likes to drape herself along the back of the sofa behind my head or to snuggle up next to me or cuddle the two resident stuffed toys that are in our living room!

UPDATE: We have had Mimi for three-and-a-half weeks now, and are so glad that she has come to share our lives.  But…… on Saturday, our “spayed” cat came into season.  Whether or not the people who sold her to us as “spayed” were unsure, naively optimistic or worse, I don’t know.  It makes no difference in that Mimi has happily found her “forever” home here with us, and she will be off to see Auntie or Uncle Vet for spaying as soon as she has stopped calling and waving herself around!

So although this update is a bit depressing, I just wanted to advise anyone getting a cat for rehoming from a private advert, to sit on your excitement, make a list of all the questions you have regarding the cat’s history, both ownership-wise and medically, and ask, ask and ask again until you get the answers you are happy with.  If necessary, ask for the name of the vets your sellers used for the cat so your vets can make contact with them if there is a problem.