I would like everyone to meet my Bi-colour Ragdoll; Milo! 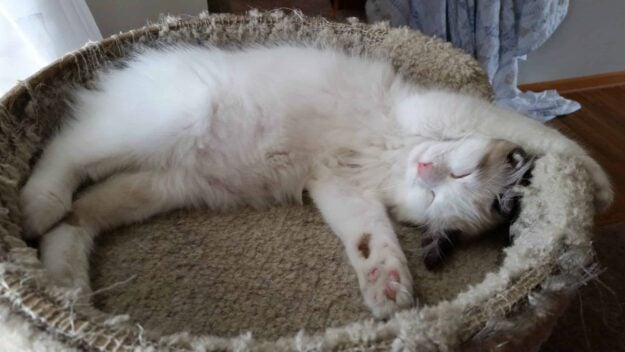 Milo was born to a breeder in Southern Indiana who was new to breeding cats (although she was a long time breeder of pure-bred dogs). Staying with his mother and father until he was nine weeks old, Milo was more than I could have ever dreamed of.

Before Milo, I had adopted a kitten from a shelter at the age of 8. Her name was Angel, and she was with me for nearly 14 years. Having her from Elementary school and into college, I grew up with and learned more from Angel than I could have ever dreamed. I learned responsibility, empathy, and a strong work ethic through my time with her. She was my constant and loving companion through all her years. Losing her during my first week of school in my 4th year of college was devastating. Finding out that I needed to stay in college longer in order to graduate, my parent’s divorce, moving twice, and having her death on top of that set the stage for a major relapse in my depression. 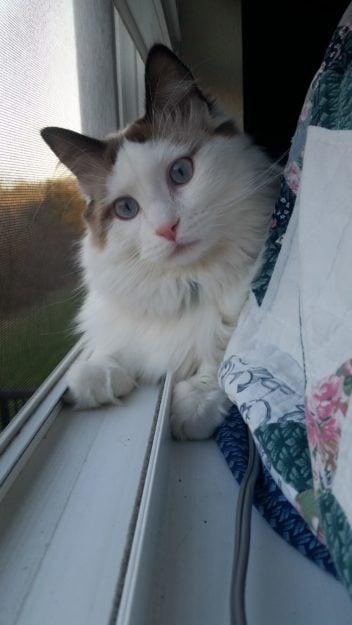 A year after Angel’s death, I found myself in a proper situation to care for a cat. Living in an apartment away from the noise and chaos of campus, and my depression starting to slowly come under some control, I decided to take in my brother’s cat. Honey, a fat calico, helped me to get back into cat care again and made me realize that while I still missed Angel terribly, I also missed having a feline companion I could call my own. After talking to my therapist and my doctor, as well as some serious soul searching on the issue, I decided that I was ready for a kitten. But not just any kitten! I wanted a kitten that I could connect with; a kitten that I could feel a real bond with from the moment we met, just like I had with Angel. After getting a prescription and permission to have the kitten be brought in as a support animal for my depression and anxiety, I started my search. I did a lot of research and found that Ragdoll cats would make excellent support cats, so I was hoping to get one. However, if I happened to find ‘the one’ and they weren’t a Ragdoll, I was still going to love them and would be more than willing to adopt any kind of kitty to have that special bond again. And so my journey for cat number two began! 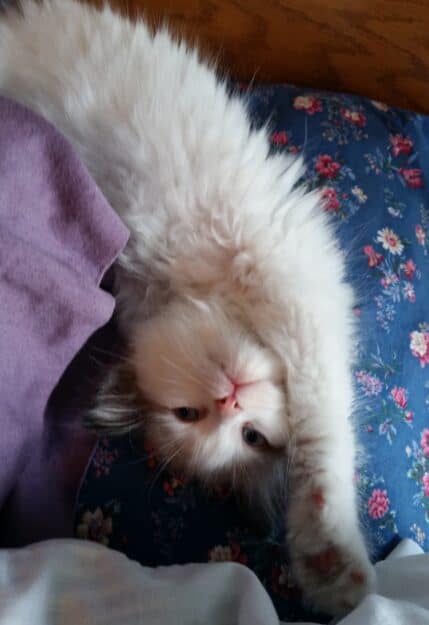 In the course of nearly 8 months, I was unable to get on a list for a potential kitten from a breeder, almost ended up in a bad situation due to trying to answer a Craig’s List ad, went to 6 shelters, 7 Petsmart, and 5 Pectco locations weekly to peruse potential adoptees, and dealt with the heart wrenching situation of being barred from adopting from a major humane society due to rules at my apartment complex (which I don’t even have to follow since the kitten would be a support animal as opposed to a pet). Still, I knew I couldn’t give up. I felt that finding the right kitten was my main mission in life; that it was the most important thing. Then, one night, my mother and I were both on our laptops (she was supposed to be working and I was supposed to be applying for a summer job) and we came across the same ad at the same time from two different sites; a classified ad for Ragdoll kittens ready for new homes about 2 hours south of us. After calling the woman and confirming there were still kittens, we decided to go the next day. And that day I met and brought home Milo. It was a crazy coincidence, and after nearly a year of searching it felt like fate. I knew Milo was the one the instant I held him. 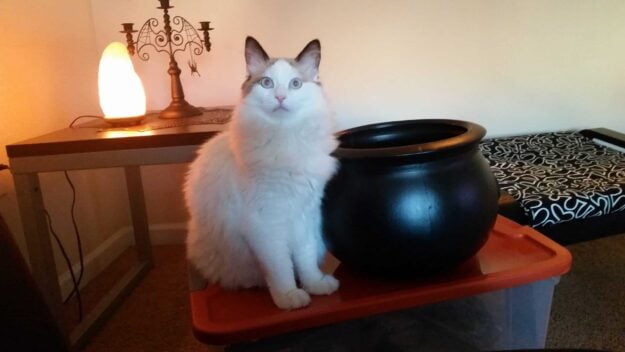 Milo is now just over a year old, celebrating his first birthday on April 2nd. Happy being the only cat in the apartment, Milo has tons of toys and gets all the attention. He loves soft fabric, catnip, feathers, string, and clicking at birds from the window. As for food he likes scrambled eggs, cucumbers, ice cubes, and salmon in addition to his regular wet and dry food. This winter I also found out he loves snow! I’m slowly getting him used to walking on a leash outdoors, but he seems more interested in laying in the sun than walking on the sidewalk. Sleeping beside me every night, playing in the shower every morning, and greeting me at the door when I come home from class have made him one of the most important and wonderful parts of my day. He helps me to remain calm on my bad days and makes my good days even better. I hope that I have many more years to enjoy his company! 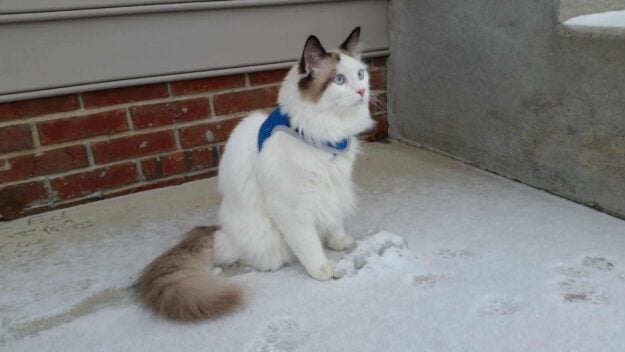