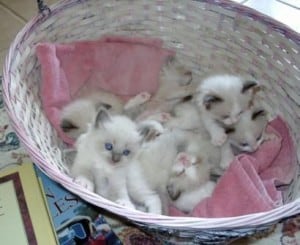 One day, my breeder friend called and asked if I would drive over soon and photograph a litter of eight ragdoll kittens for their 1st month birthday.  As it happened, I was able to get over there a few days earlier.  They were four weeks old when I did the first photo series.  There was one little blue mitted boy that kept following me with his eyes as I moved around to get better angles for pictures.  He would often try to get out of the basket.  His littermates all seemed content to stay in the basket and play or sleep.  But this little boy kept up his antics, determined to get my total attention.

I lifted him out and held him for a few minutes and he immediately went to sleep in my lap.  After a 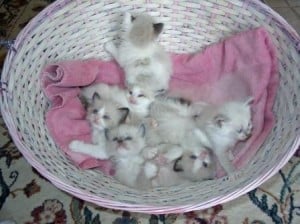 short nap, I put him back in the basket with his siblings.

Then, when these kittens were six weeks old, I returned to take more pictures.  His breeder had moved their nest into another room and, while she went to get some of the kittens for me, all of a sudden here comes this tiny blue streak, running as fast as his little legs would go, coming to meet me.  He heard my voice, ran down this long hallway and stopped at my feet, looked up into my eyes, and meowed to me.  Of course I couldn’t resist, so I picked him up and walked back to where his siblings were.  But, all afternoon, he wasn’t satisfied to be anywhere except with me. 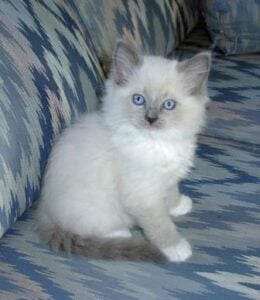 I was able to return when they were eight weeks old.  As I came in the front door, talking to the breeder friend, this little blue boy jumped off the cat tree and came running around the corner so fast his hind feet slipped out from under him.  Again, he got to my feet, stopped, looked up at me and spoke to me.  It was as if he was saying, “Where have you been?  I’ve been waiting for you.”

I got plenty of photos of him and his littermates that afternoon.  But, he was always there right by my feet.  After I was through taking pictures and sat down for a few minutes, he came over and climbed up my pants leg, settled himself in my lap and immediately went to sleep.  After about 30 minutes, his breeder smiled at me and said, “It looks like you’ve been bought and paid for by this little blue boy.”  Yes, he had stolen my heart.

And, because he was always wanting his picture taken, I named him Kodak Moment. 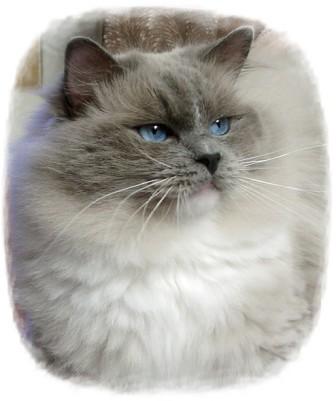 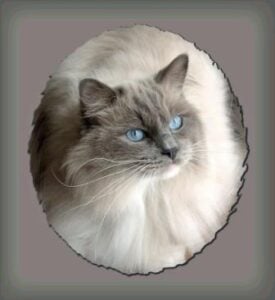 Kodak became a breeder boy for me.  Even though he only had a few litters for me, he did produce some of my favorite queens.  He made gorgeous kittens and they all had such beautiful, expressive, blue eyes.

Kodak was a great daddy to his kittens.  He loved to play with them and he would even lay down and let them pretend to nurse on him.  He and one daughter, Halle, were often seen like this.  Many times I have watched as Kodak would head butt Halle just enough to knock her down, then he would plop down beside her, with his tummy up, and she would start nursing on him.  All the while, his feet were kneading just like a mama cat does. 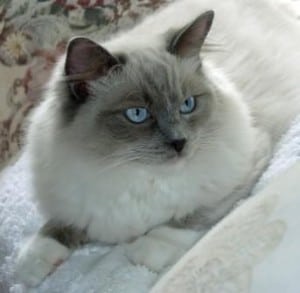 Kodak loves to be combed probably more than any cat I’ve ever known.  Even today, he will sometimes plop upside down right in front of me and not move until I get the comb.  There have been many times I thought his skin might even be sore from me combing him so much and for such a long time.  Every time I’d try to quit, he jump in front of my hands and plop down again.  All the while, too, he’s talking to me.

Kodak really thinks he is the king of our household.  He can be somewhat demanding whenever he wants something.  He really lets you know what he wants, too.  He loves to talk and will get louder and louder if you try to ignore him.  It’s so funny.

Kodak has been the light of my life now for eleven years.  He’s such a special Ragdoll. 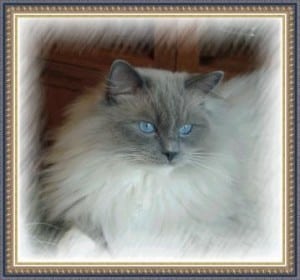 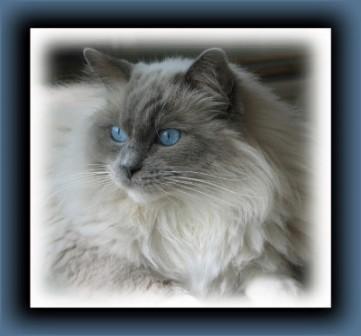 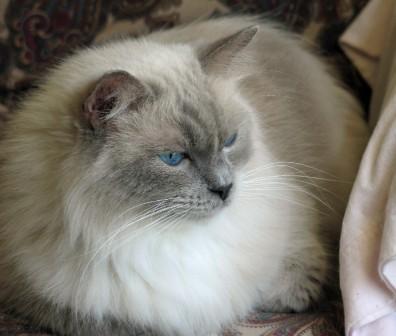