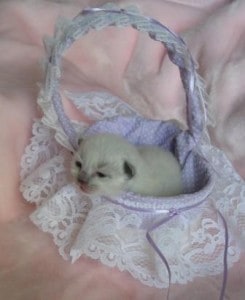 Saxon (aka Meriwidoz Saks 5th Avenue) came to us in August 2009 after Peg Horne Nelson and I decided Bastien needed a companion his age. My cats are older (11-12 years old, except for Shaman, who is about six but who would never deign to play with another cat—he is too busy chasing lizards through the window) and Bastien appeared to be lonely. 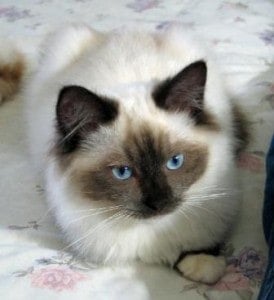 Saxon is a lovely, perfectly marked (in my opinion) Seal Mitted Ragdoll boy, born October 16, 2008. At first, I was struck by his rugged good looks and bunny-fur coat, but he was so mellow I was afraid he was going to get lost in the hustle and bustle of my busy house with my cats and with the rescue cats. I felt like he didn’t receive enough of my attention. I even talked to Peg about finding him another home and interviewed prospective adopters. For some odd reason, I can’t imagine why, I found fault with each one. One lady became irate when she came to meet him, and I wouldn’t let her take him home.

Then, one day, I realized that Saxon quite clearly knows how to get my attention. He is my make-up and wardrobe advisor, watching me carefully to make sure my blush is applied perfectly, as he sits between my mirror and me. Yes, his favorite toy is my blush brush, which he often bats around the counter top. At the least expected time, he will rush across the room, bounce across the bed, and lay full-length on me giving me “loving.” 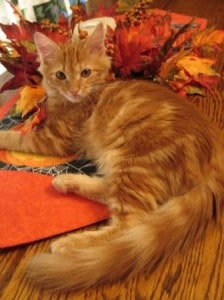 When my beloved Red Maine Coon, Aslan, died in June of 2010 (keep in mind that I love all of my cats with all my heart, but there are special cats as we all know, called “heart” cats, that hold our hearts and break them when they leave. Aslan was such a cat as was my Merlin of Merlin’s Hope), I thought Bastien would step up and be my “heart” cat. He is one of the most affectionate, most loving cats I have ever had, but strangely enough in the days and even weeks after Aslan’s death, it was Saxon who came to me every night and comforted me. Even Shaman who normally hogs my time at night with his loving moved over and let Saxon take over. A few months after Aslan died, I adopted one of my own rescues (surprise, surprise, a red Maine Coon kitten). I thought Saxon would go back to being that quiet member of my household. Not so! Saxon and Gryffin have become best friends and they often wrestle (with Bastien mixed in for good measure). If I hear the tromping of “big footsteps” coming down the long hall, I know it is the three of them playing chase. 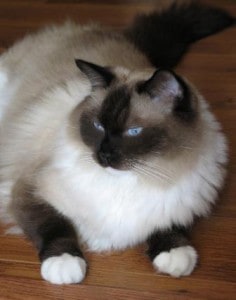 The funny thing is that Gryffin will cry for his mother (“MAAAAA”) when he is losing; Bastien will run away and act like he is too good to fight; Saxon fights until he wins or the others give up. Like his name, he is a true warrior and always wins his battles. He won my heart by being my wardrobe and make-up advisor, but he won his place in this household by being a brave warrior, a strange thought for a cat who is so incredibly mellow and gentle most of the time.

Oh, Saxon’s favorite toy is Gryffin (who he holds down and beats up) and my blush brush. How fortunate I am that I managed, somehow, to choose the exactly right cat to fit in and become Saxon’s buddy. 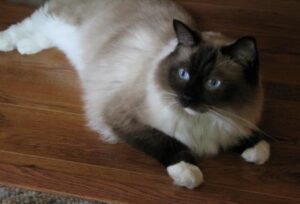 Saxon takes out his place on the floor