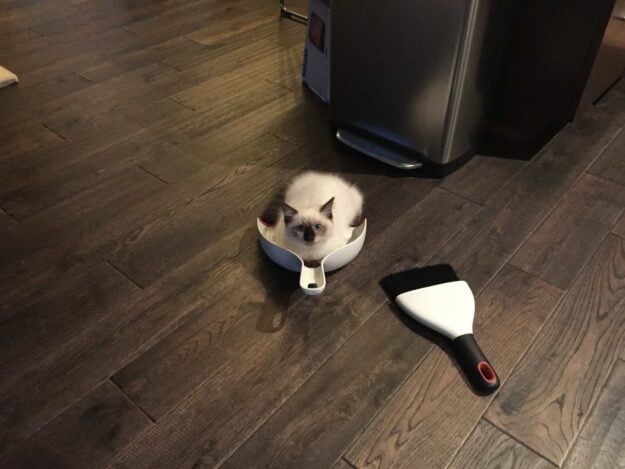 We adopted our Seal Colorpoint Ragdoll from a local breeder in 2015. Karma was born on June 9, 2015. When she was a kitten, she had a much lighter coat and as she has grown the darker colors have filled in and she has become quite the looker! The breeder is amazing, and we would highly recommend them: Longfellow Ragdolls. 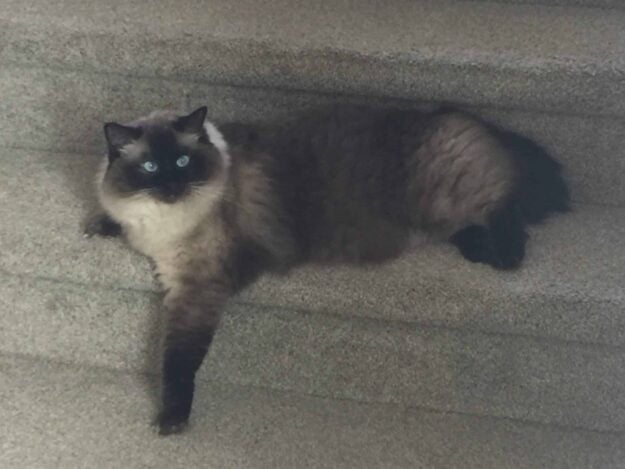 I owned a Persian named Sushi for a long time, which was my first time owning a purebred kitty (growing up, we had lots of mixed breed cats). When he passed, I knew that I wanted to adopt a Ragdoll as I had done some research and knew they were similar to Persians, but even more laid-back and really into cuddling and following their owners around from room to room. 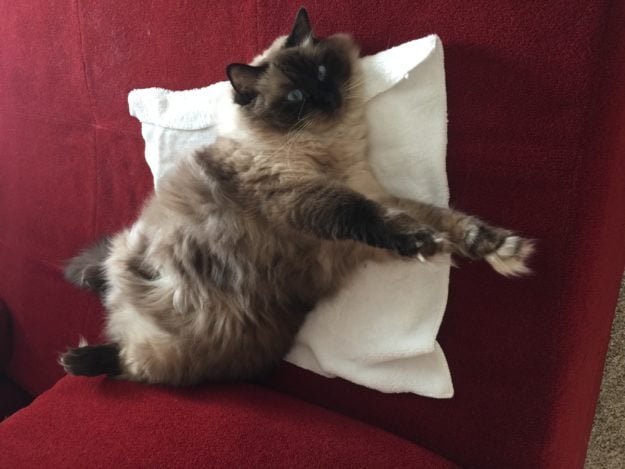 I wanted my two kids to experience having a kitten and bonding with the kitty as it grew. We now actually have two Ragdolls - Karma and Kioshi. My daughter chose Karma's name, and we think it fits her perfectly. 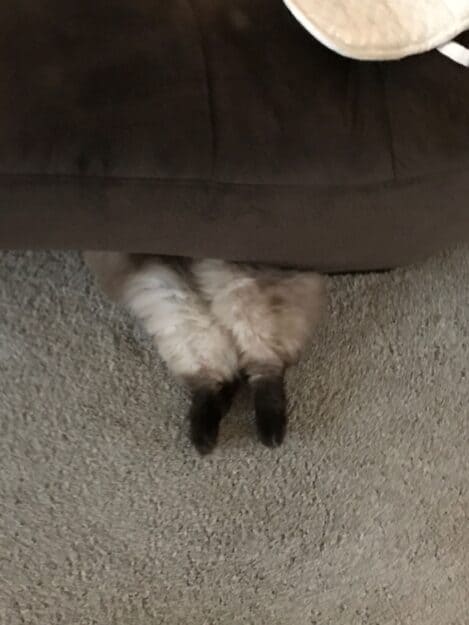 Karma is a giant kitty - 13 or so pounds. She is very maternal and loves "grooming" people. She has a VERY loud meow, in fact when we were driving her to our home when we adopted her, she let out the BIGGEST meow and both my kids burst into tears because they thought she was sad about leaving her Mom! 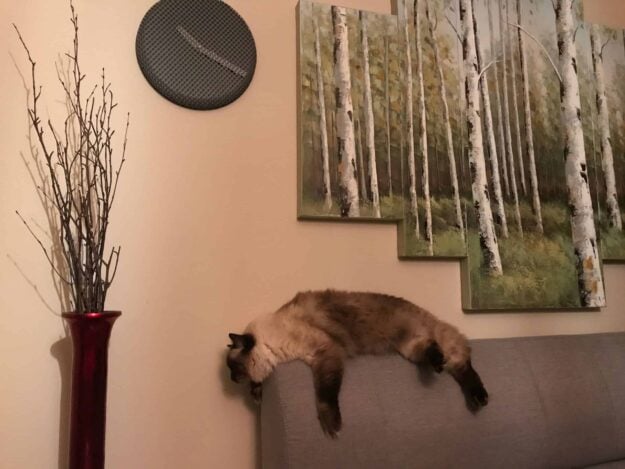 Her favorite way to lounge is draped over either side of our couch or the banister. She often calls out for us as she always wants to know where we are. She LOVES her wet food and will not stop talking in the morning until she gets her breakfast. She is very persistent. She enjoys watching catbird videos on YouTube as well as watching all the wildlife in our backyard. She enjoys being brushed (unlike Keoshi!) and will willingly sprawl out while we groom her.

Karma is the sweetest thing, but sometimes she can be a bit clueless. Once, she was looking down from the banister on our stairway and fell straight off! By the time any of us got out there to retrieve her, she had climbed halfway back up. She learned her lesson, though, and is quite careful when observing on her perch. 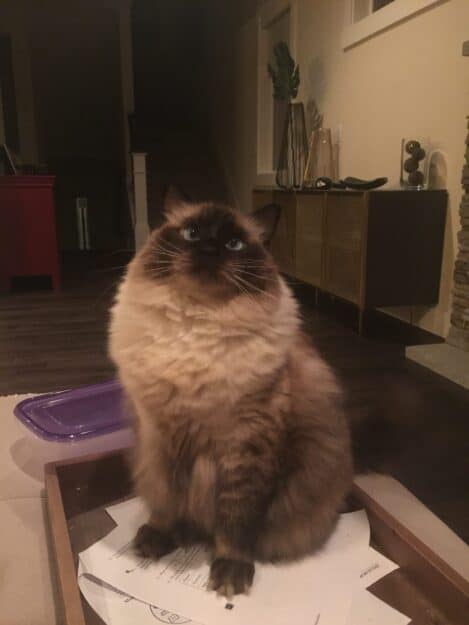 My best friend is a die-hard dog person, and she LOVES Karma. I never thought I would see the day when she would admit to loving a cat, but Karma converted her. In fact, her daughter has been relentlessly hounding her for a Ragdoll kitten for Christmas. Hopefully, she will get her wish.

We have a Pinterest board that features our kitties - Karma, Keoshi, and our Ragdoll that passed away - Wilson (plus other Ragdolls we like). After we adopted Karma, we soon adopted a Ragdoll named Wilson so she could have a friend. Sadly, he developed cancer and passed away at around 10 months old. We still miss him to this day. 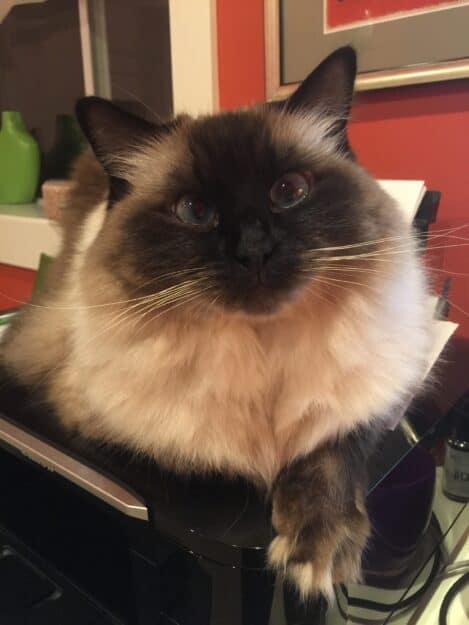 Karma loved Wilson very much and was incredibly sad when he passed away, as they had been very close. She and Kioshi are more like typical siblings. Karma is so motherly, and all she wants to do is groom him. But he just wants to play fight. 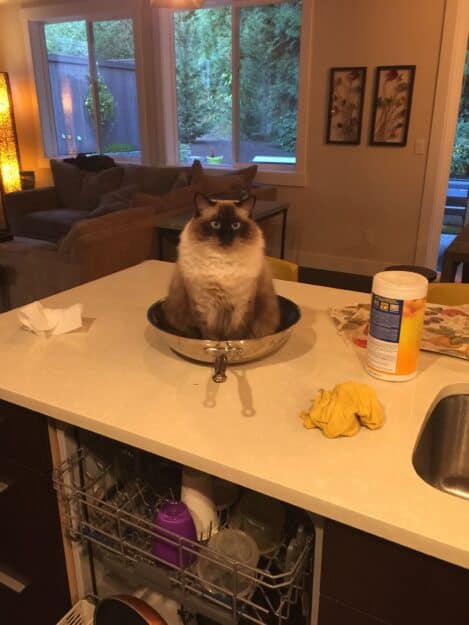 My whole family adores Karma (and Keoshi), and we couldn't be more thrilled to have them in our lives!!