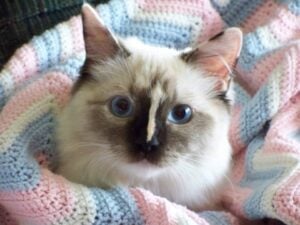 The story about how Abbie came into our lives is amazing. It almost didn't happen. Back in 2008 our cat passed away from kidney disease. She was a gorgeous tortie and had a big blaze on her face. I love torties and I also love cats with a blaze. When it was time to get another cat I knew I wanted to get a ragdoll. I had always wanted to have a ragdoll because I heard such great things about them. I read up on the breed and knew this was the breed for me. I love their beautiful blue eyes and how they are so fluffy. I was also fascinated with the ragdoll's coloring developing over time.

So I started researching ragdoll breeders in our area. I really wanted a seal colored ragdoll. And a seal tortie with a blaze was my ideal wish. None of the breeders I contacted had any seal kittens available. One particular breeder in our area had this kitten named Peaches on her website's kittens page that really drew my attention. 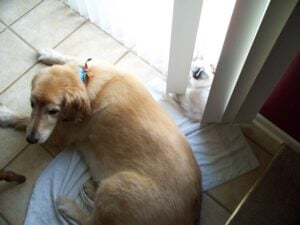 She was a seal tortie with a blaze. She is pictured here. I really wanted that kitten but she was already spoken for. So after much searching I decided to give up on getting a seal colored kitten and see if a blue colored kitten was available from this breeder. I contacted her and asked if she had any blue kittens and I asked if she had a blue tortie with a blaze available. She said no, but she did have a seal tortie with a blaze available! Then she directed me to her kitten page to look at Peaches. Peaches was available! The woman who was going to get Peaches was unable to follow through because her house had recently been destroyed by a tornado. So now the exact kitten I wanted was available! I couldn't believe it and I was thanking God. I felt horrible that the woman's house was destroyed, but was overjoyed that Peaches was available. So my husband and I went over to meet the kitty and she was precious of course. By 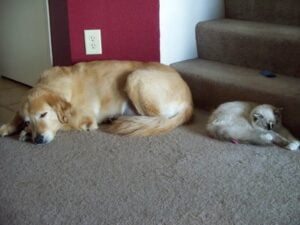 this time she was 5 months old and looked a lot different from her 3 month old picture on the website. But of course she was as beautiful as ever.

We took her home and named her Abigail and she goes by Abbie. We liked the name Abigail and thought it fit her. She explored the house very cautiously and soon settled in. At that time we had a big golden retriever named Murphy. Abbie had never seen dogs before. Murphy loved her from the start and was very excited to see her. However when she first saw him she was scared and hissed at him. But soon after he became her best buddy. She always wanted to be near him and they often slept next to each other. Sadly, Murphy passed away in 2012. 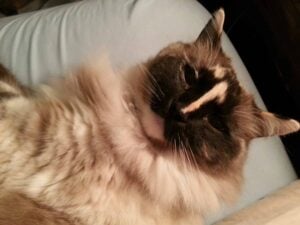 I love how Abbie walks so slowly, almost like slow motion. She's never in a hurry to get anywhere, unless she is playing. Abbie likes to play with milk rings, spring toys, pom balls and toy mice that rattle. She loves to play hide and seek. One of us will hide in a room around a corner and she will slowly come looking for us. When she finds us, we jump out and she takes off running. She loves it. Abbie's meow is more of a squeak than a meow. It's so cute. Abbie often talks back at us when she gets in trouble. We will tell her not to do something that she's doing and she will squeak back at us. She's a sassy little princess. She's not a lap cat but she loves to be petted and likes sleeping next to us.

Abbie was born in 2008 and is now 6 years old. We feed her Blue Buffalo food. After 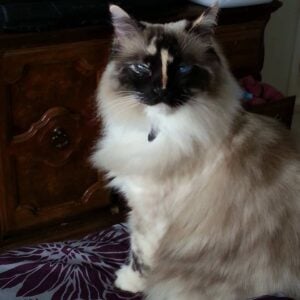 our cat passed away from kidney disease I started researching food and found out that there are a lot of bad ingredients in food that cats and dogs shouldn't be eating. We found that Blue Buffalo works best for our pets and it doesn't have any wheat, corn, soy or animal by-products. Abbie has her own Facebook page called The World According To Abbie. 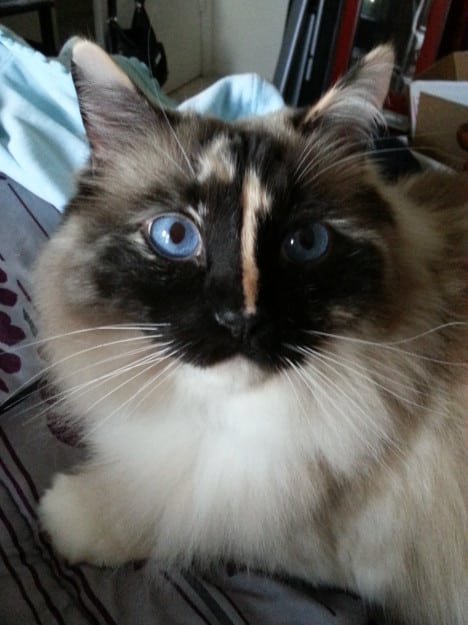 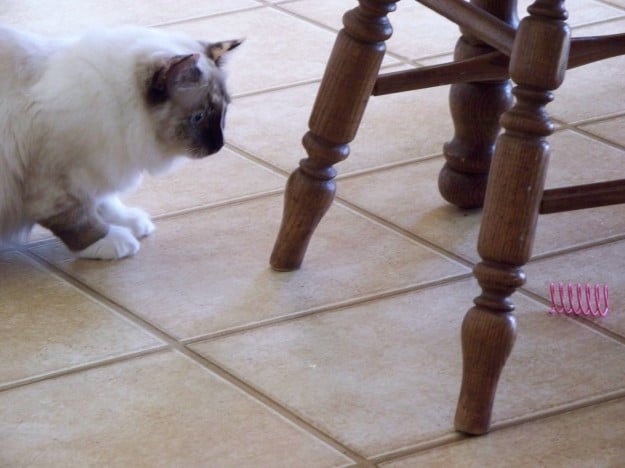