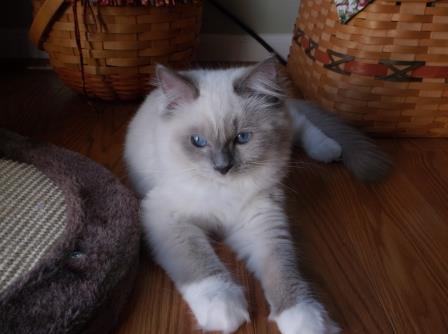 I’d like you to meet Jazzy Blues, aka Jazz.  He is five months old and a handful! Why a Ragdoll? Sad story, but with a good ending.  I had two Scottish Folds, Rascal and Scotty.  Rascal was my “Baby Boy”.  When he was five years old, he was diagnosed with HCM.  He put up a valiant fight for over 10 years, but in February of this year, the specialist told me it was time.  We said our final good-byes on Valentine’s Day.  It was heart-wrenching because he had been with me since he was five months old.  I lost my best friend.  Scotty, who soon will be 11, was alone for the first time.  He missed Rascal and my daughter who had moved out on her own a few months earlier.  We were a pair to be sure!! 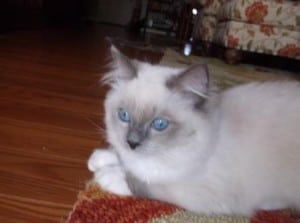 Over the years, I had seen and heard a lot about Ragdolls and had often thought about adding one to my house.  I did some research and found a great breeder in Cincinnati less than an hour away.  Kristie at BigCityDolls was wonderful.  She answered my questions and listened when I needed to talk about Ras.  I told her I wanted a male, blue if possible.  Well, it took a few litters to finally get one!  Jazz was born April 26.  I think I feel in love with the first picture. 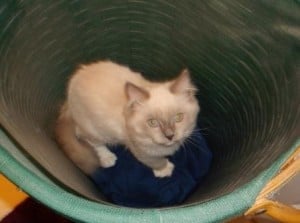 him in my bedroom for the first few days and slowly introduce him to Scotty.  I thought he’d be afraid, but was I ever wrong!  I opened the carrier door and he searched every corner of the room and bathroom in 15 minutes.  He wasn’t afraid of me and even slept with me the first night.  He hasn’t stopped since!  The introduction between him and Scotty was a little rough and didn’t go well because Scotty was sick. After four weeks of high fevers, meds and exploratory surgery, finally Scotty felt better and was not so grumpy.  They’re not best buds yet, but getting there. I found them Sunday, sunning themselves in front of the patio door with Jazz snuggled up against Scotty’s back and a leg over his shoulder. 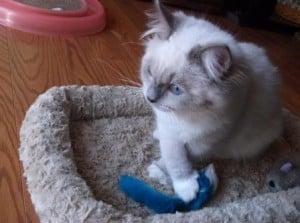 Kristie told me Ragdolls don’t like heights so I shouldn’t have a problem with him climbing.  Oh, Jazz doesn’t fit that one!  He’s on the dining room table, the kitchen counter, the back of the furniture.  He’s become familiar with a spray bottle!  Even when he’s doing something he shouldn’t, you can’t help but love his sweet face.  He looks so innocent!  Jazz loves to play in water.  While I brush my teeth or wash my hands, I have to leave the water running a little for him to play.  He splashes water everywhere.  He even likes to share my shower.  I dry him off after I dry myself!    He has several different toys, but I think he’s favorite is Scotty’s tail! It’s always moving and he’s always trying to catch it. 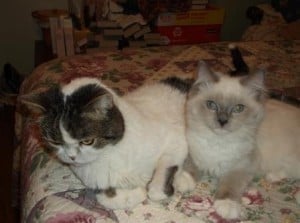 Jazz loves to be held and cuddled and he makes the sweetest sound when I pick him up.  He follows me around everywhere.  He’s into everything-silk flowers, trash, books.  He even grabbed the end of the toilet paper and took off running one morning. He had most of it off the roll before I caught him down the hall!  Perfect words to describe him – loving, sweet, mischievous, energetic.  I love my Jazzy Blues!