When my beautiful, loving 13 year old chinchilla Persian passed away from kidney disease last August, I never thought I would recover enough to care for another kitty. Silver was the light of my life, and I was utterly devastated by his passing. Several weeks passed, and I found myself desperately missing feline companionship. My fiancé suggested I check out different breeds and start looking for another kitty.  I thought of getting another Persian, but then realized that the memories of Silver might be too much for me. I remembered seeing a Ragdoll at the last cat show I went to; and thought how adorable they were, so I checked them out first, and was immediately interested in seeing them for myself.

The description of their personalities and the fact that they love spending time with their owners was definitely a plus, and I became more and more anxious to find one.

Although all Ragdolls are gorgeous, I was particularly drawn to the blue mitted ones, and I knew that I wanted another little boy. I quickly located a breeder close to my home, and made an appointment to meet one.

Brightstone Ragdolls was a wonderful experience! My only complaint was having to decide between the two available blue mitted brothers that Dave, the owner brought out to me.  They were both absolutely adorable at 12 weeks old, one kitty let me hold him almost the entire time, while his brother was much more rambunctious, and ran around the well-maintained house. While I stared into the striking blue eyes of the kitten in my arms, I knew I wanted to take him home. 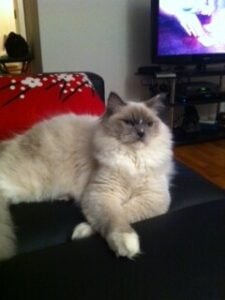 I decided to call him “Mittens”, because of his stunning blue mitted coloring, and his adorable little paws that looked as if they had white mittens on them. Mittens took to  his new home right away; he was curious about everything and could not stop exploring!

As a kitten, Mittens was extremely affectionate. He kept me up many a night by licking my ear, and playing with my hair; even taking over my pillow!  In the mornings, he follows me right into the bathroom, and waits for me to rub his belly before I shower.

Mittens also has a 6 foot kitty condo that he loves to watch the action from. He has become very adept at fetching; which is one of the “dog-like” traits of the Ragdoll.

Ragdoll kittens have big growth spurts, and Mittens was no exception.  By 8 months he was quite a big kitty, and the dark points of his coat were coming in nicely. He is really getting more loveable and beautiful by the day. He is now 14 months old, and our bond keeps getting stronger. I am so thankful to have Mittens in my life. I know that Silver is smiling down at both of us. 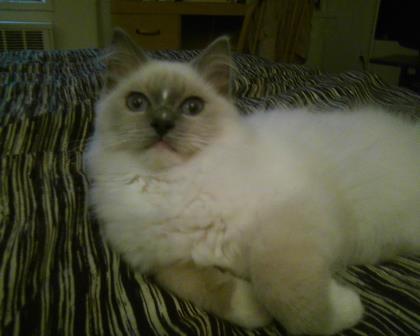 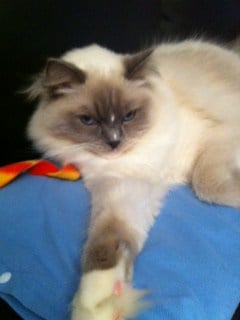