Heavy breathing in cats occurs when they have difficulty breathing. The medical term for this is dyspnea. There are many factors that can cause dyspnea in cats and in this article we are going to list them and go through the characteristic symptoms that cats display when they have difficulties breathing so that you can recognize them and take your cat to the vet as soon as possible. Heavy breathing in cats should be considered a medical emergency. There is little you can do for your cat at home and it is important that you take it to a vet clinic as quickly as possible because this could be a life-threatening condition. 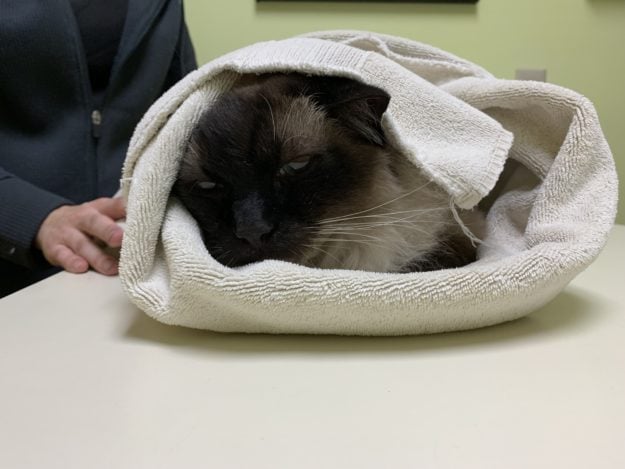 The Physiology of the Respiratory System in Cats

Before we get to the pathology, let's review the physiology of the respiratory system in cats. The first part of the respiratory apparatus is the nose, followed by the throat, which includes the pharynx and the larynx, then the trachea (also known as the windpipe), then the lungs. The trachea branches into two separate tubes, called bronchi, which enter the lungs.

The tube that enters the lung is also known as the primary bronchi. Inside the lung, the primary bronchi branch into separate smaller bronchi called bronchioles, which, in turn, branch into even smaller bronchioles. The branching continues until the alveoli - the last unit of the bronchial tree. Alveoli are small sacs where the passage of gases between blood and air occurs- oxygen passes in arterial blood, and carbon dioxide passed from venal blood.

The Pathology of the Respiratory System

Breathing difficulties in cats are generally referred to as dyspnea. Excessively rapid breathing is called tachypnea or polypnea. This can affect cats of all ages and it should be considered a serious condition because it can quickly become life-threatening.

Excessively rapid breathing is called tachypnea or polypnea. This can affect cats of all ages and it should be considered a serious condition because it can quickly become life-threatening. Click To Tweet

Symptoms of Respiratory Distress in Cats

It is very important that cat owners are able to recognize dyspnea in their cats. Should you notice that your cat is breathing heavily, call your vet right away and take your cat to the clinic. Here's what you should watch out for:

The cat will move its belly and chest while breathing to intensify it. The cat will open its mouth to get air in. The cat will also adapt its posture to permit a larger air intake - it will be crouched with the elbows sticking out of the body, and extend its neck and head as much as possible.

Depending on what the issue causing the dyspnea is located, the cat may have difficulty breathing in - inspiratory dyspnea - or breathing out - expiratory dyspnea. A heavy breathing cat may also make sounds when trying to catch its breath. This type of noisy breathing is called stridor.

Tachypnea means that the cat is breathing more rapidly than normal - more than 40 breaths per minute. The normal resting respiratory rate (RRR) is 20-30 breath per minute. You may hear some sounds it makes during this accelerated breathing. The agitation is present, as well as the modified posture, but the cat keeps its mouth closed.

Please note that tachypnea is not always a sign of respiratory distress. The main purpose of the increased breathing is to bring more oxygen to the lungs quickly. Tachypnea occurs physiologically after increased effort, such as running or jumping. If you notice your cat breathing rapidly after playtime, do not worry because it is not a sign of distress.

Tachypnea becomes a clinical sign when it extends over a longer period of time or when it is not correlated with physical effort. It is a sign of low oxygen levels in the body or low red blood cell count. Tachypnea may also appear in asthma cases or when the lungs are filled with fluid, or secondary to lung tumors.

The cat displays fast breathing, but the breaths are shallow. The cat opens its mouth to get as much air in as possible, but it is unable to take in enough air. 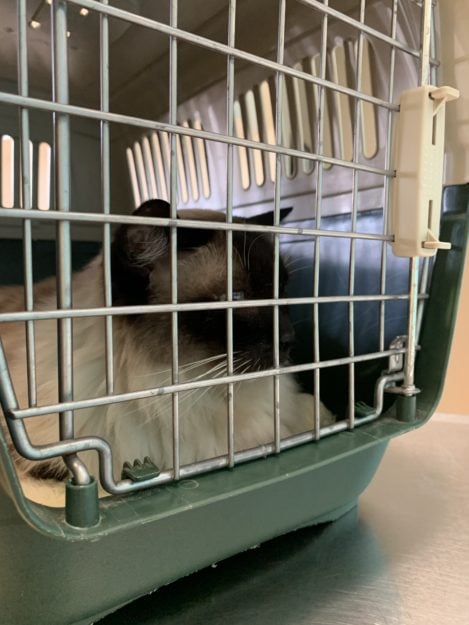 Cats do not cough often and they are distressed when they do. Coughing in cats looks similar to when they strive to vomit. They extend their head and neck, they open their mouth, and they contract their abdomen, making a sound. Coughing in cats does not sound like coughing in humans, so it might be overlooked. Because they make a lot of effort to cough, they might eliminate some saliva, which makes it even more similar to vomiting.

Cats do not cough often and they are distressed when they do. Coughing in cats looks similar to when they strive to vomit. Click To Tweet

The Sounds of Respiratory Distress

The cause of the cat's breathing in dyspnea sounds differently according to the cause of the respiratory distress. These are the three main sounds it could make:

The Causes of Breathing Difficulties in Cats

There are many types of respiratory issues that can occur in cats, so making a diagnosis requires a full examination. These are the main causes of breathing difficulties, according to the part of the respiratory system when they are located:

The obstruction can be mechanical - a foreign object stuck in the cat's nose or a growth in the nostril. Inflammation of the nostrils also leads to a partial obstruction because the nostril walls become enlarged, making the airway smaller.

As for the nose, any obstruction in the throat results in difficulty breathing. This commonly occurs when cats get food or foreign objects stuck in their throats like food. If this is the case, then the cat will struggle to breathe (dyspnea and panting). Depending on the size of the object/obstruction, the cat may only be able to breathe partially or not at all. This is a medical emergency and the cat must be taken to the vet clinic for an emergency procedure. Obstructions of the throat may also be caused by tumors or genetic defects.

The pathology of the lung is complex, so we are only going to list the most common causes of respiratory distress caused by lung issues: 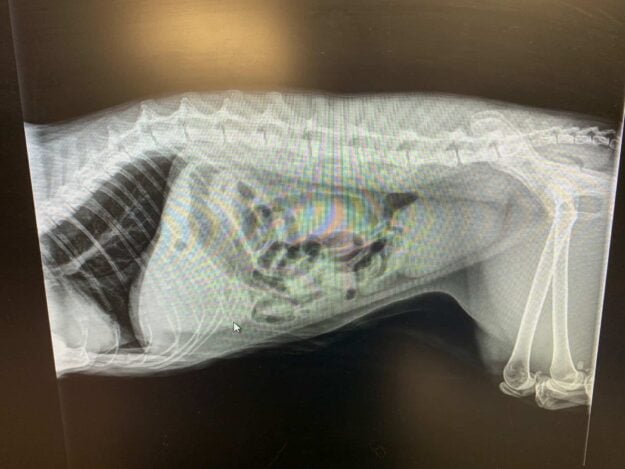 The pleural space is filled with a lubricating liquid called pleural fluid. When other substances get inside the pleural space and replace this liquid, the lung does not glide inside the chest cavity anymore and breathing becomes painful. Moreover, if a significant portion of the pleural spaces is filled, then the lung is not able to extend to the full length, which interferes with respiration. Here are some of the cases of pleural issues:

There are many causes that can lead to this, but here are the most common:

What Can You Do to Help Your Heavy Breathing Cat?

If you notice that your cat displays symptoms of dyspnea or tachypnea, the best thing you can do is call your vet. Even if your cat has minor breathing difficulties, it is important to find the cause because the condition becomes more advanced. You can first call your doctor, explain the situation and tell him or her about the symptoms you see - how fast the cat is breathing, its posture, the sounds it makes, if you notice blood or other fluids in or near its nose if you notice any wounds.

If you notice that your cat displays symptoms of dyspnea or tachypnea, the best thing you can do is call your vet. Click To Tweet

Then, the doctor will provide you with instructions. If you can't reach the vet, for any reason, it is best to take it to the clinic because diagnosing the issue and treating it as soon as possible is the best course of action. If your cat displays major respiratory distress, then call an ambulance because the condition could evolve quickly and become life-threatening What Happens At the Vet?

When you take your cat to the vet, the doctor will first assess the situation. The only thing you can do is tell the doctor what you have noticed. This will serve as a starting point in the diagnostic process. Respiratory distress requires a full check-up, as well as additional investigative tests.

As part of the initial assessment, the vet will monitor the cat's oxygen saturation and blood pressure. The vet will examine the cat's nose and mouth, and then, each of the components of the respiratory system, one by one.

The doctor will also perform an ECG to assess heart function and order blood work - a complete blood count and biochemical profile, to start with. A urine analysis is also required. These tests could provide valuable information about infections, and/or heart disease.

A very useful test that the doctor may perform is a chest X-ray, which provides information about the structural integrity of the respiratory systems. Should the symptoms require it, the doctor may also perform an ultrasound to assess the abdominal organs and the diaphragm.

To diagnose obstruction across the respiratory system, the doctor may insert a small camera inside the airway. This is called a rhinoscopy - if the examined area is the cat's nose, and a bronchoscopy - if the examination extends down to the bronchi and bronchioles. According to the diagnosis, the doctor may need to perform a surgical procedure to help the cat breathe properly.

In emergencies, the assessment is limited to determining the direct cause of the dyspnea and treating it. For instance, if the cat has a foreign object lodged inside the throat or trachea, the doctor may need to perform an emergency tracheotomy - making a small incision in the cat's trachea posterior to the obstruction and inserting a tube so that the cat can breathe. This is followed by the surgical removal or the obstruction. In pneumothorax or hemothorax, the excess air/blood must be eliminated from the pleural space as soon as possible to permit the cat's lung(s) to inflate.

Depending on the diagnosis, the cat may need further treatment - short term or long term - and even surgical procedures (to remove tumors or obstructions). The doctor will explain how to administer medication to the cat and will indicate when it should come back for checkups.

A heavy breathing cat should never be ignored because in many cases, this is a medical emergency. Make sure you have your vet's contacts available, should you need to get in touch with him or her. Has your cat ever experienced respiratory distress? What did you do? Tell us all about it in the comments section below.