×
Home » Ragdoll Kitten of the Month
I was always interested in Ragdolls and wanted one so desperately. I was thrilled when I adopted Ulalume, my seal tortie point (who was Kitten of the Month in May!) from O Canada Ragdolls here in Ontario. She was a bundle of kitten energy and has the most diva personality EVER. I also already had a senior cat, Willow, who unfortunately passed away a few weeks after Ulalume came home. So, she became the only cat in the apartment, which was a bit of an adjustment. I noticed as the weeks moved on, she was getting a bored of her toys and being a bit aggressive. My mother and I talked about getting a little playmate for her but hadn’t decided yet. We then got her spayed and I e-mailed the breeder to send her the paperwork for it. 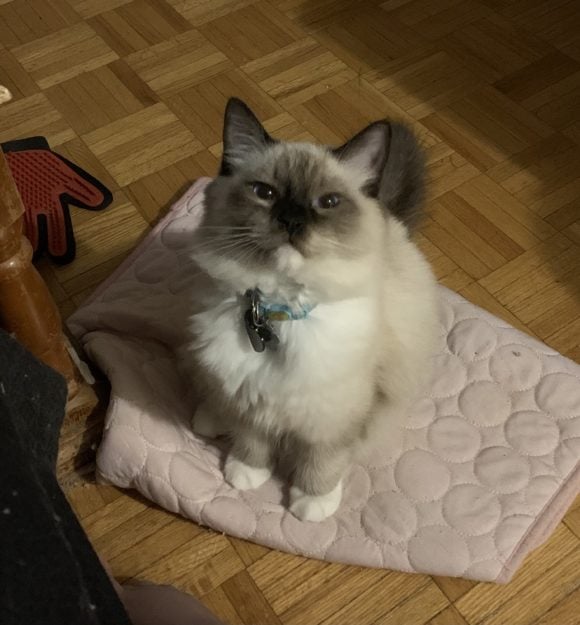 She asked me if I wanted a little brother for Ulalume, as her mama was having another litter over the summer. I was so tempted! Then I checked the breeder website on a whim a few days later and saw a little seal point mitted boy named Oreo. I absolutely fell in love! 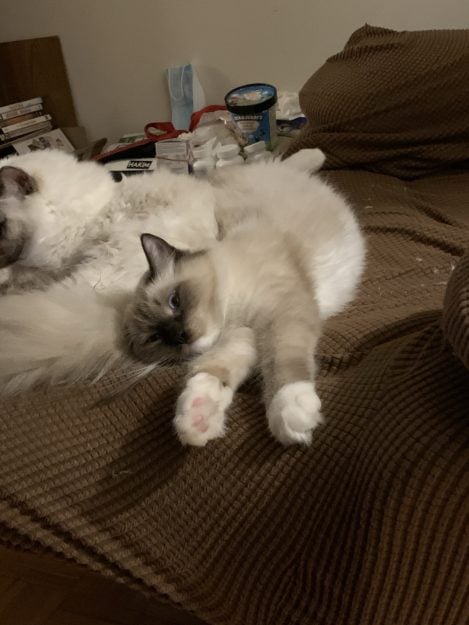 He has perfect markings, his ears definitely reminding me of Oreo cookies, his little face so masculine with his white chin. Of course, as with mitted Raggies, his white chin spreads down his body, his little creamy center. And let’s not forget his little white paws! He hasn’t quite grown into his fluff yet, his coat smoother than Ulalume’s, but still soft. 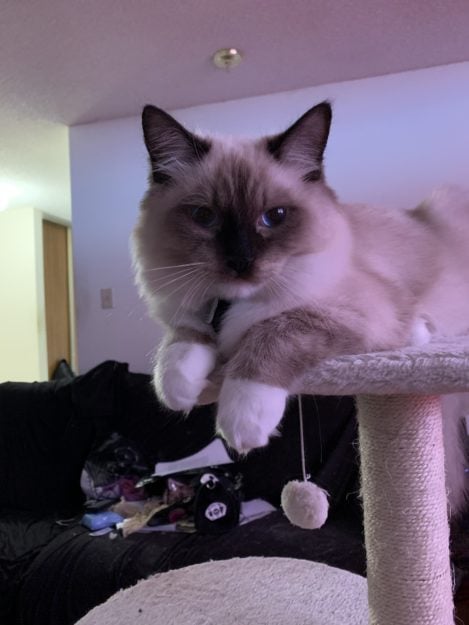 We made the arrangements and he came home on August 1st, 2020 at 13 weeks. He was born April 29th, 2020, so he’s coming up on six months already at the time of writing this. Though we always joke about him being our little Oreo due to his creamy center, his name is now Vincent after one of my favourite actors, Vincent Price. We rarely refer to him as Vincent because Mr. Price had a nickname from his family—Bink! So, now he’s Bink, Binks, Binkie, Binkman, Binkmeister! 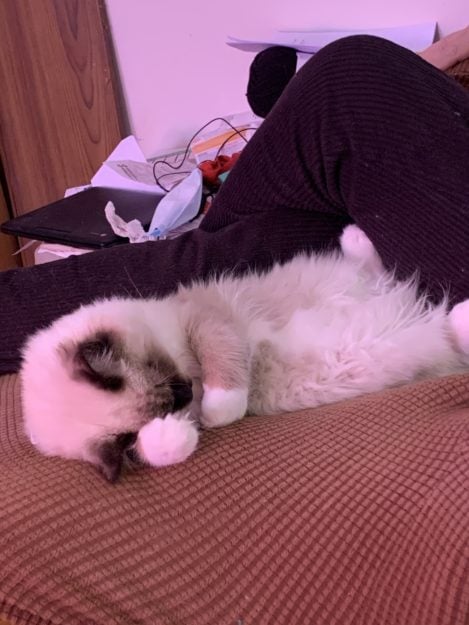 Binks is the most amazing little man. He’s so different from the diva, Queen Ulalume, who runs the apartment. Having said that, he still has us wrapped around his little paw! My mum specifically has a special bond with him, and I always tease her that she “stole” him from me. Truth is, he loves us both equally and we adore him. 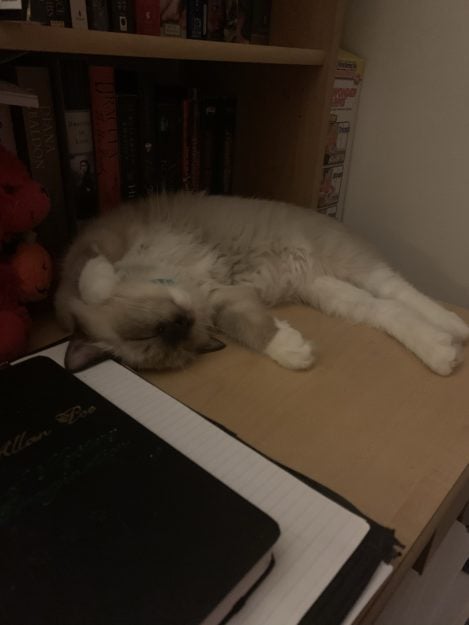 He absolutely loves mealtime; he’s very food motivated. He gets Instinct wet food 3x a day, as well as has Instinct kitten kibble available in a puzzle feeder. A trick that I learned from my amazing vet to make sure they get enough water is to add a little to their wet food and make a soupy mixture. My two absolutely love it and now turn their nose up to anything different. We also have a fountain too, which has made a difference in their drinking habits & I honestly don’t know why I didn’t have one before!

But more on Binks! He’s very laid back and extremely floppy. Like, he’s the perfect floppy cat. He absolutely LOVES cuddles and he’s very affectionate. The second you touch him he starts to purr and rub into you. He’s a loveable squishy guy, already at almost 10lbs! Often while I’m writing at my desk, he comes for pets and then snuggles up on his blankie I put on the desktop, sleeping near to me…and sometimes Ulalume joins him! 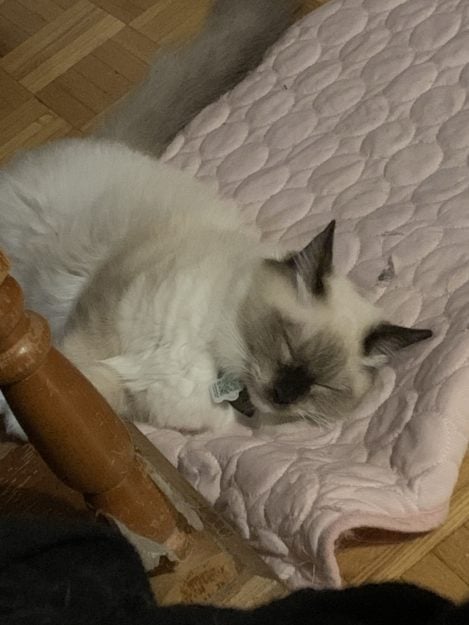 His favourite thing ever is food…but his second favourite is playing. He likes round objects that he can bat and chase. He has a little ball that he loves so much, he has it hidden away! He sometimes brings it out to play, chasing it around like a little madman, Ulalume joining in on the fun. They also love the plastic springs, and Binks loves to get into the toy box and bat around all the various toys, dragging them out! Worse than kids, I tell ya. 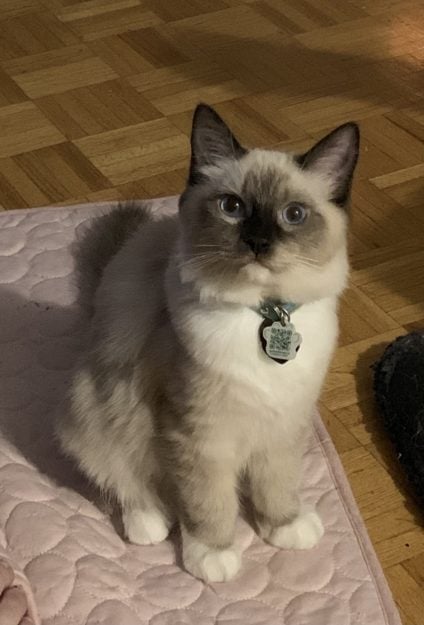 The two kittens get along fantastically! I am so glad I listened to my breeder and got another kitten. Ulalume calmed down almost instantly and they bonded so quickly that I was very surprised. They love to nap together, especially on the couch, getting into a fuzzy cuddle puddle. 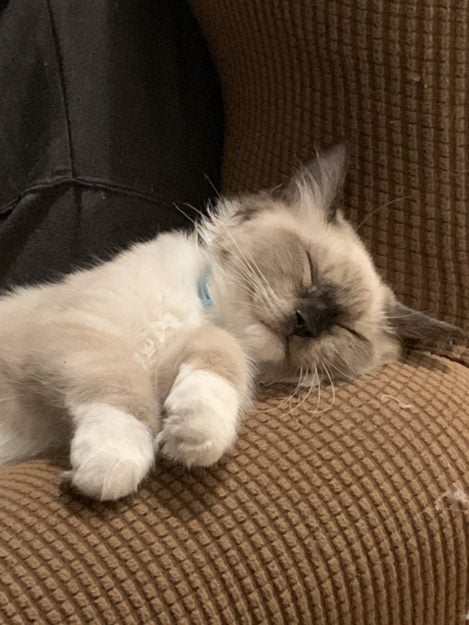 In regards to litter, I can’t speak highly enough about World’s Best Cat Litter. A friend of mine came to see Ulalume and she asked where our litter boxes were…I pointed it out and she was surprised because you can’t smell anything! Obviously with two kittens now, it’s double the scooping, but it’s definitely worth the extra money. Do you have a Ragdoll Kitten or Cat?  Consider submitting your kitty!  Ragdoll of the Week submission guidelines Read more Ragdoll Kitten of the Month submissions.