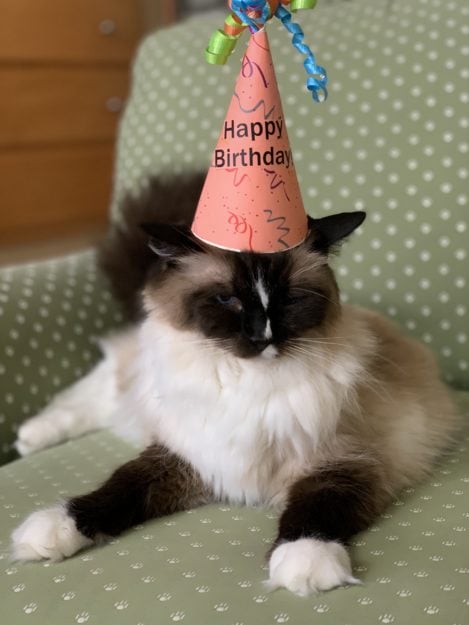 As many of you know, Murphy is my parents' seal mitted with a blaze Ragdoll cat. He lives with his half-brother Caymus, who already celebrated his 15th birthday on the 15th and a 2-year old German Shepherd, Parker.

I call Murphy, "Beau." I rarely ever call him by his name. I love my Beau. My sister calls him "Papa Smurf". It's funny, Beau is one cat that I don't really call by anything else - Caymus, Charlie and Trigg all have multiple nicknames, but Beau just has the one from me - sometimes, it's Beau Beau, doubled up. But he does understand that it's his name, along with Murphy and Papa Smurf. 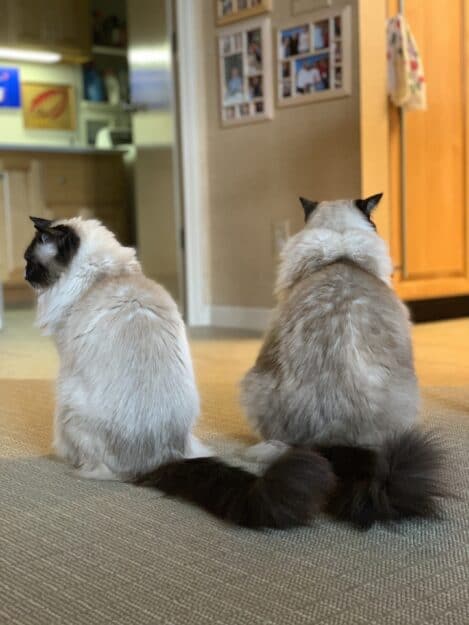 Murphy is a confident, social and attention-seeking cat.

I remember when I brought Charlie and Trigg home. I wanted to get Caymus and Murphy used to them - but it was a difficult situation because Caymus and Murphy would not be living with us. So I would bring Caymus and Murphy (they know my home) over individually to meet the kittens - and spend hours with them.  I was too scared to bring them both at once, fearing they would feed off of each other. I didn't know how they would react, but totally thought at the time that Caymus would be the easy one. NOT THE CASE. It took Beau no time at all to accept them and want to play.  He was a very good kitty with them.

Murphy was sort of an a-hole to my cat, Rags - always challenging him for dominance.  I always told him that when Rags passed, it would be his turn - and it has been.  Charlie hates that - because he's the dominant one in our household, but when the 4 of them get together, Murphy is the dominant one...although their egos have lessened as they have aged. 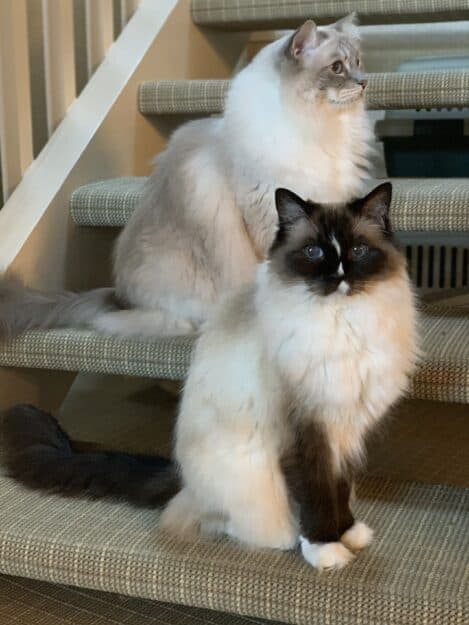 Murphy is young at heart - he loves to play and will play easily...acting like he is a 2-year old.

Unlike Caymus, Murphy was immediately okay with all the dogs - and always puts them in their place.  I think he's on his 5th German Shepherd.  My sister has a 5-month old German Shorthaired Pointer and Murphy is already training him too. 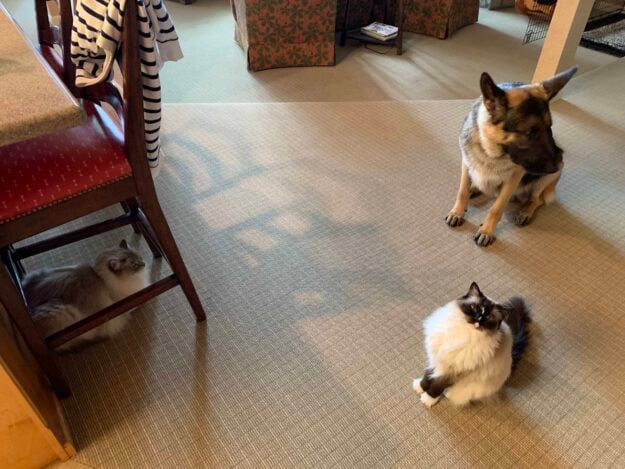 Murphy and Charlie are a lot alike - they like to be where the action is. Our family has a lot of cats with blazes (white stripe on their noses) - we have a theory, given our experiences with blazed cats that they are all outgoing (I do hate stereotyping cats, though - so take this theory of ours with a grain of salt).  This is the case with Murphy.  When my parents' house was for sale, he would follow around the realtor and potential new homeowners.

It's very difficult to get a good photo of Murphy - as soon as you get on his level, he comes towards you to be petted and to greet you.  He demands a lot of attention - more than my Charlie does (which is also a lot).  He was the one that helped me realize I couldn't get a third cat because I just don't have the emotional capacity for a third cat.

He's not a huge fan of being held and will tolerate it only for a few minutes and then he wants down.  My mom does have a way she picks him up and scratches him that works - I need to get that on film. 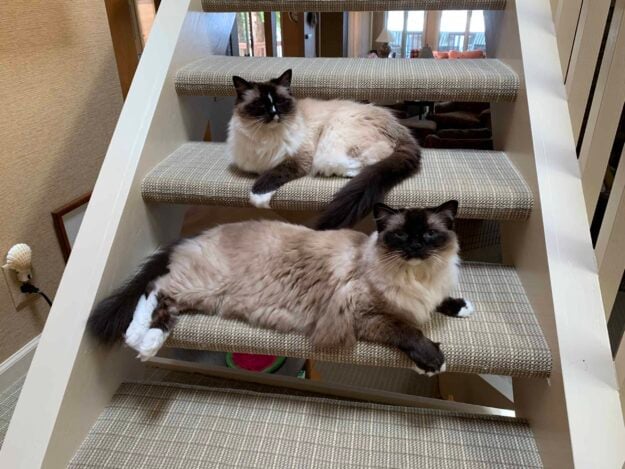 Murphy on top stair and Caymus on bottom stair

Murphy was and has been an awesome cat with my nieces and nephews.  He has let them pet him, pull on him, pick him up and more - which is amazing given he did not grow up with kids.  Caymus is the same.  However, in the last two years, Murphy isn't as tolerant as he used to be - I think he must hurt sometimes when they pick him up - I always watch it carefully.  But his tolerance isn't as great as it used to be.  However, he still is an incredible cat with them - much more than my two would be with young children.

I recently talked about how we ended up with Caymus because of Murphy on Caymus' birthday post.  The first Ragdoll in our family was a cat named Halston - adopted by my Aunt Nicky in the 1980s.  He was a BEAUTIFUL seal mitted with a blaze Ragdoll cat.  He is the reason I wanted a Ragdoll.  Our family loves that color pattern because of him, so I went searching for that pattern when my mom agreed to get a new kitten when my childhood cat, Rags was 15 years old.  That's how I found Murphy on Bluegrass Rags' website. 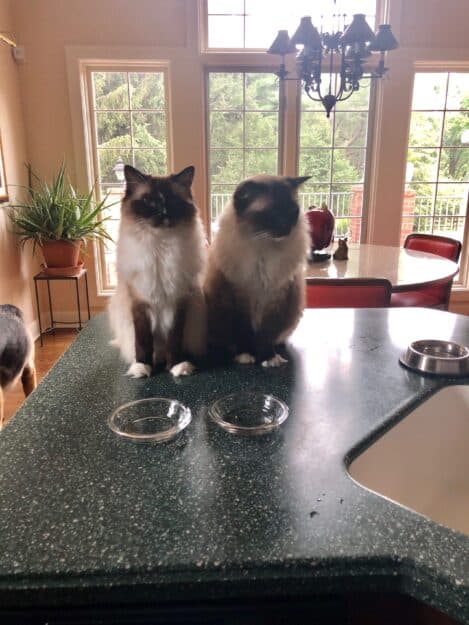 Murphy's coat is a great non-matting coat - but very different than Caymus'.  Both Caymus and Murphy are very tall and long cats - and have longer tails than my cats.  Murphy is very slender, however - he has a body that looks a lot like a cheetah would compared to a lion.  He's an athlete too because of his body shape.

He loves to be man-handled and messed around with - if you've seen that video of the Ragdoll cat being slid across a kitchen floor - that would be Murphy.  You can push him over, grab his tail, etc and he comes back for more...well, if you are someone he knows is messing with him and not trying to hurt him.  My mom recorded this video of me picking up Murphy a few days ago.  As I commented on the video on Facebook, Trigg would kill me if I did this. I do it with Charlie. This would never fly with Caymus, and this pick up makes Beau stay longer.  Just another example of how he likes to be messed with.  He's a very good sport too, because of his desire to be messed with...always coming back for more.

Murphy has one brown spot on his back leg where it's supposed to be white for a show-quality Ragdoll cat - so that's what made him pet quality and available on Cindy Carpenter's website many years ago.

I cannot tell you how excited I was to get Murphy in November 2004 - it was our first seal mitted with a blaze cat after my Aunt Nicky's Halston in the 1980s - now it seems like we have a zillion with Charlie, Huck, Hobbs, and Maddie.

Murphy has that traditional Ragdoll look to me - the right facial profile and reminds me the most of Rags' features.  Hard for me to describe because I just see it, or I don't - and I do not have experience showing cats, so I don't have the terminology to talk about what I see.

I love Beau Beau - he seems to understand my obsession with Caymus and allows it to be OK with him.  Unlike Caymus, and much like Charlie, I can have a complete conversation with Beau through my eyes - and can get him to do what I want by facial expressions and eye contact - which is how I communicated with Rags.  It is nice to have that as it was one thing I feared when Rags' passed - that I wouldn't have that connection again - but Murphy and Charlie get it and do it with me. 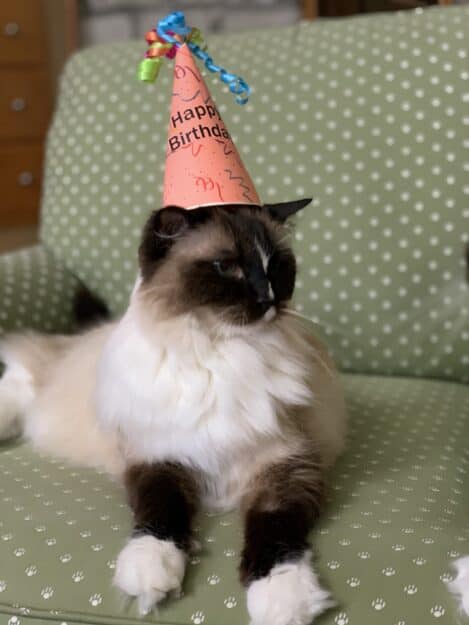 Happy 15th Birthday to Beau Beau!  May you have many more birthdays with us all!