Today is Caymus’ Golden birthday! …meaning he is turning 15 on the 15th. 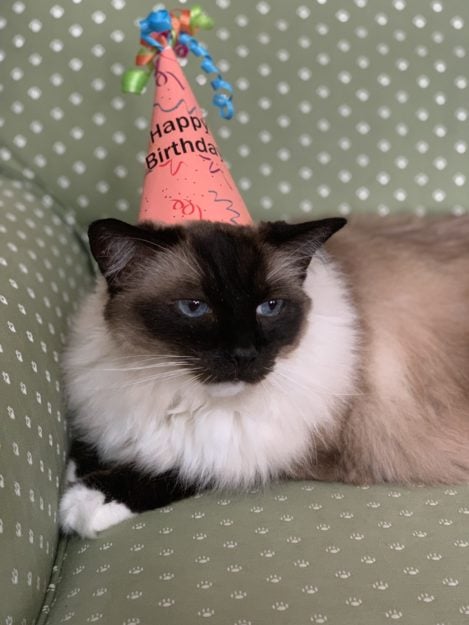 But Caymus doesn’t want to talk about it. 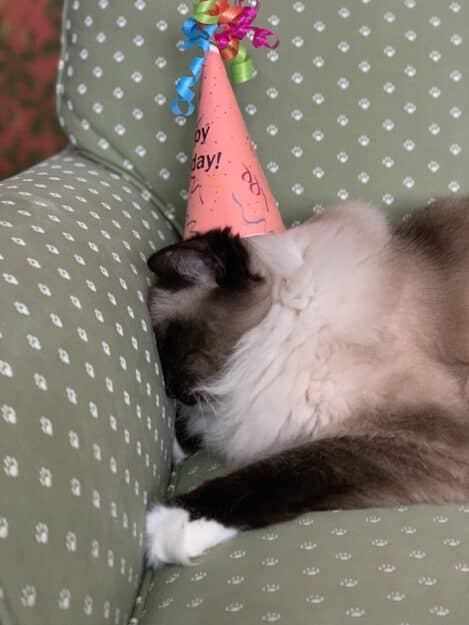 As many of you know, I absolutely adore Caymus.  He is a soulmate of mine.  He lives with my parents, his half brother Murphy and Parker (a German Shepherd).

Caymus and Murphy came to live with my parents in November 2004 right before Thanksgiving.  My childhood Ragdoll cat, Rags, was 15 at the time, and I had talked my mom into getting a kitten because of Rags aging.  We wanted a seal mitted with a blaze because when my Aunt first got  a Ragdoll cat in the 1980s, that’s what she got and we fell in love with him.  He was gorgeous.

When I started looking for seal mitted with a blaze Ragdoll kittens on the Internet, I found two and started to email with the breeders about them.  When Caymus and Murphy’s breeder, Cindy Carpenter of Bluegrass Rags, found out that we had a 15-year old, she suggested strongly that we get two kittens instead of one.  She said that they would play with each other and most likely leave the old guy alone.  It was probably the best advice we ever got.  Murphy has a blue mitted with a blaze full brother, but my mom prefers seal mitteds, so Cindy suggested a seal mitted from another litter she had.  And said that the kittens shared the same father.  And that’s how Caymus came into our lives.

My Dad, who was not a cat fan before Rags, was hard to convince that we should not only get a kitten – but two kittens!  As a result, we named Caymus after one of his favorite bottles of wine, Caymus. 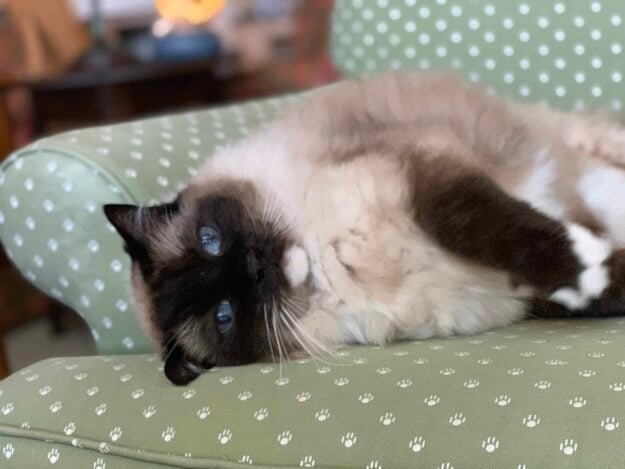 I can tell you though – 15 years later, Caymus is such a Caymus.  He could have no other name – well, other than my pleathora of nicknames – Newy, NUSS!, Cay-cay-newin’, etc.

Caymus’ coat is the breed description for a Ragdoll cat – it is plush, doesn’t mat, feels divinely luxurious.  He is heavenly to touch – and he also fits the breed stereotype when you pick him up – he is limp like a Ragdoll (unless he is stressed about something) and DEFINITELY requires a two handed pick up, otherwise he will fall out of your one hand. 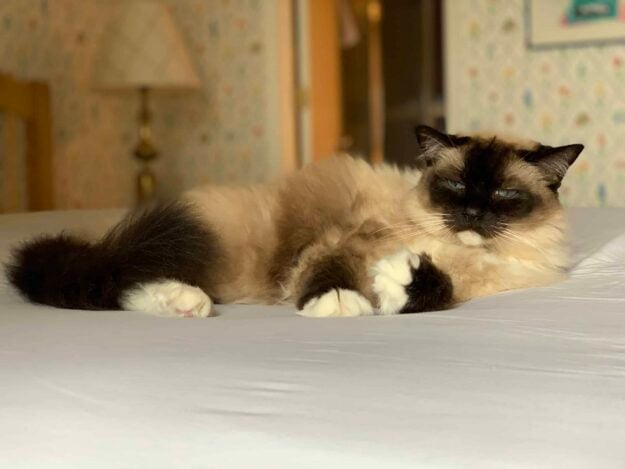 Caymus has always been the biggest cat in our family in height, length and weight.  As he has aged, he has lost some weight, but still remains the “biggest” in height and length.  At his prime he was 17 lbs, I think he is 15 lbs now. 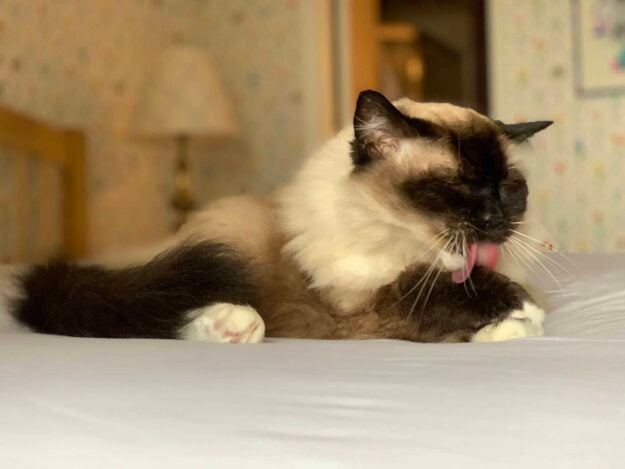 Caymus has a small head, big ears and big body, and certainly would have never passed for a show Ragdoll cat, but good god, do I think he is gorgeous.  He respected the heck out of my Rags, and I will always love him for that.  He is the kindest and sweetest animal I have ever known (the only time I have seen him really retaliate is with dogs).  He has come to be comfortable around dogs, but when we first got my parents’ German Shepherd, Napa, he was really upset – peed in my shower from the stress, etc.  Over the course of Napa’s life, they became best buds.  Caymus is now on his 4th (?) German Shepherd, my parents’ 2-year old, Parker. 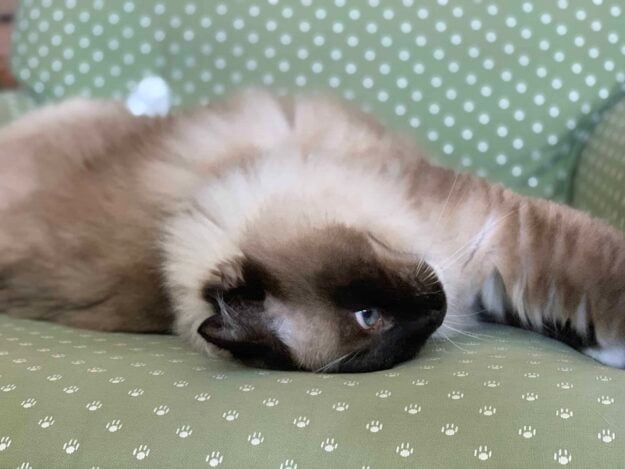 I can be in the worst mood – depressed about life – but Caymus, Caymus will cheer me  up.  Just the mention of his name makes me happy – he brings a joy to my soul that few can instantly bring. 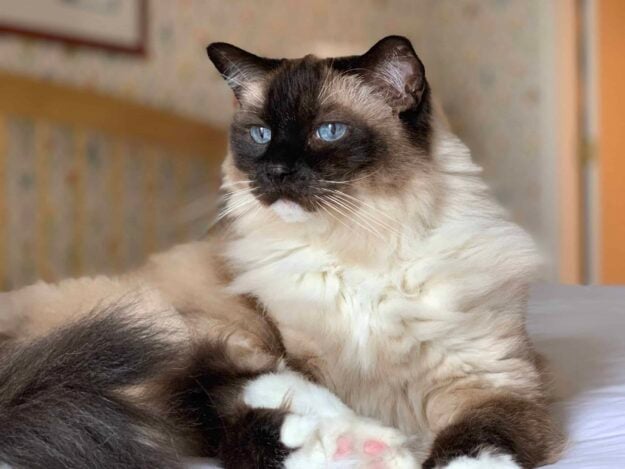 I love his purr and his personality is so weird and awkward that I don’t really know how to describe it.  I had to describe his personality recently to a homeopathic vet we were consulting with, and I said that he walks into a room like Eeyore from Winnie the Pooh…but he’s not sad or depressed – but it’s that, “hey, guys…” type of approach.  I just love his presence.  He does get playful and alert – but not like other cats.  I would say that Trigg has a lot of Caymus-like characteristics – especially in their skiddish-ness.  Caymus lives in a household that is MUCH busier than my own, so he has learned to adapt and has grown much less skiddish than Trigg. 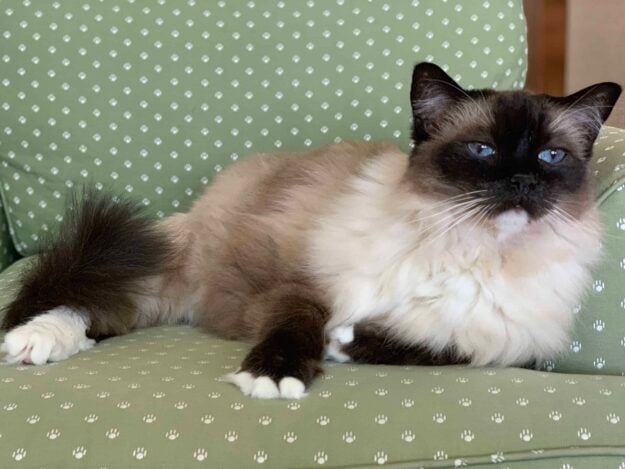 I often tell Caymus that if everyone in the world had him, the world would be a much happier and peaceful place.

So, technically, Caymus is my parents’ cat.  I ask my mom every year for my birthday and for Christmas to gift him to me.  She won’t do it.  And to be quite honest, I couldn’t take him from Murphy – they are a bonded pair.  I did live with Caymus and Murphy in my early 20s when I still lived with my parents, so I feel like they are my cats too.  I go to every one of their vet appointments with my mom and always check in on them. 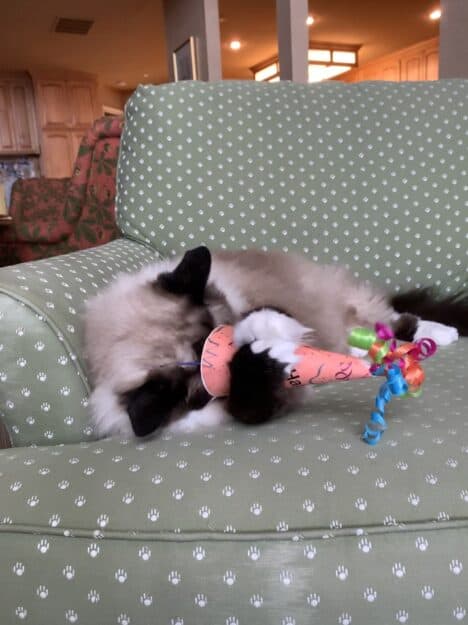 Happy 15th Brithday to my beautiful Caymus!  I hope you have many, many more! 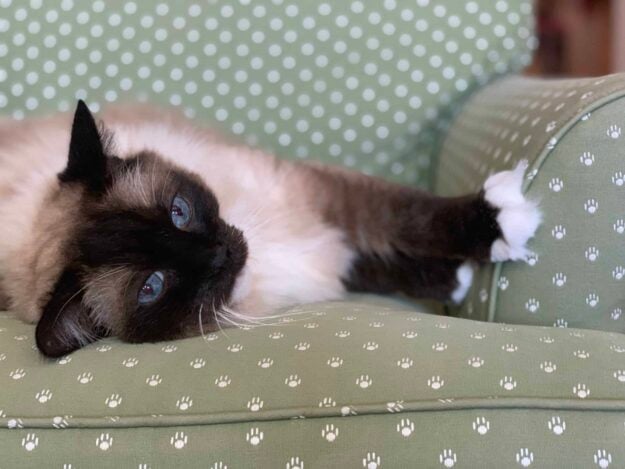