For 15 years I cherished my Tomcat, Java and for 7 years my Persian, Sugar until for severe health problems, I had to let them go to Kitty Heaven. I still had my two dogs: a Pekingese named Darlin and a Cavelier King Charles Spaniel named Gracie, but something always seemed missing in our house, and you know what it was! Yes..There was no cat. I told my daughter, Lacy that we just had to find us a new cat. I had seen a lady at a local cat show carrying this huge cat that hung out of her arms. I asked what kind of cat it was and she said it was a Ragdoll. I remembered this encounter and decided to search on line about Ragdolls. I was convinced that this breed was for us. I chose a breeder, Barb Jones in Utah who’s site was Catlana’s Ragdolls. She sent me a picture of a little boy born on February 9, 2011 who was ready for adoption. 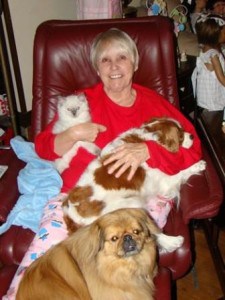 “That’s our baby, I exclaimed!”  A few days later Lacy and I anxiously waited at the airport for Cookie to arrive in Jackson, Mississippi. From the moment I saw him, his name would have to be Cookie.  I don’t know why, but that would be his name.  He was so precious and calm to have been on such a long trip.  We were so worried how the dogs would take to him, but from day one they became a family: two sisters and a baby brother.

We started him out with a small scratching post and a round-about which he loved and still does to this day.

It didn’t take long for him to need a bigger post.

Cookie like to eat! He likes to entice his sister, Darlin to play chase.  He likes to get into his cardboard box and swat at his tiny mouse on a wire swinging above his head. He loves to have his tummy rubbed, but even more for his back and tail to be scratched. He loves to sleep with his sisters. 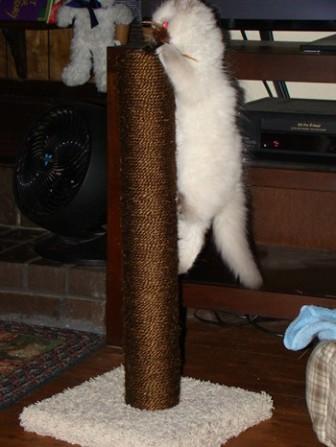 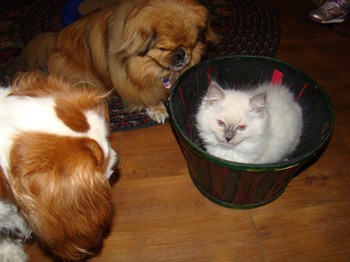 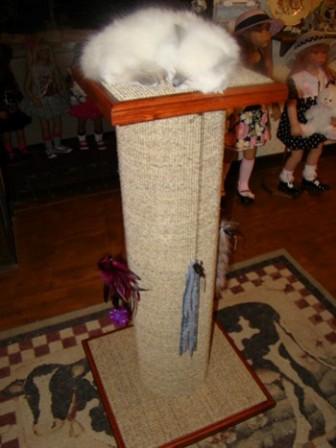 Here they are at Christmas.

As you can see he has gotten a lot bigger…around 15 pounds now! 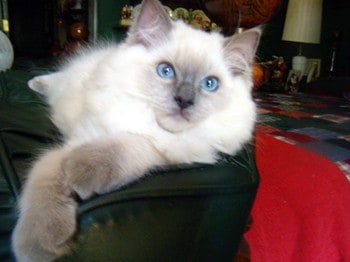 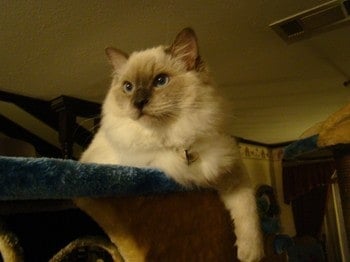 We started calling him little prince because he acted like royalty all the time.  What does a prince need?  Why a castle of course! 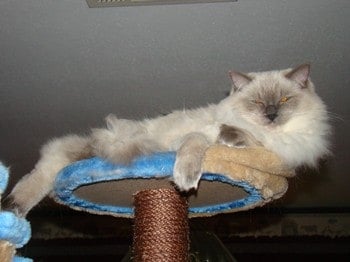 He loves his castle! (Kitty Mansions Amazon Cat Tree) He naps there each day.  He also loves to crawl into bed with my baby dolls. 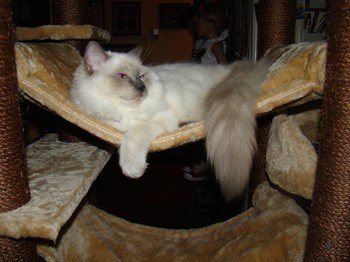 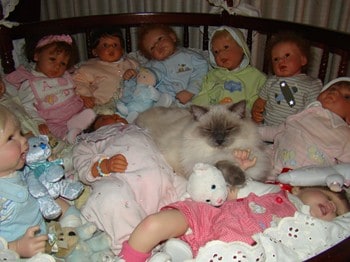 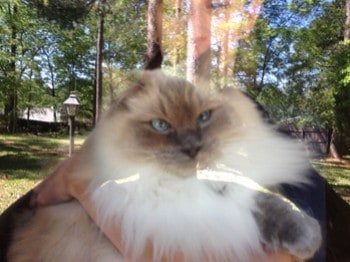 Cookie follows me all over the house except when he’s napping.  He lets me know when he wants to eat.  He waits by the backdoor for the dogs and me to get back from our morning walk. Once I put him on my shoulder to step outside while the dogs were pottying.  He got so scared and held onto me.  I could tell he was frightened.  He does not ever try to go out the door when I let out the dogs…just watches them through the window. Here Lacy is holding him and letting him watch us though the glass door.  I took this picture from outside.  I thought it was unique.

Cookie has been very easy to train as to not getting on the furniture.  He understands that is fine to get on the couch, chairs, and bed, but not the wooden furniture. All three of my babies sleep with me, but in the last couple of weeks, Cookie has started waking up at 4:30 a.m. and going around the bedroom checking into things.  Darlin helped me train him as to not getting on the furniture and has always been my Cookie watcher. Darlin would growl and bark at Cookie to the point that I could not sleep. Finally about five days ago, I put a large crate in my bedroom to put Cookie into at bedtime.  The first night he meowed some, but the next night he did not.  Now he just goes into the crate and goes to sleep like a big boy.

Thank heaven for Cookie!  We are so happy he came to live with us.