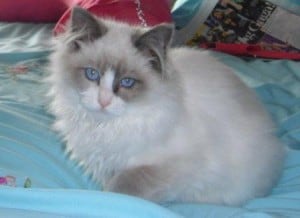 Our household is new to the world of cats. In truth, I have never been particularly fond of them! As a child I was bitten by a nasty cat (that I suspect had been abused) and had another run in with a Siamese in my teens, so I stuck to dogs which I found much friendlier and affectionate. My husband passed away 4 years ago from a brain tumor, leaving me with 3 young kids (at the time aged 18mths, 5 and 7 yrs).  I got 2 puppies to ease our grief and to keep me company after the kids went to bed at night. But after 3 weeks of trying to train them I gave up. In then end, trying to look after 3 small children and train 2 puppies just proved too much. The dogs live outside permanently and are quite happy. 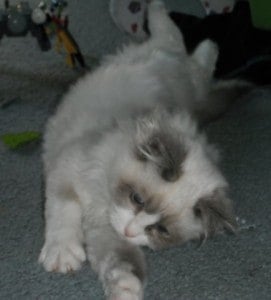 A few months ago my daughter, who is now 5, and I were in a pet shop when we saw some gorgeous kittens, just domestic ones. This got me thinking that it might be nice to have a cat inside to keep me company at night. Certainly easier to train than dogs!! And definitely less mess.

I did some research and read about Ragdolls. They sounded just like what I was looking for. I figured that if I was going to get a cat, I wanted one that was going to be affectionate and friendly, not just ignore me. So I started checking out local breeders and was sad to find that it wasn't breeding season and I may have to wait 4-6 months for a litter. I eventually found a breeder that had slightly older kittens and the kids and I visited her. Sadly the little guy I fell in love with had genetic deformities in his legs and I just couldn't bring myself to buy him. The risk of huge vet fees in the future was too high. I hadn't fallen in love with any of her other kittens but I did decide that I definitely wanted a blue bi-color male. 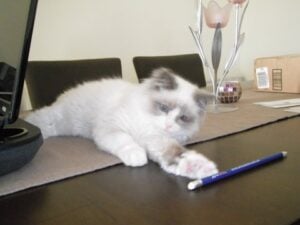 I spent the next few weeks phoning and emailing breeders and checking online and I finally came across a lady who had exactly what I was looking for: a blue bi-color male. It was the last kitten she had left and I arranged to meet her the next day. The kitten was gorgeous and my daughter and I took him home that day. He was 12 weeks old.

Initially Skittles, as he is now called, was shy and nervous so I kept him in the bathroom for a few days until he got used to us and his new surroundings. The house is fairly large and open-plan so I also wanted to make sure he knew where his food and litter bowl were. The kids and I visited him regularly and he gradually got know us and feel comfortable with us. After a few days he started to come out of his shell and I began to leave the door open so he could come out whenever he wanted to.

The lady I purchased Skittles from was not a breeder and when I took Skittles to the vet for a check up he was found to have fleas, worms and Kitty Flu.

A month on, the fleas and worms are gone but he does have scarring on one of his eyes from the Kitty Flu, which the vet says he likely had for a while before we picked him up. Other than one eye that needs daily cleaning, it poses no problem, it's just like a blocked tear duct.

Skittles has settled in beautifully and we all adore him. We call him a "stealth cat" as he loves to hide under the kids beds and attack your feet as you walk or even when you're sitting down. He loves to play hide and seek and pounces on us when we peek our heads out from behind a corner. His favourite toys are ping pong balls or cat balls with bells in them. He also loves to climb up on my lap and walk across my laptop, flicking pens and pencils across the table and watching them roll.Really, everything is a toy to him!

Skittles has a great cat tree with a few perches and a hide-hole that he enjoys and he often sleeps on one of the perches at night. He does have his own bed (a small dog bed; I know he's going to be a big cat!) but other than the first 3 days he spent in the bathroom when he arrived, he hasn't put a paw in it since. Much to my daugher's dismay (she desperately wants him to sleep on the end of her bed) he mainly sleeps on the cat tree or on the back of the couch.

When we got him, Skittles was being fed a cheap supermarket brand of food but I have now changed him to a better quality, and yes, more expensive brand of premium dry cat  food. I've worked out that it costs less than $1.50 a day to feed him premium food and I spend more than that on a cup of coffee.

I am so glad we got Skittles; I wish we had got a Ragdoll so much sooner. He is perfect for us and we just adore him.